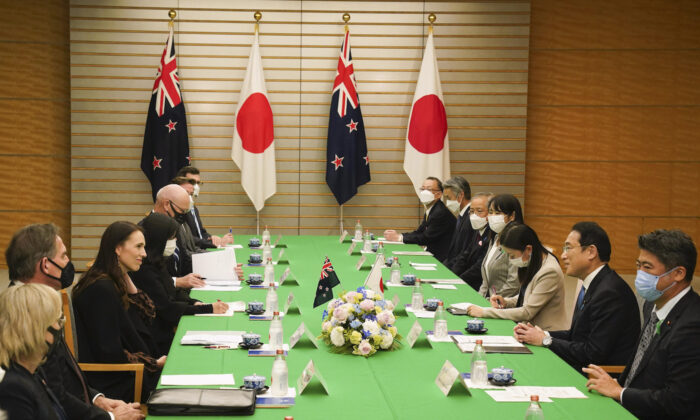 New Zealand and Japan agreed Thursday to strengthen defense cooperation and initiate formal negotiations toward an information-sharing pact as the world faces “unprecedented challenges” from the Russia-Ukraine war.

In a joint statement issued after the talks, the two leaders said they agreed to strengthen cooperation in areas like political ties, defense and security, as well as trade and economic growth.

They also agreed to commence negotiations on an information-sharing agreement to enable closer engagement on international security issues.

Ardern described Japan as one of New Zealand’s “most important partners in the Indo-Pacific region,” with which it shares common values and approaches to the challenges facing the region.

“Japan and New Zealand will work together to support economic recovery from COVID-19, combat climate change, promote peace and stability in our region and uphold the global rules-based order,” she said in a statement.

Kishida and Ardern strongly condemned Russia’s illegal aggression against Ukraine, saying it constituted “a serious threat” to the rules-based international order, with ramifications far beyond Europe and the Indo-Pacific region.

They demanded an immediate withdrawal of Moscow’s forces in Ukraine and vowed to continue implementing economic sanctions against Russia.

Their talks also covered the East and South China Seas, where Beijing has increased its military presence. The two leaders said they strongly opposed unilateral actions that seek to alter the status quo by force and escalate tensions in the disputed seas.

Both leaders reaffirmed the importance of resolving maritime disputes in accordance with international law, calling on relevant parties to adhere to the final and legally binding July 2016 Arbitral Award on the South China Sea.

Kishida said that Japan and New Zealand “will not tolerate any attempts to alter the status quo by force and oppose them in the East and South China seas or any other regions,” Japan’s media Kyodo News reported.

The meeting comes on the heels of the Solomon Islands and China officially signing a security treaty that will allow Beijing to station armed police and troops on the Pacific island.

On April 18, the United States convened a meeting with officials of Japan, Australia, and New Zealand, during which they expressed concerns about the Solomon-China deal. The White House said that Washington was concerned by the lack of transparency and “unspecified nature” of the agreement.