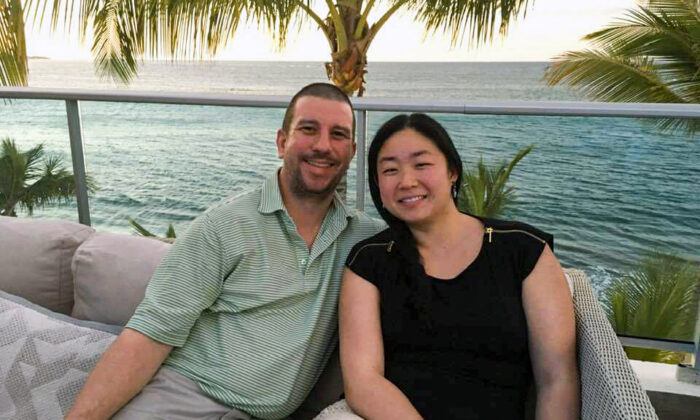 Christopher Quaglin with his wife Moria, who fears her husband could die without medical attention in federal custody. (Courtesy Quaglin Family)
US News

Jan. 6 Detainee at Risk of Dying From Lack of Medical Care, Attorney Says

A defendant being held in Virginia in connection with the Jan. 6, 2021, breach of the U.S. Capitol is extremely ill and at risk of dying because the jail refuses to provide proper medical care and a special diet for his celiac disease, New York attorney Joseph McBride alleges.

“They’re starving the guy out,” McBride told The Epoch Times. “They have moved him six times since he’s been detained. We can’t send him to a facility that’s not going to be able to take care of him.”

Christopher J. Quaglin’s case is the most recent in a series of allegations that Jan. 6 defendants have been beaten, tortured, and denied food and proper medical care while in federal custody. A group of 14 lawmakers on Jan. 3 sent a letter (pdf) to Michael Carvajal, director of the Federal Bureau of Prisons, demanding that “you use your authority to investigate this abuse or we will use our authority to investigate your failure.”

“Many instances of physical and psychological abuse, denial of medical care, 24-hour solitary confinement, denial of basic personal hygiene, denial of access to legal counsel, destruction of records, and general abuse of rights and mandated standards for prisoners have been brought to our attention,” the lawmakers wrote. The letter was organized by Rep. Clay Higgins (R-La.) and Rep. Marjorie Taylor Greene (R-Ga.).

Quaglin, who is from New Jersey, is charged in federal court with assaulting multiple law enforcement officers during rioting at the U.S. Capitol on Jan. 6, 2021. He is being held pending trial at the Northern Neck Regional Jail in Warsaw, Virginia, the sixth facility where he’s been housed since he was charged in April 2021.

McBride said the jail hasn’t provided the gluten-free diet that Quaglin needs to survive, and exposed him to inmates and guards with coronavirus that caused him to develop COVID-19. He was then placed in solitary confinement, McBride said.

“If somebody has celiac disease, the food has to be prepared the same way a Jewish person’s kosher food would be prepared: separate,” McBride said. “Everything needs to be separated, because if there is cross-contamination, you can kill him. He lost close to 20 pounds now since the 21st of December.”

McBride said if Quaglin isn’t moved to a hospital for treatment and given a proper diet, he could die. Repeated complaints to the jail have gone nowhere, he said.

In his first email reply to McBride on Dec. 28, 2021, Hull complained about the lawyer’s tone.

“You are NOT in a position to demand anything and you will find me less than helpful if you continue to act in this manner,” Hull wrote, according to a copy of the email provided to The Epoch Times.

“For the record, while New York has the reputation of being filled with people like you, as a rule y’all neither impress nor intimidate anyone,” Hull wrote. “Document anything you like or call anybody you like … it will not change anything. The inmate is receiving the appropriate level of cate [sic]. Stating completely fictitious assertions is nothing more than an obvious attempt at intimidation. And, unfortunately, you lack the ability to intimidate anyone.”

In a Dec. 30, 2021, email, McBride made a legal demand that Quaglin be moved to a hospital for emergency care and be given a celiac-safe diet. He also alleged the jail eavesdropped on an attorney-client conversation and is preventing McBride from having regular video contact with Quaglin.

“We remind you that Mr. Quaglin is a pretrial detainee, not an inmate, as such it is illegal to punish him,” McBride wrote.

A Dec. 30, 2021, email reply from Hull called McBride’s demands “pointless” and said Quaglin’s needs “are being addressed.” He said Quaglin “is just another inmate and he will receive exactly what every other inmate receives. Which is exactly what he is supposed to … nothing more, nothing less.”

“If you want to take legal action … then take it,” Hull wrote. “Politeness and professional courtesy preclude me from telling you how I feel about your ‘demands’ and your obvious lack of manners. However, my oh-so-subtle disregard for both might provide you a clue on to [sic] how I feel about them. You will do well to understand that ‘please’ is a much more useful word. Without it, I afraid [sic] it is going to be tough sledding for you.”

Celiac disease is an autoimmune disorder that causes small-intestine damage when a person eats food containing gluten, a protein found in wheat, barley, and rye. The intestinal damage can prevent absorption of nutrients and trigger symptoms such as weight loss, fatigue, diarrhea, bloating, and anemia, according to the Mayo Clinic.

Federal Bureau of Prisons spokesperson Emery Nelson said the agency wouldn’t comment on individual inmates in its care, but asserted that it upholds standards for the medical and dietary needs of all prisoners.

“The Bureau of Prisons (BOP) is committed to accommodating the needs of federal offenders and ensuring the safety and security of all inmates in our population, our staff, and the public,” Nelson told The Epoch Times in a statement. “The BOP takes seriously our duty to protect the individuals entrusted in our care.”

Nelson said the BOP annually approves a nationwide menu that “has a variety of healthy food options to accommodate the needs of every inmate in our care.”

Quaglin had been housed at the District of Columbia jail and met with U.S. Reps. Louie Gohmert (R-Texas) and Greene when they made an investigatory tour of the jail. His photo was included on the cover of “Unusually Cruel,” a report (pdf) on the jail that was issued by Greene in December 2021.

“The jail retaliated against him,” McBride said. “Marjorie and Louie were there on the 4th. Christopher was moved from there in the middle of the night to Lewisburg on the 9th. From Lewisburg, he was moved to Alexandria and from Alexandria to Northern Neck. This is all retaliatory, punitive.”

“Every time he’s moved to a new facility, he has had issues,” McBride said. “Sometimes, they get it right after a while, but that requires him to suffer for a month or so. Other times, they don’t even have time to get it right because by the time they get close to getting it right, they move him again. He has been moved three times since Nov. 9. This facility has been far and away the worst in terms of his food.”

McBride said lacking a resolution of his concerns, he will file a writ of habeas corpus and seek Quaglin’s release.