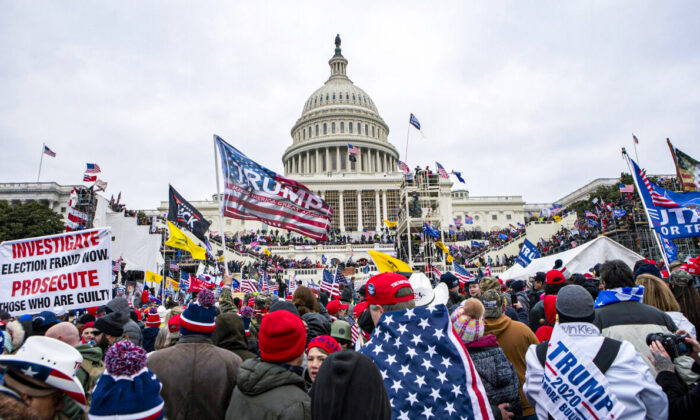 Protesters are seen at rally at the U.S. Capitol in Washington on Jan. 6, 2021. (AP Photo/Jose Luis Magana, File)
Congress

A former top adviser to the House committee investigating the Jan. 6 Capitol breach admitted Sunday there was no “smoking gun” that suggested President Donald Trump planned the breach.

Denver Riggleman, a former Republican House representative, had recently been a senior adviser to the panel. He told CNN’s “State of the Union” Sunday that there was no direct evidence that suggested the breach and protests outside the Capitol were premeditated.

CNN’s Jake Tapper asked the former lawmaker whether there is a “smoking gun” that “proves that Donald Trump or somebody around him knew that what happened January 6 was not a spontaneous outcry by his supporters, but was a planned attempt to get them to stop counting the electoral votes?”

“That probably [was] going to be very difficult to even find based on the limited authorities of Congress as far as getting data and things like that,” Riggleman ultimately conceded to CNN. However, he claimed later in the interview that the panel will reveal alleged nefarious actions carried out by Trump, although he didn’t make any specific claims.

There are “multiple groups involved,” he alleged. “And I think that’s what’s exciting about the hearings, is, they’re going to be able to put the multiple groups together. Remember, there’s different investigative teams that were looking at different parts of this the whole time.”

Riggleman on Sunday also appeared to declare his support for Rep. Liz Cheney (R-Wy.), one of the leaders on the House Jan. 6 panel and who has become more and more unpopular among members of her own party amid her outspoken opposition to Trump. Riggleman also told CNN Sunday he is no longer a member of the Republican Party.

While speaking to reporters on Friday, Navarro said that the FBI placed him in “leg irons” and said he was put in a jail cell that held would-be Ronald Reagan assassin John Hinckley Jr.

“Who are these people? This is not America,” Navarro said outside a federal court in Washington, D.C. “I was a distinguished public servant for four years.”

“They put me in leg irons, they stuck me in a cell, by the way—just a historical note—I was in John Hinckley’s cell,” Navarro said. “They seemed to think that that was like an important historical note. That’s punitive. What they did to me today violated the Constitution.”

He continued: “On Wednesday, I reached out to the Justice Department. I offered them a possible way forward. They responded with effectively the same kind of thing as you see in Stalin’s Russia or the Chinese Communist Party.”