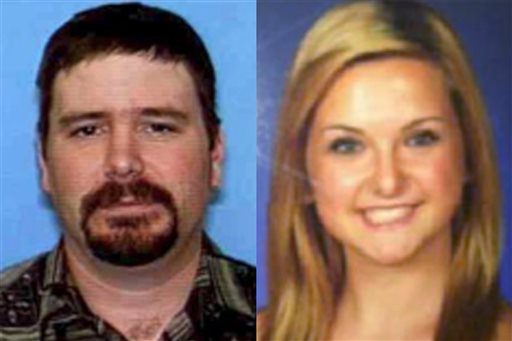 This combination of undated photos provided by the San Diego Sheriff's Department shows James Lee DiMaggio, 40, left, and Hannah Anderson, 16. DiMaggio was killed by a federal official after allegedly kidnapping Anderson and murdering her mother and brother; now, DiMaggio's family wants a DNA test to see if Hannah and her brother are his children. (AP Photo/San Diego Sheriff's Department )
News

SAN DIEGO (AP) — The family of a man suspected of kidnapping a 16-year-old girl and killing her mother and younger brother has asked for paternity tests to determine if the suspect fathered the children — a suggestion that was quickly refuted by the victims’ family.

Andrew Spanswick, a spokesman for the family of James Lee DiMaggio, told KGTV in San Diego that there are rumors that James Lee DiMaggio fathered both children and that it was odd that the suspect named the girl’s paternal grandmother as his life insurance beneficiary.

Spanswick is quoted saying the family wanted DNA samples of Hannah Anderson and, if possible, her brother to determine paternity.

“We think it’s strange he left them so much money with no explanation,” Spanswick told the ABC affiliate

Spanswick didn’t immediately respond to a message from The Associated Press. However, he said through his publicist, Cathy Griffin, that he made the statements and didn’t have anything to add.

Brett Anderson, the father of Hannah and Ethan, finds the suggestion that DiMaggio fathered the two children “disgusting,” Hess said. She said the family had not yet received a DNA request directly from DiMaggio’s family and declined further comment.

Spanswick said Monday that DiMaggio named Hannah’s grandmother, Bernice Anderson, as the sole beneficiary of his employer-issued life insurance policy, making her eligible to receive $112,000. He said he believed the money was intended for Hannah.

Lora Robinson, DiMaggio’s sister and lone survivor of his immediate family, called Brett Anderson Friday night to tell him about the payment. They had a long conversation but neither had an explanation for what had happened, Spanswick said.

DiMaggio, 40, was like an uncle to the Anderson children and Brett Anderson’s best friend. Investigators say DiMaggio escaped with Hannah and killed 44-year-old Christina Anderson and her son, whose bodies were discovered after DiMaggio set fire to his home Aug. 4 in Boulevard, a tiny town 65 miles east of San Diego.

DiMaggio used a timer to set the fire, giving him a 20-hour jump on authorities, said Jan Caldwell, a spokeswoman for the San Diego County Sheriff’s Department. Hannah was rescued on Aug. 10 in a shootout with FBI agents in the Idaho wilderness.

Caldwell declined to say if Brett Anderson’s DNA was used to identify his son’s remains. Authorities have said they extracted DNA from the boy’s bone marrow.