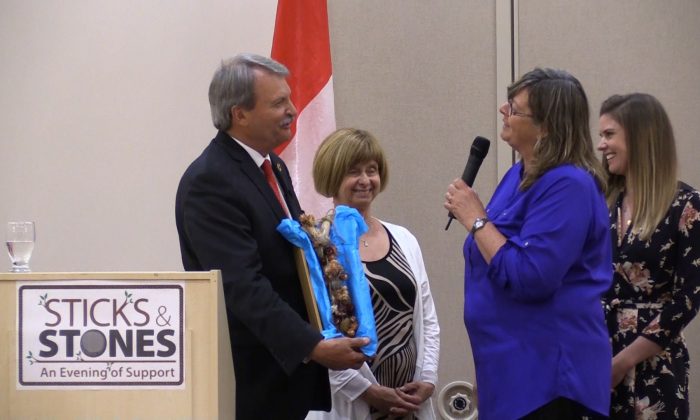 Organizer Marlene Black presents Ontario MPP Jack MacLaren with a “sticks and stones” gift at a dinner event in Kenata on May 28, 2016. MacLaren’s wife Janet is on his left, and his daughter Alexis is on the far right. (Limin Zhou/Epoch Times)
Canada

Jack MacLaren: ‘Words do hurt and do a lot of harm’

OTTAWA—After Ontario MPP Jack MacLaren made a controversial joke about a local female politician and her husband, he got a lot of bad press and was suspended and sent for sensitivity training by his party.

That training, MacLaren said at a dinner event titled Sticks & Stones organized by his supporters on May 28, was a learning experience for him in that “we have to be more conscious of the things we say and that sometimes inadvertently we can say words that might offend someone even when no intention to offend is meant.”

“So, question period might be a place for tough questions and harsh words, but elsewhere we need tolerance, respect, sensitivity, and patience. I am proud to have relearned this lesson recently, and to share it with you,” he told the crowd of about 200 people at the Intercultural Dialogue Institute in Kanata.

He said the “sticks and stones” schoolyard taunt isn’t necessarily true—words can hurt.

“When I was a boy I often heard a phrase ‘Sticks and stones may break my bones but names can never hurt me,'” he said. “[But] names are often hurtful. The phase was untrue. Words do hurt and do a lot of harm.”

MacLaren made the sex-related joke about Liberal MP Karen McCrimmon and her husband at a “men’s night” after the local Carp Fair in his riding of Carleton-Mississippi Mills in March.

After the news of the incident emerged, Progressive Conservative leader Patrick Brown demoted MacLaren from his role as the regional representative in the party’s caucus, suspended him, and asked him to take sensitivity training.

Sheila James, a farmer living in MacLaren’s riding who attended the dinner event, said she was upset about the portrayal of MacLaren after the incident.

“When I heard in the press so many people were saying bad things about Jack, it broke my heart,” she said in an interview. “Jack does nothing but help me, in my situation in Carleton Place. I was happy to be able to come and support him.”

Roch Lalande, the CEO of EmbroidMe, a marketing and branding company, said he too was saddened by what happened. He thought MacLaren was betrayed somehow and that the media had blown things out of proportion.

“Jack is not a typical politician, which is a good thing,” said Lalande. “He works hard for his constituents, and he got into trouble because people didn’t like what he said. You can argue what he said at that event was good or bad—it doesn’t matter, he was among friends and somebody betrayed him and the media seems to have gone overboard.”

The dinner party was also a charity fundraiser for victims of the Fort McMurray fire. One of the organizers, Marlene Black, said that she and a few friends put on the event because “we know Jack has done an awful lot of work for an awful a lot of people and we thought he needs a little bit of help and celebration.”

Another organizer, Shirley Dolan, said she was pleased with the turnout. She said people came because “they really like Jack, they really like his wife Janet, they just wanted to come out to support him, and say ‘page turned, we are going forward.'”

Attendee Grace Joubarne said she considers MacLaren to be “a politician who truly fills the gap—and there is a huge disconnect between politicians, the government, and people.”

“He is not your stereotypical politician … he is one of those people who is just so passionate in his normal, natural, genuine, authentic way. You can’t help but love the man,” she said.

“I like truth, not what is politically correct,” said Zeljlo Malenica, president of a construction company in MacLaren’s riding, when asked what motivated him to come to attend the event.

“Jack is a nice guy, as far as I can see. For people who need help he is there to help … and this little good should be defended.”

MacLaren said in his speech that he plans to run for office in the next election.