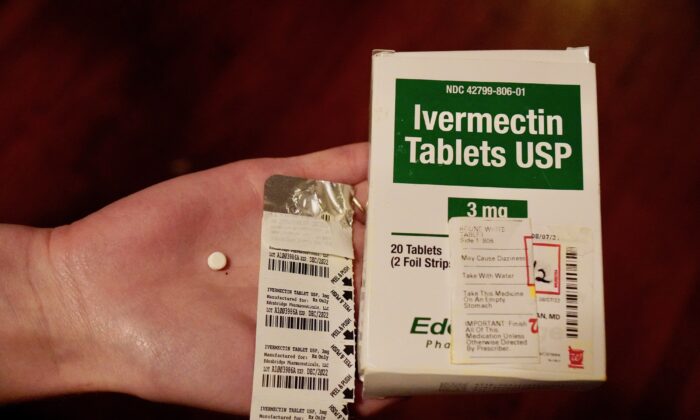 Ivermectin packaged for human use widely prescribed for decades for a range of maladies, including for treatment of lice, other parasites and viruses. (Natasha Holt/The Epoch Times)
WORLD

A Japanese conglomerate that is studying the anti-parasitic drug ivermectin has found that the medication had an antiviral effect on Omicron, according to joint non-clinical research.

Kowa Co. Ltd., a conglomerate with interests in trading, hospitality, and electronics, along with health and medical applications, issued a press release (pdf) on Jan. 31 stating that ivermectin has been found to be effective against Omicron in in vitro studies. The firm is also in the process of carrying out a Phase 3 clinical trial on the use of ivermectin to treat COVID-19 patients, though the company’s remarks on effectiveness pertain to the findings of lab-based research.

Kowa representatives didn’t respond to a request for comment by press time.

The company, working with Kitasato University based in Tokyo, said that ivermectin has the “same antiviral effect” on all “mutant strains,” including Alpha, Delta, and Omicron. Kowa added that ivermectin suppresses invasion of the virus and inhibits its replication.

“[Ivermectin] is expected to be applied as a therapeutic drug (tablet) for all new coronavirus infectious diseases,” the report said.

Ivermectin has been used by the World Health Organization for over 30 years to treat parasitic infections. Volunteers have distributed the drug in African countries where it has been found to be extremely effective, said the Kowa report.

However, the treatment has been mired in controversy during recent times as the U.S. Food and Drug Administration (FDA) has not approved the use of ivermectin as a treatment for COVID-19, even though the drug is used in humans to treat a variety of conditions.

The FDA has refused to respond to a Freedom of Information Act request (FOIA) asking for details about any reports of side effects related to the use of ivermectin in treating COVID-19 while publicly denouncing its usage.

The federal government pays hospitals across the country to treat COVID-19 patients, but the payment is tied to approved methods, and ivermectin is not part of the protocol.

However, families desperate to save their loved ones are resorting to secretly sneaking the drug into hospitals as a last-ditch effort that often ends up helping the infected person recover.

A bill has been presented to make New Hampshire the first state in the country to make ivermectin part of the approved COVID-19 treatments and offer it as an over-the-counter medication.

“I have absolutely no doubt lives will be saved if human grade ivermectin was available to COVID patients,” state Rep. Leah Cushman, a Republican and also a registered nurse, told The Epoch Times about her proposed bill HB1022.

The detractors of using ivermectin have claimed that the drug is extremely dangerous. “I would never want this medication prescribed to myself or my family and would take legal action against anyone who recommended this to my loved ones,” Dr. David Levine of Dartmouth-Hitchcock Medical Center wrote in his written testimony on the bill.

Dr. Paul Marik, a supporter of using ivermectin, testified that ivermectin “is one of the safest drugs on the face of this planet.”

Marik, who is a co-founder of the physician-comprised advocacy group Front Line COVID-19 Critical Care Alliance, said ivermectin is approved for the treatment of viruses in 79 countries.

“So somehow Japanese people, Indian people, Brazilian people can tolerate it safely, but it’s toxic in Americans. You have to be kidding,” Marik said.

Marik was forced to resign from his position at the Eastern Virginia Medical School over legal battles regarding the usage of alternate treatments for COVID-19, including using ivermectin.

Correction: This article has been updated to make clear the findings released by Kowa were based on non-clinical trial data. The proposed bill number was incorrectly stated. The Epoch Times regrets the errors.