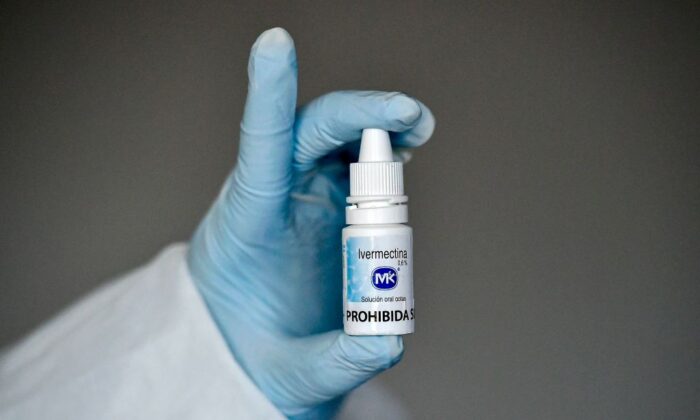 A health worker shows a bottle of ivermectin, a medicine authorized by the National Institute for Food and Drug Surveillance to treat patients with mild, asymptomatic or suspicious COVID-19, as part of a study of the Center for Paediatric Infectious Diseases Studies, in Cali, Colombia, on July 21, 2020. (Luis Robayo/AFP via Getty Images)
Health

Ivermectin Highlighted for Early Prevention and Treatment of COVID-19

Doctors at a recent Senate hearing stressed the importance of more research and guidance on the early or preventative treatment of COVID-19 in the fight against the CCP virus, even after the roll-out of vaccines.

The Senate Homeland Security and Governmental Affairs Committee, led by Sen. Ron Johnson (R-Wis.), held a second hearing on early outpatient treatment for COVID-19 on Dec. 8 to “discuss early treatment options that attack the disease in the first stage by limiting viral replication” in hopes of preventing disease progression, hospitalizations, and deaths.

Dr. Armand Balboni, CEO of Appili Therapeutics Inc., said there’s a need for options to combat the virus at various stages, particularly “at the moment of exposure or confirmed infection.”

Antiviral drugs that target the CCP virus, particularly ones that are safe and can be “easily manufactured and distributed globally,” can fill the role in treating COVID-19 outside of a hospital setting.

The Centers for Disease Control and Prevention’s guideline for people who test positive for the CCP virus is to quarantine and self-monitor symptoms. Treatments are provided when an individual requires hospitalization.

Data shows that certain repurposed drugs can treat the early phase of COVID-19, so the scientific community and federal health agencies should be encouraging, instead of “discouraging, and in some cases prohibiting, the research and use of drugs that have been safely used for decades,” Johnson said.

“In fact, there has been a concerted effort to block doctors who actually treat COVID patients from compassionately using their ‘off label’ prescription rights for early treatment protocols.”

An off-label prescription allows doctors to prescribe a drug approved by the Food and Drug Administration (FDA) for a condition other than its intended use “when they judge that it is medically appropriate for their patient.” It’s a common and legal practice in the medical community.

Scientists are finding that ivermectin—an oral drug that treats scabies, parasitic infections, river blindness, and rosacea in humans—is also effective in treating COVID-19. The drug is on the World Health Organization’s List of Essential Medicines.

Dr. Jean-Jacques Rajter, a pulmonologist in Florida, was one of the first doctors to use ivermectin to treat patients with severe COVID-19 symptoms early on in the pandemic. This “laid the foundation” for him and his co-authors to conduct a retrospective observational study that found a much lower mortality rate in hospitalized patients given ivermectin than those in a standard care group.

Rajter says that ivermectin was soon adopted as part of the hospital’s treatment protocol for COVID-19, and more than seven months later, “the success rate of the Ivermectin based protocol is now far superior to what it was in its early days.”

He says more randomized controlled trials are needed to confirm the “preliminary findings” and address any safety concerns on the use of ivermectin. Yet, while his team “has multiple study protocols in place, ready to be implemented in short order,” funding and support for such a study has been difficult.

Dr. Pierre Kory, a pulmonologist at Aurora St. Luke’s Medical Center, said at the hearing that he and members of his organization at Frontline COVID-19 Critical Care Alliance have spent “almost nine months tirelessly reviewing the scientific literature to gain insight into this virus and the disease process and to develop effective treatment protocols” while treating COVID-19 patients.

They have developed a protocol called I-MASK+ to prevent and treat early symptoms of COVID-19 after extensive research on ivermectin.

“In the last three to four months, emerging publications provide conclusive data on the profound efficacy of the anti-parasite, anti-viral drug, anti-inflammatory agent called ivermectin in all stages of the disease,” Kory said.

“Ivermectin is highly safe, widely available, and low cost,” he said. “We now have data from over 20 well-designed clinical studies, 10 of them randomized, controlled trials, with every study consistently reporting large magnitude and statistically significant benefits in decreasing transmission rates, shortening recovery times, decreasing hospitalizations, or large reductions in deaths.”

In his closing statement, Kory pleaded for the National Institutes of Health (NIH) to look at his organization’s review of the available data on ivermectin that has not been peer-reviewed.

“All I ask is for the NIH to review our data that we’ve compiled of all of the emerging data. … We have immense amounts of data to show that it must be implemented and implemented now.”

The NIH doesn’t recommend the use of ivermectin except in a clinical trial.

The FDA says ivermectin “should be avoided,” as its benefits and safety haven’t been established and that “testing is needed to determine whether ivermectin might be appropriate” for prevention and treatment of COVID-19.

Information about ivermectin hasn’t been updated since Aug. 27 on the NIH’s website, or since May 1 on the FDA’s website, although more clinical data have been published about the drug in preventing and treating COVID-19.

Remdesivir is the only FDA-approved drug for treating hospitalized COVID-19 patients who require oxygen supplementation. Yet studies show no effect on mortality and only a small benefit on time of recovery (hospital discharge by about 1 to 3 days.)

The most recent study, involving 1,033 hospitalized patients, found that a combination of remdesivir and baricitinib, an anti-inflammatory drug, allowed patients to recover a median of one day quicker than those in the control group consisting of remdesivir and a placebo.

Other COVID-19 treatments such as monoclonal antibodies and dexamethasone have been granted emergency use authorization by the FDA.

The monoclonal antibodies are prescribed for mild to moderate outpatient COVID-19, although there is “insufficient data from clinical trials to recommend either for or against the use,” while dexamethasone, the only repurposed drug, has been effective in treating severe COVID-19 symptoms.

Dr. Jay Bhattacharya says the lack of funding for randomized trials on existing drugs for early intervention of COVID-19 is leaving some scientists and physicians to not prescribe certain drugs or other therapies despite their effectiveness.

Bhattacharya, a professor of medicine at Stanford University, says this is where the NIH can play a role.

“In principle, the NIH exists to solve this market failure,” Bhattacharya says. “It could and should use its resources to help fund randomized evaluations of these drugs for off-label purposes.”

The NIH didn’t immediately respond to a request for comment.

Johnson said that prior to the hearing, he and the physicians were attacked by media calling it “dangerous, and instead of waiting until after the hearing to trash this information and our witnesses, The New York Times and other publications have already run pre-emptive attacks, implying this hearing is anti-vaccine.”

Sen. Gary Peters (D-Mich.), the only Democrat present at the hearing, in his opening statement before walking out, accused the committee of being “used as a platform to attack science and promote discredited treatments.”

“Sadly, it appears that today’s hearing will follow the same path, playing politics with public health, and will not give us the information we need to tackle this crisis,” Peters said. “The panelists have been selected for their political, not their medical, views.”

Johnson said he doesn’t understand the “concerted effort to silence the voices” of health professionals promoting early treatments for COVID-19.