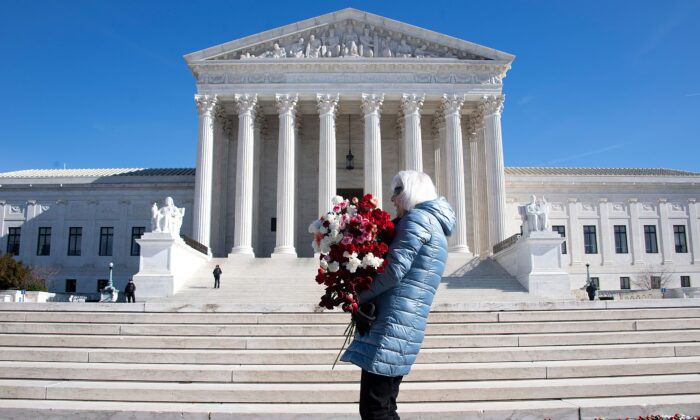 A woman helps lay 3,000 carnations to represent the approximately 3,000 abortions that occur in the United States every day, on the 46th anniversary of the Roe v Wade decision, in front of the U.S. Supreme Court in Washington on Jan. 22, 2019. (Jim Watson/AFP via Getty Images)
Viewpoints

The Supreme Court has agreed to review the constitutionality of a Mississippi statute banning most abortions after 15 weeks of pregnancy. The court should use this opportunity to liberate America from the long nightmare of nationalized abortion policy. It should overrule Roe v. Wade.

Politically, Roe has proven to be the most divisive Supreme Court ruling since Dred Scott v. Sandford, the notorious case that helped provoke the Civil War. Since Roe nationalized abortion policy in 1973, abortion has become fodder for special interests that poison civic life. Roe is a major reason judicial confirmation hearings have become arenas for slander and political assassination.

Further, Roe’s nationalization of abortion diverts federal elections and policymakers from issues the Constitution actually assigns to the federal government, such as foreign and budgetary policy.

Roe violated a rule that courts don’t adjudicate “political questions”—those that can’t be answered using “judicially discoverable and manageable standards.” Before a court decides an issue, that issue must be one the judge’s legal training equips him to decide.

But Roe and the Supreme Court cases following it force judges to address such questions as:

Does a state restriction impose an “undue burden” on abortion?

How does a state legislature balance protection of fetal life with “reproductive freedom?”

Does the value of fetal life increase with the progression of pregnancy? If so, what restrictions that are invalid for a woman at 10 weeks become valid at 20 weeks? 30 weeks?

Is a regulation appropriate for the city of Houston inappropriate in rural Texas?

Issues of that kind are quintessential legislative policy questions. They don’t belong in a court of law. Only within the realm of abortion do the courts fail to recognize that fact.

Now let’s turn to the constitutional aspects of Roe.

Roe v. Wade pretends to be constitutional law, but it’s not. It’s an absurd ruling stemming from arrogant decision-making and misuse of history. Even leading pro-choice scholars have acknowledged Roe’s defects.

To understand why the ruling in Roe was absurd, let’s start with some background.

The Bill of Rights, ratified in 1791, included 10 constitutional amendments protecting a long list of personal rights against federal abuse. Among them was the Fifth Amendment’s prohibition on the federal government denying a person “life, liberty, or property, without due process of law.”

The 14th Amendment, adopted in 1868, contained a shorter list of rights that protected against state abuse, including the rule that states may not “deprive any person of life, liberty, or property, without due process of law.”

The Roe court ruled that the right to abort was protected by the 14th Amendment’s due process clause.

Many books and articles have elucidated Roe’s constitutional defects. Here’s an overview:

First: In Roe, the Supreme Court held that abortion was a “liberty” protected by due process, in part because abortion was generally legal in 1868. But the court’s treatment of history was deeply flawed. For example, the justices misunderstood the former meaning of legal terms such as “misdemeanor.”

Second: As its name indicates, the due process clause is about process—that is, procedure. As explained below, it regulates how the state must prosecute private citizens. It has nothing to do with substantive law.

Third: When the Constitution was written, the phrase “due process of law” was centuries old, and its meaning was plain: If government prosecutes you criminally or civilly, it must follow pre-existing procedures. It can’t make up the rules as it goes along. Or, alternatively: When the government proceeds against you, it can’t change procedures retroactively. Due process has nothing to do with abortion.

Fourth: Some writers admit the Fifth Amendment due process clause is narrow, but insist the 14th Amendment version is much broader. They claim court cases decided between 1791 and 1868 widened the definition.

A rule of legal interpretation says that when the same word or phrase appears more than once in a document (such as the Constitution), then the word or phrase is presumed not to change meaning. The burden of proof, therefore, is on those who claim “due process of law” is wider in the 14th Amendment than in the Fifth.

Have they carried that burden? No. Several years ago, I examined the 1791–1868 cases they cite. I found that they had been misunderstood. All were merely applications of the traditional due process “anti-retroactivity” rule. And there was no suggestion anywhere in those cases—or in any other contemporaneous sources—that “due process” included abortion.

Fifth: The Constitution’s text also tells us that “due process” is a fairly narrow right. It’s only one of many rights the Constitution lists. Other rules of interpretation tell us that when you see a list like that, you should presume that each item says something different and that the scope of each item is similar.

Suppose, for example, a wife tells her husband to buy “lettuce, carrots, broccoli, and cabbage.” But the husband brings home only lettuce, carrots, and a double-helping of broccoli. She asks, “Where’s the cabbage?” He responds, “Well, dear, if you knew your botany, you’d know that broccoli is a member of the cabbage family. By purchasing broccoli, I thereby purchased cabbage.”

Of course, this smart aleck knew that when his wife said “broccoli” she didn’t intend the widest possible meaning. That’s why she listed “cabbage” separately. This husband is on the direct route to what we hubbies call “Big Trouble.”

Similarly, the fact that “due process of law” is accompanied by many other enumerated rights tells us that due process isn’t a mixed salad of other rights. It means only, as explained above, that when the state prosecutes you, the state has to follow pre-established procedures.

Sixth: Advocates of Roe v. Wade argue that because it’s 48 years old and people have relied on it, it has become a “super precedent.” They therefore argue courts should venerate it more than it deserves.

This is self-serving rubbish. For one thing, no one relies for more than nine months on the availability of abortion, other than the people who profit from it. If abortion became a state issue again, state legislatures could—and no doubt would—take such reliance into account.

More fundamentally, the same people who claim “super precedent” status for Roe applaud when the court reverses heavily relied upon cases of even longer standing. For example, in 1896, the Supreme Court upheld state racial segregation. That case lasted 10 years longer than Roe, and people and institutions relied very much upon it. Yet advocates of Roe universally praise the court for (properly) overruling it.

Few of Roe v. Wade’s knowledgeable defenders think it’s well-reasoned constitutional law. They think merely that, as a matter of policy, abortion ought to be freely available.

They’re entitled to that belief. But they’re not entitled to misrepresent the Constitution. They are, furthermore, free to lobby for their policy preferences. But they should do so in the legislatures, just as the rest of us must do when we promote issues we care about. They have no right to impose their views on us by judicial fiat.

The Supreme Court must de-nationalize abortion before the issue tears apart our country and Constitution. The court must overrule Roe v. Wade.

Robert G. Natelson served as a law professor for 25 years at three different universities. He is senior fellow in constitutional jurisprudence at the Independence Institute in Denver and author of “The Original Constitution: What It Actually Said and Meant” (3rd ed. 2014).