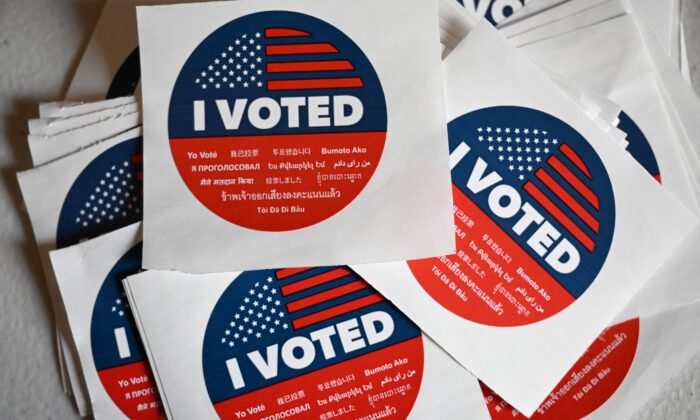 “I Voted” stickers are seen during early voting ahead of the U.S. midterm elections in Los Angeles, Calif., on Nov. 1, 2022. (Robyn Beck/AFP via Getty Images)
Viewpoints

When I was a kid, I used to vote with my father. I remember accompanying him behind the curtain and watching him pull the mechanical lever they had in those days.

It felt like something important and I was proud, as a 9-year-old, to be with him as he did his civic duty.

That was 1952, the first Dwight Eisenhower–Adlai Stevenson presidential election, and my father was “Madly for Adlai” as the campaign theme went, though I think in today’s terms, he might be considered more or less conservative in his views, at least as I remember them.

The furthest thing from my young mind then was that there was any kind of cheating going on. This was the government and they were good. They could do no wrong.

Voting was exciting and this was America, the land of the free.

My positive attitude toward elections continued when, as a young adult living in the Echo Park section of Los Angeles, my house, it turned out by tradition, was the neighborhood polling place.

So I would come down in my bathrobe around 7 a.m. to let in the poll workers and be the first to vote myself—sort of a one-man Dixville Notch, but, unlike that New Hampshire town, there were never any reporters around to record my decision.

In those days, it was always Democratic anyway.

Later still, when my politics had shifted to the GOP, I still enjoyed voting. I had had some luck at screenwriting and had moved to the tonier Hollywood Hills, where there was nary a Republican in sight.

That meant on Election Day I could walk right into our local polling place and vote in five minutes, while the poor Dems waited in lines that sometimes seemed to stretch all the way down to Hollywood Boulevard. (Well, that’s an exaggeration, but you get the idea.)

It also made my wife and me at times feel like unicorns, odd man and woman out, in the eyes of our neighbors. It wasn’t always comfortable, but by then, we were talking about leaving, becoming those internal American refugees that left blue states for red.

So we ended up in Tennessee and one of the first things we did was get voting cards in our new home. I felt proud again. I would support candidates who might actually win for once. And I have.

By that time, however, the attitude of many toward the whole nature of voting had changed. We had become awakened to the fact that there might be serious fraud going on.

I have to confess that I was somewhat late realizing this. I was aware of the allegation that Chicago Mayor Richard Daly skewed Illinois for Kennedy over Nixon, but that was back in 1960, ancient history (sort of).

The 2020 presidential election was another matter. As everyone knows, it has been the subject of extraordinary controversy that hasn’t been resolved.

In fact, it’s very hard in our country to determine if there is any way of definitively deciding if an election is fair. The courts don’t seem to have done a very good job of it and if you protest, you run the risk of being incarcerated.

The system almost everywhere seems to be some degree out of whack.

Our democratic republic wasn’t set up for this, but it should have been.

My best guess is that the 2020 election could well have been stolen, though I wouldn’t swear to it.

But that’s not the point of this article. What concerns me is the feeling that I—and I imagine many others–now have when we walk into the polling booth or cubby or whatever it is, depending on your state.

There’s a lot of machinery there we may or may not trust.

This makes voting a disturbing task, rather than the joyous assertion of democracy that it should be and as it was for me as a kid when I accompanied my father.

Here in Tennessee, there are already problems with people voting in the wrong district, as reported by The Associated Press (not that I trust them anymore, but apparently, in this case, they are correct).

But more important was the actual experience of voting. I voted the other day here in Nashville and a nice lady walked me through the process, as she did with others, making sure I didn’t make a mistake, since it’s not always easy to remember what to do year-to-year and they change it anyway.

After I voted, I was given a chance to check my vote on a card that was printed. Then, I was escorted to another computer, where I inserted my card so my vote could be counted.

That done, I asked for a receipt—some record of my vote with a number on it so, if there was a dispute, I could be sure it was counted accurately.

I was told, nope, sorry, that doesn’t exist.

What I was offered in lieu of a receipt—a trackable record of my vote—was one of those little stickers for my lapel that says “I Voted!”