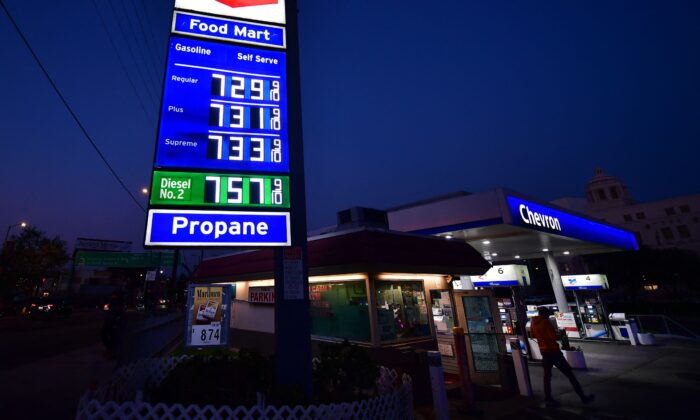 Gas prices of more than $7.00 per gallon are posted at a downtown Los Angeles gas station on March 9, 2022. (Frederic J. Brown/AFP via Getty Images)
Viewpoints

My wife Debbie and I chuckled at the recent CBS News headline, “3 reasons why gas prices are so high—and when they might come down.” The article, written by Aimee Picchi, was a basic regurgitation of the propaganda of the Biden administration.

First—big surprise!—the article blames Vladimir Putin. Yes, but gas prices began surging long before Putin invaded Ukraine. No one denies that Putin’s invasion has exacerbated the problem, but who caused the problem in the first place?

Second, the article points to a “post-pandemic demand for gas.” Evidently, people are getting back to normal after a longish period of confinement, and so they are using more gas. Yes, but this only means there should have been an ample gas reserve created due to the lockdowns, so that when demand resumed, there would be plenty of fuel on the market. Why is this not the case?

Third, the article blames OPEC and other oil-producing nations for “cuts to oil production.” Again, when there’s a global reduction in supply, and no corresponding reduction in demand, we can expect global oil prices to rise. So there’s a grain of truth in this explanation.

But this explanation—indeed all three—beg a larger question: Why has President Joe Biden suppressed domestic oil and gas production, which would certainly help to offset the costs of global instability, post-pandemic demand, as well as OPEC production restraints?

Biden emphatically denies that he has held back domestic energy production.

“It’s simply not true that my administration or policies are holding back domestic energy production,” he said. Normally an outrageous statement like this would be subject to innumerable fact checks.

But not in this case. The fact-checking industry is basically a sham. It exists to combat and contest claims critical of the Biden administration while covering for the administration’s own propaganda and prevarication. Let’s go to chapter and verse to prove this point.

Just a few weeks ago, the Biden administration froze new drilling permits and blocked leases on federal lands after a court ruled they couldn’t invoke a higher “social cost of carbon” to achieve this objective. In order to spite the court, the Biden team essentially shut the whole process down.

This latest move is consistent with what Biden has been doing since he first came into office. One of his first moves was to sign an executive order banning new oil and gas leases on federal land. That affects a huge portion of U.S. energy production. The measure was eventually halted by the courts, but over the vehement opposition of the current administration.

Prior to gas prices hitting record highs, Biden’s Democratic and left-wing allies commended the administration for acting so decisively to limit fuel production. One of their central claims was that America didn’t need more oil; there was plenty in the existing store to satisfy domestic needs.

Who can forget that Biden also shut down the Keystone XL pipeline on his very first day in office, despite the immediate toll of a loss of thousands of well-paying jobs? Actually, this measure was part of a larger project to reverse what the Biden administration boasted were more than 100 Trump-era policies, several of them dealing with energy production.

In conjunction with Biden’s policies, a number of Democrat-run states have banned or proposed banning fracking, which is an effective way to reach hard-to-access energy sources. The war against fracking is based on a series of exaggerated and unproven allegations, such as that fracking causes earthquakes, fracking is dangerous for human health, and other such nonsense.

With the backing of Democrats in Congress, the Biden administration has also sought to terminate a wide range of tax benefits for drilling and exploration. This effort is explicitly aimed at deterring additional oil and gas development. Biden’s goal has been to subsidize renewable energy while penalizing fossil fuels—all part of his promise to “end fossil fuels” in America.

For more than a year, the media has cheered Biden in these efforts, which environmental activist Bill McKibben wrote “may well mark the official beginning of the end of the fossil-fuel era.” McKibben said Biden had launched a “shock-and-awe” campaign against the U.S. energy industry aimed at sending “a decisive signal about the end of one epoch and the beginning of another.”

In sum, this is Biden’s energy crisis—much as the administration and its allies are now working strenuously to deny it. Putin and OPEC might have made it worse, but Biden created this problem in the first place. If I were running the Republican Party, I’d have voter registration signups at every gas station in America. Citizens may not be able to do much about energy prices right now, but they can act decisively in November to elect new representatives.