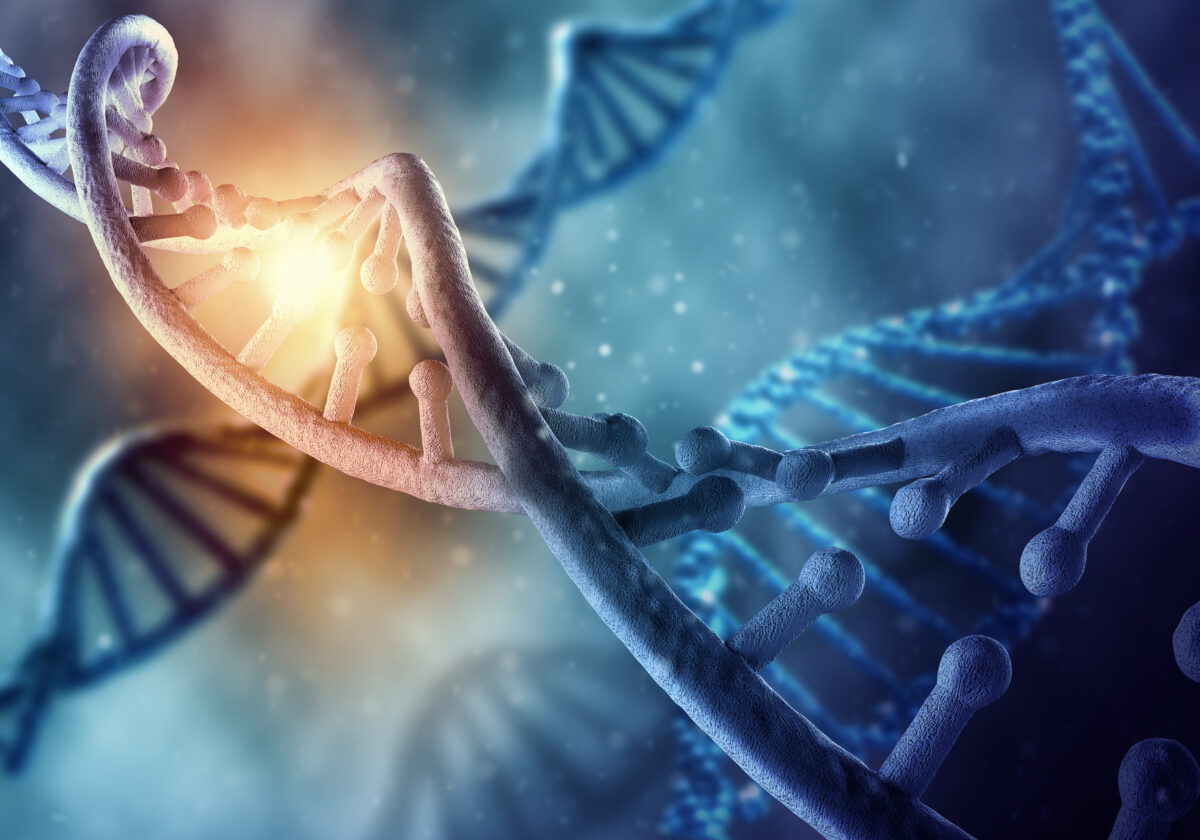 When the COVID-19 vaccines were first developed and administered, some people were concerned about whether the mRNA vaccines might alter DNA, the human body’s core genetic material. At the time, many government agencies and experts made it clear that this concern was misplaced.

However, some recent studies have found that the mRNA in vaccines can actually become embedded in DNA. The results of these studies have overturned previous knowledge. Does it mean that in an attempt to protect some people from serious illness caused by SARS-Cov-2 we’ve opened Pandora’s box?

Why Did People Initially Think That Vaccines Wouldn’t Affect Genes?

According to the central dogma of molecular biology, DNA is generally transcribed to produce RNA, and the RNA is translated into proteins. In addition, in the presence of unique polymerases (such as RNA-dependent DNA polymerase, also called reverse transcriptase), RNA can be reverse transcribed into DNA.

In addition, RNA can be easily broken down. So, the majority of the experts believed that infection with a virus or inoculation with an mRNA vaccine would not affect people’s DNA.

Regarding this issue, Dr. Xiaoxu Sean Lin, an American virologist and former lab director of Walter Reed Army Institute of Research, Viral Diseases Branch, said that if the genetic information of the RNA virus itself can express “reverse transcriptase,” then it can reverse transcribe the RNA into DNA, and the RNA then becomes embedded in the human chromosome. HIV, for example, has such an ability.

“This process allows the virus to remain latent in the human body for a long time,” Dr. Lin explained. Under the right circumstances, the viral DNA fragment inserted into the chromosome can be reactivated and transcribed into RNA, and it would then express the corresponding protein to resume active replication of viruses.

Nevertheless, although SARS-CoV-2 is an RNA virus, it is not a retrovirus, and its genome does not contain a gene for reverse transcriptase. In addition, it completes the replication cycle outside the nucleus, and it does not enter the nucleus, where DNA is stored. So most experts believed that it could not reach or change the DNA.

SARS-CoV-2 is Able to Alter DNA

A study conducted last year overturned people’s perception. Although SARS-CoV-2 is not a retrovirus, its RNA was somehow reverse transcribed into DNA and further integrated into the human chromosome.

In May 2021, the Massachusetts Institute of Technology published a study in the Proceedings of the National Academy of Sciences (PNAS) that revealed an unexpected finding. That is, after SARS-CoV-2 infects human embryonic kidney cells, the virus’s RNA can be “reverse transcribed” and further integrated into the host cell’s genome.

This paper did not study how the SARS-CoV-2 RNA was reversed transcribed into DNA in the human cells. Since the virus does not encode reverse transcriptase, there must be a certain cellular mechanism behind this process. One potential mechanism might be through the work of human theta polymerase, which was found by researchers in Thomas Jefferson University to be able to reverse transcribe cellular RNA into DNA and provide a mechanism to repair DNA based on RNA sequences.

Exons are the part of the genome that actually expresses the proteins. Exons affect a person’s appearance, weight, immunity, and other bodily functions.

Dr. Yuhong Dong, an infectious disease doctor and chief scientist at a biotechnology company, said that only 1.1 percent of the normal human genome is spanned by exons. However, in this study, 29 percent of the SARS-CoV-2 viral sequences were flanked by exons. It appears that this integration is not random, and the virus’s RNA is more likely to go into exons. This suggests that there may be changes in cell structures or functions.

The researchers further discovered that characteristic DNA fragments had appeared around the sequences of viral genes embedded in human chromosomes, suggesting that the virus had utilized a cellular retro-transcription mechanism, such as LINE1, thereby retro-transcribing its own RNA into DNA and inserting it into the chromosome.

LINE1 (long interspersed nuclear elements) are a gene sequence that makes up a large proportion of the chromosome. Normally, they are mostly inactive. However, they can become active under special circumstances and insert exogenous DNA fragments into the human chromosome.

“To a certain extent, it can be said that viral genetic sequences interfere with human chromosomes,” said Dr. Lin. However, he believes that it is not that simple. There are two keys to this issue: how efficient the insertion process is, and whether or not it happens often.

On the other hand, the MIT study used different cell lines for the in vitro experiments. These cells were mostly differentiated from cancer cells, in order to survive better in the in vitro environment. Therefore, their metabolic mechanisms are different from those of normal cells.

The mRNA vaccine technology invented by Hungarian scientist Katalin Kariko was first used in basic research on oncogenes, but it was unsuccessful. It was later applied to healthy people on a massive scale for the first time, due to the Covid-19 pandemic.

When the mRNA vaccines were first introduced, there were concerns that they might alter human genes, since the mRNA uses a gene segment from the spike protein, which is a part of the RNA sequence of the SARS-CoV-2.

In February 2022, a study conducted at Lund University in Sweden was published in the medical journal Current Issues in Molecular Biology (CIMB). It showed that six hours after entering human liver cells in vitro incubation, an mRNA vaccine (i.e. Pfizer-BioNTech vaccine) was able to “reverse transcribe” into these cells and affect human genes.

Dr. Lin commented, “This study has challenged the topic that people dare not to touch, that is, whether or not the mRNA vaccines are genotoxic.”

The experiment was conducted in vitro using liver cells. The researchers added 0.5 micrograms, 1 microgram, and 2 micrograms of mRNA vaccine in the cell culture media respectively. After 6 hours, 24 hours, and 48 hours, the polymerase chain reaction (PCR) technology was employed to observe the presence of the mRNA vaccine gene sequences in the DNA of these cells.

If the target DNA fragment exceeds 400 base pairs, the amplified DNA segment can be seen at a specific location by electrophoresis. Figure 3 shows some of the results of this experiment. Compared to the control group without the mRNA vaccine treatment, in the liver cells treated with the mRNA vaccine, DNA fragments corresponding to the vaccine mRNA did emerge. That is, the mRNA did not just stay at the mRNA stage, it instead became further embedded in the cells’ DNA.

On the other hand, the researchers were also contemplating the cellular mechanism, which was used by the mRNA vaccine to become embedded in DNA. Based on the aforementioned virus-infected cell experiments, they speculated that it might be the LINE1 mechanism. So the researchers examined the LINE1 gene and found that LINE1 did become more active in the mRNA vaccine-treated cells during the first six hours of the experiment.

Nevertheless, the experiments provided only two pieces of indirect evidence for the “gene embedded in human DNA” and “increased LINE1 activity,” without specifying how the two events were related.

What Is the Impact of Exogenous Genes Entering Chromosomes on the Human Body?

“We humans have always been developing various genetic technologies that we think can cure or prevent diseases for the human race,” said Dr. Dong. She thinks that it’s worth thinking about whether or not these genetic technologies might have unintended negative consequences for humans.

Therefore, will exogenous mRNAs entering the human DNA actually cause harm to the human body? According to Dr. Lin, it depends on the site of insertion and whether or not the inserted gene can be expressed.

Another question is, in which type of cells does this gene embedding occur? If it occurs only in individual organs, then it will affect only the cells in these organs. However, if it occurs in an embryonic cell, it will affect the next generation.

In general, there is no more information to answer these questions. However, the Lund University study had at least one breakthrough. That is, it made people see clearly an exogenous viral gene sequence, mRNA, being inserted into the human chromosome.

“You can certainly say that it’s a type of genotoxicity,” said Dr. Lin. Is this type of toxicity insignificant and unimportant? Or will it affect bodily functions to some extent? All of this “needs to be confirmed by further experiment.”

Health 1+1
Follow
Health 1+1 is the most authoritative Chinese medical and health information platform overseas. Every Tuesday to Saturday from 9:00 am to 10:00 am EST on TV and online, the program covers the latest on the coronavirus, prevention, treatment, scientific research and policy, as well as cancer, chronic illness, emotional and spiritual health, immunity, health insurance, and other aspects to provide people with reliable and considerate care and help. Online: EpochTimes.com/Health TV: NTDTV.com/live