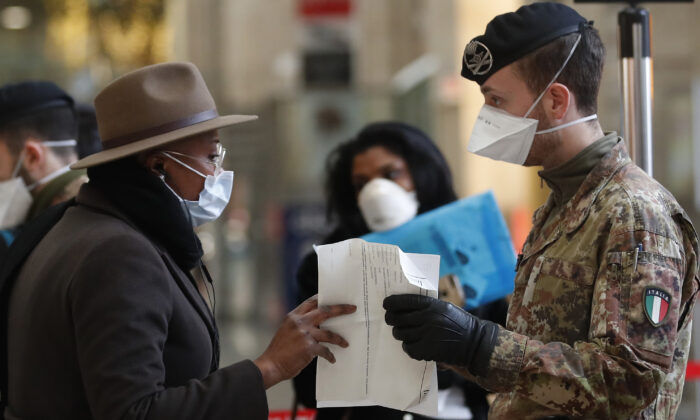 Italy to Lift Some Lockdown Measures on May 4, Prime Minister Says

Italy’s Prime Minister Giuseppe Conte said on Tuesday that his country expects to release a plan sometime this week for coming out of the COVID-19 lockdown, with some restrictions to be lifted on May 4.

Countries across Europe and beyond—joined in the United States by a cascade of states—have moved to gradually reopen amid warnings that acting too quickly, and without a sound plan, could enable the virus to resurge.

“Many citizens are tired and would like a significant relaxation of the measures or even their total abolition,” Conte wrote in a Facebook post, adding that lifting the lockdown completely can’t happen from one day to the next due to the risk of a rebound in infections.

The lockdown, closing most Italian businesses and preventing people leaving their homes for all but essential needs, has been in place since March 9, putting a major strain on the euro zone’s third-largest economy.

“I wish I could say: let’s reopen everything. Immediately. We start tomorrow morning. … But such a decision would be irresponsible. It would make the contagion curve go up in an uncontrolled way and would nullify all the efforts we have made so far,” Conte wrote.

“The easing of restrictions must take place on the basis of a well-structured and articulated plan. We need to reopen on the basis of a program that will consider all details and take into account all the data. A serious, scientific program,” he added.

After the government shuttered businesses not deemed essential to the supply chain on March 22, calls have recently been growing from industry lobbies to reopen some activities to prevent an economic catastrophe.

Italy’s Treasury expects the economy to contract by around 8 percent this year, two sources close to the matter told Reuters on Monday, underscoring the negative impact of the nationwide restrictions.

The Chinese Communist Party (CCP) virus, commonly known as the novel coronavirus, has spread aggressively across the world, with a Johns Hopkins tally on Tuesday showing the number of infections in Italy has hit 181,228, with a death toll of 24,114.

The number of new COVID-19 cases dropped to 2,256 on Monday, the lowest level in well over a month, the Civil Protection Agency said.

In Italy, 141 doctors have died on the frontlines of the outbreak, according to an Italian doctors’ association.

The editorial board of the Italian Association of Doctors (FNOMCeO) updated on April 21 its running tally of doctors who died amid response efforts to the pandemic.

“Unfortunately, the sad list of doctors who have fallen during the COVID-19 epidemic is growing,” FNOMCeO’s board wrote in a note accompanying the tally.

The association did not specify how the deaths of the 141 doctors could be attributed directly to COVID-19, noting that “many doctors die suddenly, even if the cause of death is not directly attributable to the virus, because there’s no buffer.”

According to an April 20 count (pdf) by the Italian Higher Health Institute (ISS), a total of 17,997 healthcare workers in Italy have contracted the virus.