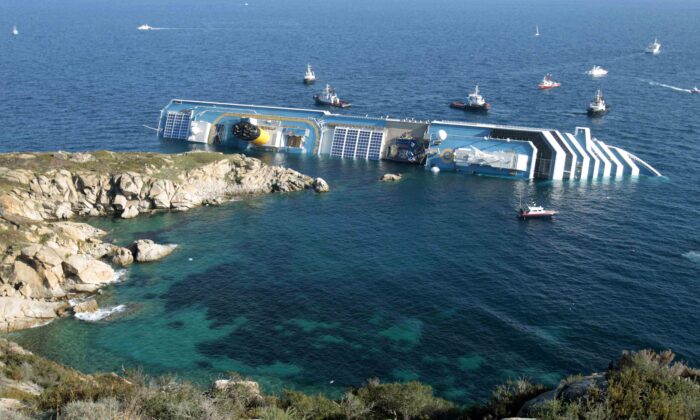 The luxury cruise ship Costa Concordia leans on its side after running aground in the tiny Tuscan island of Giglio, Italy, on Jan. 14, 2012. (Gregorio Borgia/AP Photo)
Europe

ROME—An Italian court has ordered Costa Crociere cruise line to pay 92,700 euros ($105,000) to a passenger who was aboard the Costa Concordia when it crashed and capsized off Tuscany in 2012, in one of the few civil lawsuits to have reached a verdict against the company.

The Genoa court recognized that passenger Ernesto Carusotti suffered post-traumatic stress as a result of the disaster, which killed 32 people, according to the Codacons consumer group which represented him.

Costa, which is part of the U.S.-based Carnival Corp., declined to comment Wednesday. In a statement to The Associated Press, Costa said it reserved the right to respond “through the most appropriate channels.”

Some 4,200 passengers and crew were aboard the Concordia when it slammed into a reef Jan. 13, 2012, off Tuscany’s Giglio island. The captain, Francesco Schettino, is serving a 16-year prison sentence after he was convicted of manslaughter, causing the shipwreck and abandoning the vessel. Prosecutors say Schettino intentionally brought the ship too close to shore in a stunt, and then abandoned the listing liner while passengers and crew were still aboard.

During Schettino’s trial, Costa told the Florence court it had paid out 84 million euros in compensation to passengers, crew and relatives of the 32 dead, according to Italian media reports at the time. But a small percentage of people refused the compensation package and pursued lawsuits.

According to Codacons, Genoa Judge Paolo Gibelli ruled that Costa Crociere was liable not only for the shipwreck itself but for the traumatic experience that Carusotti suffered. It ordered Costa pay Carusotti 77,000 euros in damages plus 15,692 euros in legal fees.

In a statement, Codacons said the award was a “very important victory” since it showed the “total incongruity” of Costa’s compensation package to most of the victims.

The capsized Concordia was eventual righted from the reef and then floated to the mainland where it was turned into scrap.