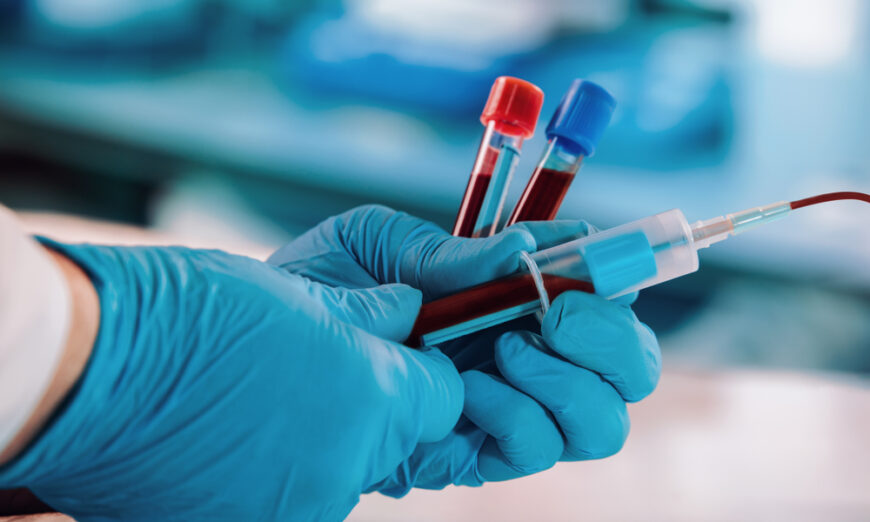 Physicians in Italy studied the blood of patients who had been injected with mRNA COVID-19 vaccines and found foreign matter long after vaccination, a new study shows.

The three doctors, all of whom are surgeons—Franco Giovannini, M.D., Riccardo Benzi Cipelli, M.D., and Giampaolo Pisano, M.D.—examined freshly drawn blood of more than a thousand patients using direct observation under microscopes to see what was happening in the blood.

Their results were published in the International Journal of Vaccine Theory, Practice, and Research in August 2022.

For this study, the Italian doctors used optical microscopy, that is, regular light microscopes, to examine the blood. Blood cells are easily visible under a microscope. Their shape, type, and how and if they are aggregated—clumped together—can help the skilled physician better understand the patient’s health.

In their 60-page peer-reviewed study, the Italian researchers reported case studies from their observations. Although they could not explain what they observed, they noted in the study that what they saw was so strange that they felt the need to alert the medical community.

The light or optical microscope uses visible light and a series of lenses to magnify small images.

This technique, which is called dark-field or dark-ground microscopy, works by blocking the backlighting and bouncing the light around from the side in order to make the slide stand out from the dark background. Dark-field microscopy uses a special aperture to focus the light so the background stays dark. The light will not pass directly through the sample, and no staining is required, so living cells do not need to be killed to be studied. For this research, the doctors used dark-field microscopy.

Of the 1006 patients, 426 were men and 580 were women. One hundred and forty-one received only one dose of an mRNA vaccine, 453 got two doses, and 412 received three doses in total. The patients ranged in age from 15 to 85. The average age of the patients was 49. All 1,006 patients were seeking healthcare because they were not feeling well: presenting with a wide variety of health issues.

On average, the patients whose blood was examined had been vaccinated about one month prior.

Of the 1,006 patients, after vaccination, only about 5 percent—just 58 people—had blood that looked normal.

The doctors were able to examine the blood of 12 of the patients before they had received any vaccines. At that time, previous to being vaccinated, all 12 patients presented with normal, healthy blood, according to the researchers.

Each of the patients was being reviewed for symptoms, a wide range of which had arisen since their vaccinations.

Foreign Material Aggregated in the Blood

This foreign material seemed to collect itself into structures, sometimes forming crystals and other times forming long tubes or fibers.

The foreign-body structures in the patients’ blood, which had not been there before vaccination, certainly look unusual in the photos included in the study.

The large shapes seemed to the doctors to have aggregated in the blood, and they observed shapes that suggest the way graphene can self-assemble into structures.

Graphene is a form of carbon that occurs when the atoms are arranged in hexagons, making a flat crystal, like a sheet. In this form, though the carbon is not a metal, it behaves chemically like a metallic compound.

The two shapes they noticed in the blood stream were crystal-like chunks and tube-like lengths. While the researchers could not confirm that what they saw was graphene, they pointed out that graphene can aggregate into shapes similar to those the doctors observed.

Graphene has been used in nasal-delivery flu vaccinations, and is being developed for use in other medicines. However, it is not listed as an ingredient in any of the mRNA vaccines.

The Italian doctors did not chemically test for graphene. They only speculated that graphene may be a component of the structures. Graphene can self-assemble tiny nano-structures, making it useful for carbon nanotubes and carbon fiber. However, as the authors mentioned, graphene self-assembling into structures in the bloodstream could provide something for blood to clot on, potentially causing large-scale blood clots.

These speculations raise more questions than answers, as neither graphene nor other metallic compounds were supposed to have been used in the vaccines. So why did over 950 people experiencing post-vaccination health issues present with foreign material in their blood?

This is not the only study to find blood abnormalities post-mRNA vaccination.

In a previously published study in the same journal, a Korean team also showed that mRNA-vaccinated blood contained metallic objects that should not have been there. The Korean scientists analyzed samples of centrifuged blood from eight people who had received mRNA COVID-19 vaccines against two people who did not receive any COVID-19 vaccines.

The team of three South Korean medical doctors, Young Mi Lee, Sunyoung Park, and Ki-Yeob Jeon, explained that: “The preponderance of evidence suggests that the foreign materials found in the COVID-19 vaccine recipients … were injected into their bodies when they received one or more doses of the COVID-19 vaccines.”

The Italian study, which analyzed over 10 times as many blood samples, appears to confirm the findings from Korea. However, it is difficult to extrapolate from their findings. It would be easier to confirm that the vaccines were indeed the cause of the blood abnormalities if the Italian researchers had also analyzed the blood of a control group of patients presenting with similar unusual symptoms (or lack thereof) who had not been previously vaccinated.

Clotting problems are one of the hallmark complications seen after COVID-19 vaccination.

As the subject pool was of people who had been recently vaccinated and subsequently had health problems arise, this new science suggests that these structures in the blood and the abnormal clotting behavior of the blood cells could be a major part of why clinical doctors are seeing so many unusual health issues consequent to mRNA vaccination.

Richard Hirschmann told 1819 News that he has collected pictures of over a hundred cases of these blood clots. Hirschmann also alerted local labs and has been working with a radiologist, Phillip Triantos, M.D., to better understand why and how patients are presenting with large-scale slow-forming blood clots.

Other doctors, including Ryan Cole, M.D., a dermatopathologist (which is a doctor who uses a microscope to examine samples of skin, hair, and nails to diagnose diseases) and founder of the Idaho-based company, Cole Diagnostics, have also seen large blood clots becoming an emerging phenomenon since widespread vaccination campaigns started, according to 1819 News.

It used to be common for medical doctors to have microscopes in their offices and to examine their patients’ blood (and other bodily fluids) themselves, according to Barron Lerner, M.D., author of “The Good Doctor: A Father, a Son, and the Evolution of Medical Ethics.”

While medical doctors today, with some exceptions, almost always send tests off to outside laboratories for analysis, Barron Lerner described how senior physicians used to feel it was their duty to teach their younger colleagues and medical students how to do testing themselves: Gram stains to test for bacterial infections, urine analysis under the microscope, and centrifuging blood to check for anemia and other issues.

Akin to medical doctors of past eras, the Italian team of doctors who published these new findings explained that they have looked at the blood of patients over their entire careers, including after every other sort of vaccination. But they have never seen foreign bodies of this sort before.

Post-market surveillance of medical devices, new medications, and vaccinations is of the utmost importance to ensure safety. These unusual and widespread findings of abnormalities in the blood post-mRNA vaccination should be of global concern. If 94 percent of patients with adverse health problems have occlusions in their blood that were not present before they were vaccinated, these scientists may have uncovered an unanticipated and dangerous side effect of mRNA vaccines.