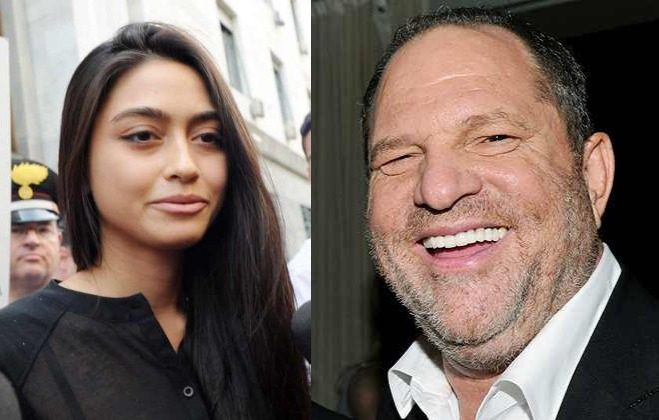 ITALIAN MODEL AMBRA BATTILANA isn’t backing down from her accusations against Hollywood movie mogul Harvey Weinstein.  She reportedly isn’t fazed by the power associated with the Weinstein name which can render any film industry wannabe careerless in a mere heartbeat.  In spite of this Battilana is reportedly ready to go to the mattresses.

In yet another sex scandal Battilana sued a 70-year-old wealthy business for sexual assault even though the business man asserts that their union was consensual even though she was under-aged at the time.  He (known in the media as “Mr. G”) reportedly showered Battilana with jewels and cars while she was a contestant in the Miss Italy pageant.

Battilana asserted that Weinstein invited her to his office last Friday in the Tribeca Film Center (owned by actor Robert Deniro) on Greenwich street in Manhattan, New York.   After refusing his advances Battilana claims that Weinstein groped at her breasts – asking if they were real and asking for a kiss.  He also slipped his hand up her skirt. Battilana was distressed over Weinstein’s conduct and she reportedly called a friend who took her to the Ninth Precinct where they were then directed to the First Precinct which is in the Tribeca neighborhood.

Weinstein, who is married with five children went to the precinct on Saturday and voluntarily underwent questioning. No charges have yet to be filed.  The Weinstein camp asserts that Battilana is a gold-digger with a history of going after older men.  They consider her assertions a case of blackmail and and Battilana’s lawyer Mark Jay Heller,  insists that such assertions are utterly untrue and a typical attempt to soil and villainize the victim. “In fact” Heller said, ” …. making such a false allegation adds insult to injury, causing a duplicity of victimization…. Regrettably, like many sex crimes victims, she is being inappropriate branded and persecuted for coming forward to report an act of sexual abuse perpetrated against her.”

“We are cooperating fully with the authorities, and are confident that we will be fully vindicated,” a Weinstein spokesman said in a statement. “We will have no further comment.”

Internet rumor sites have accused Weinstein of being thee most widespread abuser of “the casting couch”  but no woman has ever admitted to falling victim to it.