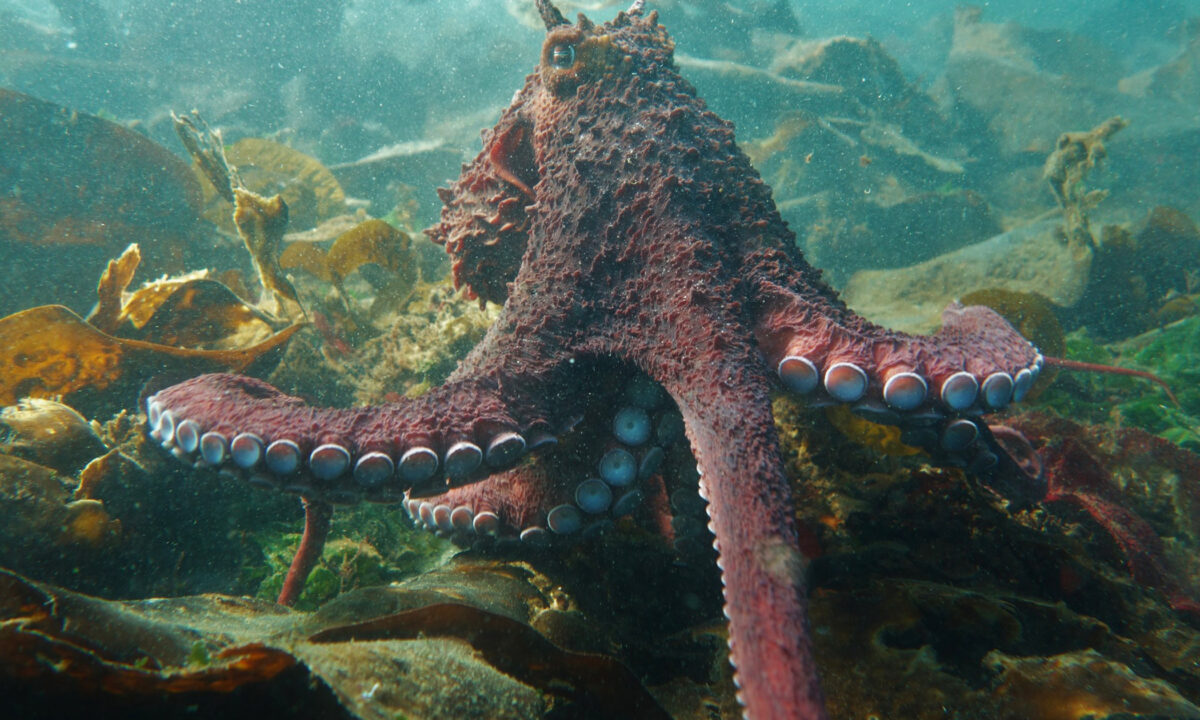 ‘It Was Incredible’: Diver Records 40-Minute Close Encounter With a Giant Pacific Octopus

Three minutes into a dive off the coast of Canada’s Campbell River in British Columbia, a diver and three of her friends had the encounter of a lifetime with a curious giant Pacific octopus. The incredible experience was caught on camera and has since gone viral.

Teacher Andrea Humphreys moved to Campbell River from North Delta in 2019. On Oct. 15, she headed to a well-known Campbell River dive site with three friends: Ester de Best, Alex Spicer, and another friend from the east coast of Canada.

Humphreys told The Epoch Times: “We entered the water with the intent of trying to find an octopus for the friend from the east coast. I am quite familiar with the dive site, and knew of a couple in their dens. However, unexpectedly, within three minutes of entering the water, there was the octopus sitting out in the open in a bed of kelp.”

Overcome with excitement, Humphreys flagged her friends over so that they could see it and take pictures and videos. As they did, the curious critter swam toward one diver and started climbing onto his body.

“After a couple minutes it climbed down, and then I moved in to take a couple of pictures. It came over to me and started crawling on my camera and all over me!” Humphreys said. “It was incredible; you can hear my excitement and amazement in the video, as I was talking and squealing into my regulator.”

Having never seen the underside of a Giant Pacific octopus at such close quarters, Humphreys was surprised by how “small and close” its suckers were, adding, “the texture of its skin always amazes!”

Humphreys shared that she felt briefly nervous when the octopus crawled over her hand onto her face but knew her friends were close enough to help if the creature removed the mask off her face or the regulator from her mouth. As divers are not allowed to approach and engage with wildlife, the group of four friends made sure it was the octopus’s choice to interact throughout the encounter.

Humphreys said: “I’ve had an octopus crawl on my hand and briefly touch my camera before, but nothing like this. This octopus was just so curious and inquisitive … my friends that were with me were just as speechless as I was after the experience!”

After an incredible 40 minutes, the divers retreated, leaving the octopus still swimming in the open water.

An amateur underwater photographer, Humphreys usually only shares her footage with family and friends on Facebook but she knew the Oct. 15 dive was a special one.

Encouraged by others, she shared footage of the “feel-good moment” with the news for people to enjoy but had no idea that it would go viral.

“I shared it because I have a passion for diving and educating people on the stunning beauty that lives right beneath the surface of our oceans … people have been thrilled to have a brief glance into the marine world!” she told The Epoch Times.

An advanced diver who has had over 675 dives in her 12-plus years of experience, Humphreys loves the excitement and novelty of observing different species but worries that there is more plastic pollution in our oceans than ever before. As a diver, she sees the direct impact this pollution has on marine life and hopes people can “continue making a change to help keep our oceans healthy and thriving.”

Humphreys shared her other pictures and videos of marine life on Instagram.