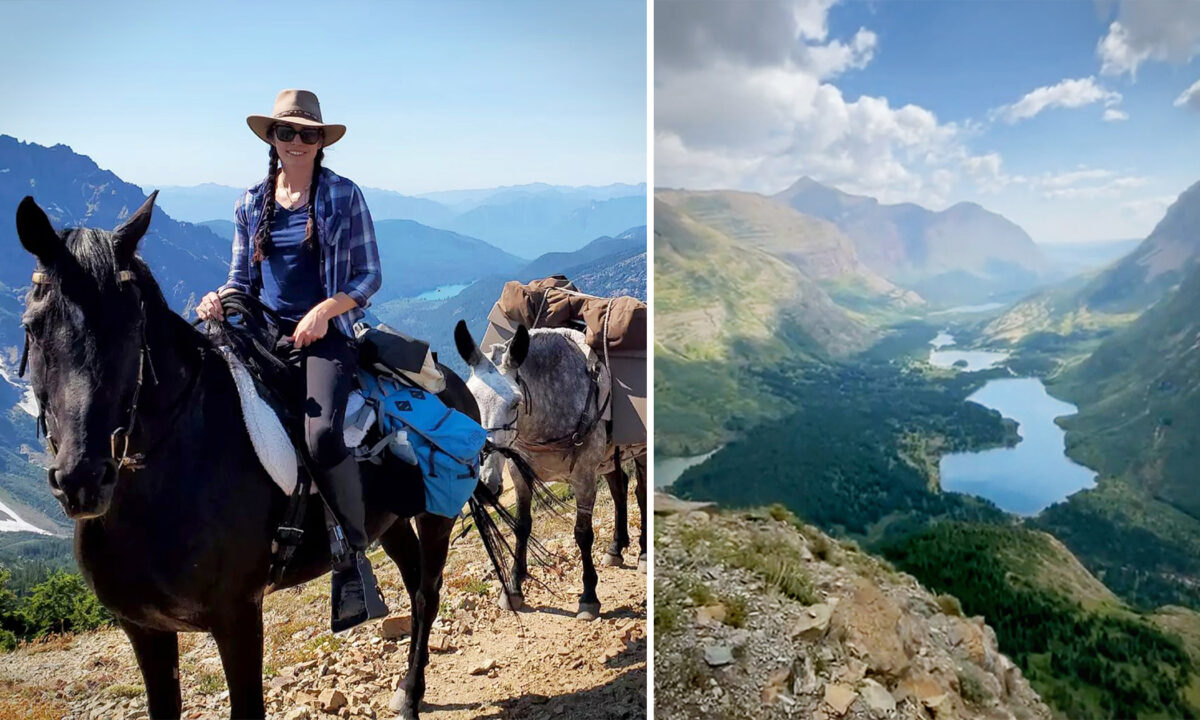 As others of her generation busy themselves with celebrity, Instagram likes, and materialism, not so for Gillian Larson. As her peers snap selfies in trendy bistros and bars, trying to go viral, the 30-year-old horse enthusiast gazes out over vistas sublime and beautiful.

The avid equestrian has been “thru-riding”—marching the full length of a trail within a season—for close to a decade.

“One of the most powerful impacts of thru-riding is the way it changes one’s perspective about what is valuable and meaningful,” Larson told The Epoch Times.

“When you are on a journey like that, everything becomes focused on the present moment—on accomplishing the day’s miles, on finding a place to camp, on getting food and water for the horses, then wrapping up in a sleeping bag under the stars.”

When on such excursions, nothing else matters besides the necessities of life, she adds. Larson finds tremendous satisfaction in each day’s successful completion, “when you and the horses are camped safe for the night.”

Each day brings a sense of affirmation that is tangible and true.

“It keeps you grounded and makes life very simple and pure and real,” she added. “Everything outside of those immediate elements feels trivial and unimportant.

“I’m not thinking about social media posts, or politics, or the next fashion trend, but about climbing a hill, or sawing through a tree, or finding a clear running stream.”

Hearing her stories, one can almost hear the trickling streams, smell the pine trees, and feel the freshness of the outback air. It’s easy to see how such down-to-earth living could grow on Larson—while providing a livelihood as well.

Larson has always followed the path less traveled. Her mom, a keen horsewoman, who rode even while carrying her daughter, focused on competitive dressage, while Larson, who got her first pony at age 7, had a wilder streak; growing up in Topanga, just outside Los Angeles, exploring trails, riding on beaches, and camping were more her thing.

A simple conversation was all it took to awaken the SoCal native to the element of discovery that would become her life’s passion. After graduating from Cal Poly with a bachelor’s in biology, Larson opted for a trip, planning to graduate in the fall.

“I thought I had time for one adventure in the interval” she said. “My mother and I had been hiking in the Sierra the previous summer and she mentioned hearing about a woman who had set a speed record for hiking a trail from Mexico to Canada; she was comparing the way that woman hiked 40 or 50 miles a day, and we were struggling to do the 11 miles to the high Sierra camp where we were going to stay, but all I heard was ‘trail from Mexico to Canada.’”

For Larson, that was it. She hadn’t ever heard of such a thing, but once she did, she was all in.

At age 22, she rode the Pacific Crest Trail (PCT ) from the border of Mexico to Manning Park in British Columbia, Canada, making her possibly the youngest person to ever complete the trail solo.

The journey took months, after which Larson found herself immediately whisked into grad school—yet parts of the sojourn she’d had to skip. Within driving distance of California State University, Northridge, where she was studying, she completed these sections mid-semester.

“I had been very naïve about the timeline needed to complete the trail,” she admitted, “the way I would be delayed by lingering snowpack in the higher elevations … and almost all of the trail is at a high elevation!”

Every single day of the trail was a challenge. Larson constantly had to strategize.

“There are always things that prevent one from being on trail, whether it is closures due to fire, blockages from snow pack, time spent traveling to get to a new trailhead, the need to rest the horses, the difficulty of getting food to resupply the horses on trail, visits to farriers and vets for care, vehicle breakdowns, etc.,” she explained.

The biggest obstacle, though, was undoubtedly the snow, which presented itself within 200 miles of the start, as the trail crossed beneath Mt. San Jacinto.

“I was completely unprepared to understand it, since I had lived all my life in southern California and never dealt with snow before,” she said. “I had no idea about how long it took for the snow to melt in the Sierra or in Oregon and Washington.”

Larson calculated that it would take about 100 riding days to finish the 2,650-mile march. The clock was ticking down to the start of class, and instead of taking time to wait out snowpack, she skipped sections, carrying on to reach the Canadian border. Then, as a student, she opted to backtrack into the Sierras on weekends to complete the missed trails.

When finally she finished the whole trail, on Labor Day weekend in 2014, she was elated but exhausted. The trek had not only been physically straining, but also a burden emotionally, as Larson felt she had put her horses through unnecessarily difficult situations as a result of poor foresight.

“I had so much respect for my horses for getting me through all the terrible moments and for trusting me and giving me all their effort,” she said. “I felt I had let them down by not being able to give them better conditions for the work they had to do.”

The bonds she formed with her steeds, Shyla and her foal, Takoda, whom Larson mainly used as a pack animal, were visceral. Sadly, Larson lost her beloved Shyla to a sudden heart attack in 2019—but not before they had several more adventures together.

In 2016, Larson set off to complete the PCT again, with the same two horses—this time “a much more successful and profoundly gratifying experience,” she said.

After which, she and Shyla rode shorter trails through: Arizona and Colorado; the Continental Divide Trail from Mexico to Canada; and a route she herself created across Utah, starting on the south side of the Grand Canyon, crossing into Utah, and then continuing to the Wyoming border. In total, they traversed nine different states, trekking over 10,000 miles.

Larson has since completed other exciting excursions on other horses, including a wonderfully memorable trip through the Grand Canyon with her mother, whom she credits as “a steadfast supporter along all of my thru-rides, helping to meet me at re-supply points and driving to Canada to pick me up at the end of rides, and many countless other selfless acts to allow me to follow my dreams.”

But Larson has yet to forge a bond with another horse like the one she had with Shyla.

“She was strong, and fast, and courageous, and beautiful,” said Larson. “When I first got her, she was aloof and independent, but over the years we both came to rely on each other, and when we were on trails in the backcountry alone together, we were true partners.

“None of what I accomplished could have been possible without her spirit, her energy, her courage, and her trust.”

Atop her adoring mare, Larson has seen some of the most memorable, pristine sights in America. One day, they were traversing the Goat Rocks Wilderness in the Cascades mountain range, in southern Washington state; it was towards the end of their second PCT ride, and the day was gloomy and overcast; reaching a particularly dramatic section of trail called Knife’s Edge, where the hike crosses the spine of a mountain ridge, she saw something unforgettable.

“All the sudden, the cloud cover dropped and we rose up into a brilliant blue sky, with a clear view all the way to snowcapped Mt. Rainer ahead and Mt. Adams behind,” she shared. “It was absolutely glorious, and it matched my mood of admiration and gratitude for the sure-footed skill of my horse in navigating the treacherous terrain.

“I thrilled to the sheer beauty of the scene, with the clouds rolling beneath us like waves and the late afternoon sun touching everything with a golden glow. It is one of my all-time favorite moments from any of my rides … just a feeling of pure joy.”

Yet, thru-riding takes tremendous physical and mental fortitude, riding for 10 to 12 hours a day for days on end, alone in the wild, caring for animals.

“Yes, they are often carrying me on the trail, although the reality is that I walk a lot every day—5 or 10 miles at least—so I am not just a passenger,” she said.

“A very important principle of thru-riding for me is to always put the welfare of my horses as a top priority, which means making sure they are comfortable and well-fed and rested when we are in camp and that they receive special shoeing and hoof care to keep their feet strong and healthy.”

Moments like what Larson described make it more than worth it, she says—as do the transformative experiences horse packing through backcountries bequeaths.

“It changed the way I saw the world and what was important,” she added. “Riding a difficult, remote trail, where life goes by at three miles an hour, where each day has a clear goal of getting safely to the next campsite, where simple things like water, food, a warm meal and a warm bed take on a new importance, where the physical and emotional bond between you and your horse becomes your strongest connection to another living creature—all this changes the way you see the world, and the way you see yourself.”