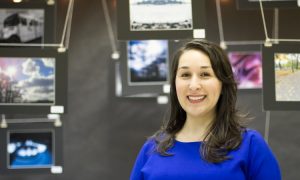 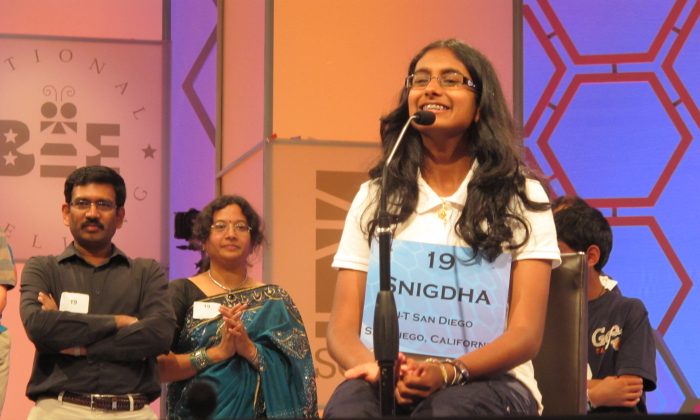 Snigdha Nandipati, 14, of San Diego, California, speaks to reporters on May 30, 2012—with her parents in the background—after winning the 85th Scripps National Spelling Bee. She spelled “guetapens,” correctly, a word that means ambush, snare, or trap. Now the Spelling Bee includes vocabulary questions in the preliminary and semifinal rounds. (Robert MacPherson/AFP/GettyImages)
US

Spellers now need to know vocabulary, such as what it means to eradicate something
By Zachary Stieber
biggersmaller
Print

Know what the words mean, not just how they’re spelled.

That’s the message to youth as the Scripps National Spelling Bee will include vocabulary knowledge as of this year.

Paige Kimble, director of the competition, said it’s a significant but natural change.

“It represents a deepening of the Bee’s commitment to its purpose: to help students improve their spelling, increase their vocabularies, learn concepts and develop correct English usage that will help them all their lives,” Kimble said in a statement.

A computer test has been used since 2002 as part of the criteria to determine which spellers advance to the semifinals. This year, qualifying for both the semifinals and the finals will be based on a score that includes onstage spelling, the computer spelling questions, and computer vocabulary questions. The vocabulary portion will count for 50 percent of the overall score.

“Spelling and vocabulary are, in essence, two sides of the same coin,” said Kimble. “As a child studies the spelling of a word and its etymology, he will discover its meaning. As a child learns the meaning of a word, it becomes easier to spell. And all of this enhances the child’s knowledge of the English language.”

Although local competition winners have been decided, the timing of the announcement lets all the winners prepare for the national competition, which will take place from May 28 through May 30 at the Gaylord National Resort and Convention Center in Oxon Hill, Md.

Several other changes are being made to the competition—spellers who misspell words in either round two or three of the preliminary rounds will now be eliminated immediately, and the computer-based tests will be part of the semifinals, not just the preliminaries as in past years.

One parent said he’s surprised by how significant the changes are.

“Changes are not a surprise, but these changes are massive,” said Mirle Shivashankar, whose daughter, 11-year-old Vanya, is among the favorites after finishing tied for 10th last year. “It came as a shocker.”

“I’m on an email group and we talk about spelling, and a lot of the returning spellers were really, like, shocked, and they were surprised about the change that’s happened,” Vanya Shivashankar said. “But it’s going to be really cool and fun to see how the bee will be because it will be spelling and vocabulary.”

What is the purpose of defibrillation?
a) removing fibrous matter from vegetables
b) removing bodily hair
c) restoring the rhythm of the heart
d) reducing a fever using medication

Something described as corrigible is:
a) correctable
b) rigid
c) unmanageable
d) filled with air

Nomenclature has to do with:
a) religious ceremonies
b) names
c) bones
d) folk superstitions

The correct answers are c, a, and b. See a full listing of sample questions here (pdf).