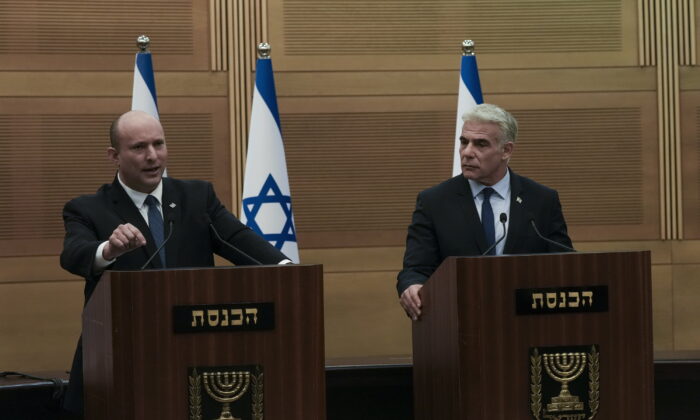 The Israeli Parliament voted to dissolve itself on Thursday, triggering new elections to be held in November and marking the country’s fifth election in three-and-a-half years.

The unlikely coalition, which saw eight parties from the left, center, and right united in their goal to keep then-Israeli Prime Minister Benjamin Netanyahu out of power, had in recent weeks been plagued by internal politics and members quitting, in turn making it harder to pass legislation.

He will stand down at midnight and his coalition partner and former defense minister, Yair Lapid, will step in as interim prime minister and lead a caretaker government on Nov. 1, when new elections will be held.

The dissolving of the country’s Parliament, also known as the Knesset, comes as economic and regional security problems continue to mount in the nation, prompting political instability.

It also paves the way for former Prime Minister Benjamin Netanyahu, who is currently on trial for corruption, to return to power.

Netanyahu has denied any wrongdoing.

Recent polling shows his Likud party is on track to win the most number of seats in the next Parliament. However, his right-wing bloc is still unlikely to get the 61 seats needed to form a ruling government, Axios reported.

Speaking of the coalition, Netanyahu told Parliament ahead of Thursday’s vote, “They promised change, they spoke of healing, they carried out an experiment—and the experiment failed.”

“That’s what happens when you take a fake-right along with a radical left, and mix it up with the Muslim Brotherhood and [Arab-led party] Joint List,” Netanyahu said.

Meanwhile, Bennett, who together with Lapid formed the “government of change” which toppled Netanyahu in June 2021 after more than 12 years in power, has said he will not be running in the upcoming election.

The outgoing prime minister said it was “time to step back a little” and “look at things from the outside.”

Bennett and Lapid, meanwhile, said in a statement earlier this week that they had done “everything we could to save this government,” noting that moving to dissolve the Knesset was “not an easy moment but we took the right decision.”

“We didn’t leave any rock unturned,” the outgoing prime minister said. “Last Friday, I understood that when the settlements law expires there will be chaos. We couldn’t let that happen. Therefore we decided to go for election in order to prevent that.”

The dissolving of the Israeli Parliament comes just weeks before President Joe Biden is set to visit the country, while the United States has vowed to support Israel despite the nation heading toward its fifth round of elections.