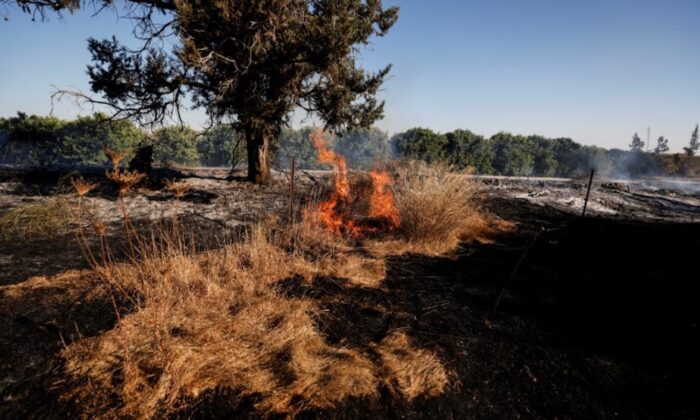 A field is on fire after Palestinians in Gaza sent incendiary balloons over the border between Gaza and Israel, Near Nir Am, on June 15, 2021. (Amir Cohen/Reuters)
Middle East

Attacks were in response to incendiary balloons launched from Gaza Strip, the IDF said
By Mimi Nguyen Ly

The Israeli Defense Forces confirmed in the early hours of June 16 that its aircraft attacked armed compounds belonging to Hamas in the Gaza Strip. The attacks were in response to the launching of incendiary balloons from Gaza on June 15 that sparked fires in fields in southern Israel.

The Israeli fire brigade reported that at least 20 fires were started by the explosive-laden arson balloons.

In a statement, the military said the aircraft attacked Hamas compounds in both Gaza City and the southern town of Khan Younis. The Israel Defense Forces (IDF) added that it was “ready for all scenarios, including renewed fighting in the face of continued terrorist acts emanating from Gaza.”

A Hamas spokesman, confirming the Israeli attacks, said it would continue to pursue its “brave resistance and defend their [Palestinians’] rights and sacred sites” in Jerusalem.

It comes after dozens of Palestinians clashed with the IDF near the Old City’s Damascus Gate along the Gaza border on June 15, as thousands of people participated in an Israeli nationalist march in East Jerusalem.

According to Israeli news outlet Haaretz, the Islamic Jihad terrorist group called on Palestinians in Israel and the West Bank to gather along the route of the planned Jerusalem flag march to “protect the Al-Aqsa Mosque”—a compound revered by Jews as the Temple Mount and by Muslims as the Noble Sanctuary.

The planned Jewish nationalist march was originally scheduled for May 10 as part of annual Jerusalem Day festivities that commemorate the reunification of Jerusalem and Israel’s control over the Old City in East Jerusalem in the aftermath of the Six-Day War in June 1967. In a recent statement, the IDF said that during the Six-Day War, 54 years ago, it had “successfully defended the State of Israel against enemy countries on three different fronts, in just six days.”

The march on June 15 began at the Damascus Gate of Jerusalem’s Old City and moved to Judaism’s holy Western Wall.

The Times of Israel reported that Hamas had threatened to renew rocket fire to Israel if the march went ahead. Prior to the June 15 march, Israel prepared its deployment of the Iron Dome anti-missile system in anticipation of possible rocket attacks from Gaza, reported Reuters. But there was no sign of rocket fire as the march dispersed after nightfall in Jerusalem.

The latest conflict marks the first exchange of fire between Israel and Gaza terrorists since a ceasefire brokered by Egypt ended 11 days of cross-border fighting that began on May 10. It’s also the first flare-up since the Israeli parliament approved a new government.

At least 12 people died in Israel as a result of the fighting last month, when repeated rocket attacks from Hamas and other terrorist groups in Gaza sent residents in Israel rushing into underground shelters. The IDF said that its Iron Dome air defense system was able to intercept about 90 percent of the rocket attacks from Gaza.

At least 230 people were killed in Gaza. Of the approximately 4,000 rockets that were fired from the Gaza Strip toward Israel, about 600 misfired and fell inside Gaza, according to the IDF. Some of the misfired rockets potentially killed and injured Palestinians.

Israel and Hamas have waged multiple conflicts since the terrorist group took control of Gaza in 2007. Israeli airstrikes in retaliation to rockets fired from Gaza aren’t rare.