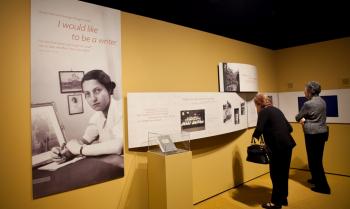 NEW YORK—Known as the Israeli Joan of Arc, Hannah Senesh carried out a secret mission behind enemy lines in WWII when she was captured and killed. For the first time in the United States, Senesh’s life is on display at an exhibit at the Museum of Jewish Heritage that opened on Wednesday.

The exhibit “Fire in My Heart: The Story of Hannah Senesh ” offers a spectacular montage of varied media, with audio, video, and personal artifacts, many of which had never been seen by the public before, as well as extracts from Senesh’s diaries, poetry, and still photos.

The daughter of a famous Hungarian journalist and playwright, she distinguished herself as a poet and diarist early in her teens. Faced with institutionalized anti-Semitism while in a Calvinist school in Hungary, she managed to flee to Palestine where she attended the Agricultural School for Young Women in Nahal.

Even though she had grown up in a comfortable, upper-class environment in Hungary, she decided to live on a Jewish commune, known as kibbutz. Still, shortly thereafter she sought an even more meaningful contribution to the Jewish cause and finally chose to enlist with the British army to help save others from the Nazis.

Participating in a secret mission behind enemy lines, she was taken prisoner in occupied Hungary and executed at the age of 23. Her dedication and courage became an inspiration for the fledgling Jewish community in Palestine and she is also known as the Israeli Joan of Arc.

The Museum of Jewish Heritage is Located at 36 Battery Place in Lower Manhattan.

General Admission: $12 adults. Children 12 and younger are admitted free. Fire in My Heart: The Story of Hannah Senesh is on view through August 7, 2011.