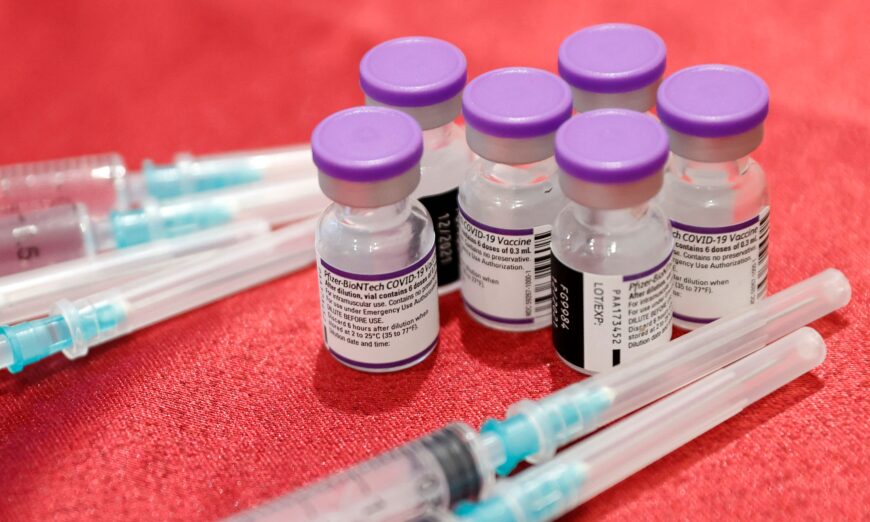 Syringes and vials of the Pfizer-BioNTech COVID-19 vaccine in Netanya, Israel, on Jan. 5, 2022. (Jack Guez/AFP via Getty Images)

Israeli researchers have found some side effects that occurred after COVID-19 vaccination were caused by Pfizer’s vaccine, according to a leaked video.

The Israeli Ministry of Health (MOH) commissioned researchers to analyze adverse event reports submitted by Israelis and the researchers presented findings from the new surveillance system in an internal June meeting, video footage of which was obtained by an Israeli journalist.

The phenomenon of rechallenge—when adverse events reoccur or worsen following additional vaccine doses—proved that some of the events were caused by the vaccine, researchers said.

A positive rechallenge was reported in 10 percent of the women who complained of menstrual issues, according to the researchers, who also identified cases of rechallenge for other adverse events.

Rechallenge changes a causal link “from possible to definitive,” Dr. Mati Berkovitch, head of the research team and a pediatric specialist, said at the meeting.

Rechallenge “helps us to establish the causal relationship,” added Sasha Zhurat, the main presenter at the meeting. The advantage of the surveillance system and the analysis “is not only to identify the symptoms but also to link them to the vaccine,” she said.

Footage of the meeting was leaked to Yaffa Shir-Raz, a health journalist and a risk communication researcher, who publicly released clips from the meeting. The Epoch Times reviewed footage of the entire meeting and had key portions translated independently for this story.

About two months after the meeting, the MOH published a public report on the results of the data analysis. Language in the report on causality differed from that used during the meeting.

“The report presents all the cases that were reported in close proximity to the receipt of the coronavirus vaccine, and does not necessarily indicate a causal relationship between receiving the vaccine and the reported phenomenon,” the MOH said in the report.

MOH spokespersons didn’t return or declined to answer questions on the discrepancy. Instead, a spokesperson sent a press release dated Sept. 19, 2021, that announced the “establishment of a dedicated information headquarters for the fight against the coronavirus.”

“I’m no longer part of the project,” she told The Epoch Times via Facebook Messenger. “Unfortunately, I cannot address your questions. Please reffer [sic] your queries to the MOH.”

A request for comment to Dr. Emilia Anis, director of the MOH Division of Epidemiology and a meeting attendee, was returned by the MOH, which declined to answer the questions asked of Anis.

Rechallenge in pharmacovigilance is one of the factors to determine causality and refers to the re-administration of the same vaccine or drug after the adverse event goes away to examine whether the same event occurs again.

Dr. Robert Malone, who helped develop the messenger RNA (mRNA) technology on which Pfizer’s vaccine is built, told The Epoch Times that rechallenge is a “standard pharmaceutical clinical trial practice” that can provide definitive proof of causality.

“The reports of rechallenge in the Israeli study do not prove causality,” according to Malone. Only a formal rechallenge trial would, he said. The analysis, though, “strongly suggests and supports causality.”

Dr. Harvey Risch, a professor emeritus of epidemiology at the Yale School of Public Health, told The Epoch Times via email that the researchers “are essentially correct” in their conclusions that the vaccines caused the adverse events.

Researchers in other countries have said before that there are causal links between certain vaccines and certain side effects.

“The current evidence supports a causal association between mRNA COVID-19 vaccination and myocarditis and pericarditis,” Dr. Tom Shimabukuro, a health researcher with the U.S. Centers for Disease Control and Prevention (CDC), said during a meeting over the summer.

Most side effects following COVID-19 vaccination tend to be mild and typically last only a few days, according to the CDC. Other post-vaccination conditions are described as adverse events.

Side effects are health issues that have been proven to be caused by a vaccine, while an adverse event is a medical condition that may or may not be related to the vaccine.

The CDC’s Immunization Safety Office declined to comment on the Israeli findings.

“CDC continues to monitor the safety of COVID-19 vaccines and makes information available to the public in a timely and transparent manner,” the office told The Epoch Times via email.

Pfizer and Moderna haven’t responded to requests for comment.

Israel has primarily administered Pfizer’s vaccine, due to a unique agreement (pdf) with the U.S.-based pharmaceutical company. Israel quickly received Pfizer doses, while, in return, the country allowed company executives to access some national health data.

Other Findings Not Made Public

The data presented in June was collected from December 2021 to May.

The surveillance system received a total of 8,000 reports, of which 1,741 were removed for providing incomplete or duplicate information.

A total of 29 categories of adverse events were identified, 22 of them from the blank space option on the questionnaire. However, only data for the first five categories with the most reports were analyzed: neurological (395 reports), general side effects (295), menstrual disorder (282), musculoskeletal disorders (279), and the digestive, kidney, and urinary system (192).

Many of the reported adverse events were found to be long lasting, which researchers said in the meeting was surprising since the brochure handed to vaccine recipients says otherwise. They also said Pfizer officials told them that the company didn’t know of any long-lasting symptoms.

Researchers also said they identified new adverse events not listed in the brochure, including back pain.

In the official report later issued to the public, the MOH didn’t detail how researchers were caught off guard by the duration of the events and side effects. The health agency also stated that there were no new events identified.

“In conclusion, the reported phenomena are known phenomena in the professional literature and were also found in the previous reports of the Ministry of Health, and there was no observation of an increase in a new phenomenon (new signal),” the MOH wrote.

Shir-Raz, the journalist who broke the story about the internal meeting, said the delay in reporting the results included not sharing the data with the MOH expert panel that convened near the end of June to decide whether to recommend Pfizer’s vaccine for children aged 6 months to 5 years.

“We have the protocol of this meeting, so we know it specifies which documents were presented to them when they made their decision, and there was no mention of this study in the protocol,” Shir-Raz told The Epoch Times, citing a MOH document (pdf) she obtained. “So they hid it even from their own experts.”

Shir-Raz, who was fired from her job last year for writing articles critical of the MOH’s handling of the lockdown and COVID-19 death statistics, said that breaking the story was about “getting the truth out.”

“For the past two months, I’ve been dedicating myself almost entirely to this story only … It’s not just another issue for me, it’s not another article,” she said. “For me, it’s getting the truth out. Because it’s not just local. … It has international implications.”

Israel has often been the first country to report on vaccine safety and effectiveness. Its data has regularly been cited by U.S. agencies, including the CDC.

Dr. Sharon Alroy-Preis, an Israeli official who has said she’s in charge of vaccine safety monitoring, has presented data four times to the CDC and the U.S. Food and Drug Administration since September 2021, most recently in April.

Retsef Levi, professor of operations management at the Massachusetts Institute of Technology, said during one of the meetings that the MOH’s surveillance system was “truly dysfunctional” and “does not address appropriately major concerning safety signals.”

“It’s our data, I’m in charge of it, so I know exactly what is being reported to us,” she told U.S. officials.

But the system in place through most of 2021 was later replaced, with Israeli officials acknowledging that it wasn’t adequate.

Under the old system, reports could be submitted anonymously to the ministry’s website. Reports couldn’t be verified, making it impossible to conduct reliable analyses of the data, according to the MOH.

“As time passed, it became clear that the manner of reporting on the ministry’s website, which is an anonymous report in free text, made it difficult to check the reliability of the data and their meaning, their professional analysis and drawing conclusions,” the MOH wrote in its August report.

It wasn’t until October 2021, though, that the ministry began creating “an identified questionnaire” with predefined conditions and a field to add more details of the adverse reactions, including other conditions not listed on the questionnaire that would be used in the analysis by Berkowitz and his team. The new system requires people to input their identities and other information along with details of the adverse event.

“There is identification of the patient. This is not an anonymous report,” Zhurat said during the meeting.

The choice to omit some of the crucial findings discussed in the meeting from the public report is “a recipe to destroy” the entire vaccine program, according to Levi, an Israeli native and an expert in risk management.

“The more pro-vaccine, the more disturbed you need to be from something like this,” Levi told The Epoch Times. “And the reason is that the two most important enablers for vaccine programs … to be successful is trust and transparency, that you actually communicate to people the real risk-benefits and allow them to make choices about what they want to do. The second thing is that you take care of the people that were harmed by the vaccine because no vaccine has 100 percent safety.

“I think we have in this example … where we violate these two very important principles. This is a recipe to basically destroy all vaccine programs.”

Meiling Lee
Meiling Lee is a health reporter for The Epoch Times. Contact her by emailing meiling.lee@epochtimes.nyc