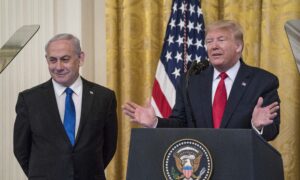 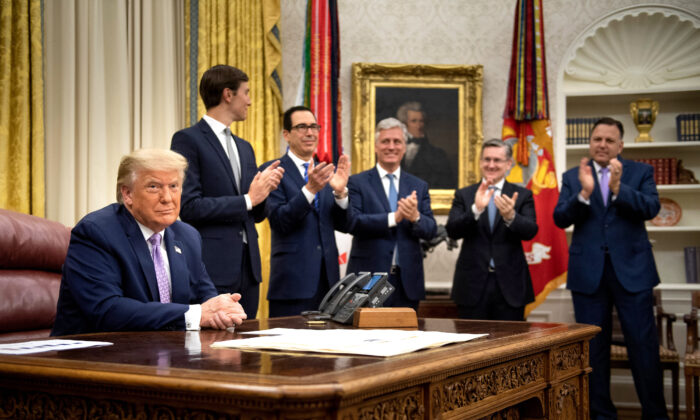 Israel and the United Arab Emirates (UAE) agreed on Thursday to the full normalization of relations in a deal brokered by U.S. President Donald Trump.

“Today, we usher in a new era of peace between Israel and the Arab world,” Israeli Prime Minister Benjamin Netanyahu said at a press conference in Jerusalem.

Netanyahu, Trump, and two UAE leaders spoke and made the agreement, according to a joint statement from the United States and the two Middle Eastern nations.

“This historic diplomatic breakthrough will advance peace in the Middle East region and is a testament to the bold diplomacy and vision of the three leaders and the courage of the United Arab Emirates and Israel to chart a new path that will unlock the great potential in the region,” the statement said.

The two countries will immediately cooperate on the development of a vaccine for the CCP (Chinese Communist Party) virus, which causes the COVID-19 disease.

They will also open mutual embassies.

Trump, a Republican, told reporters at the White House: “This is a truly historic moment. Not since the Israel-Jordan peace treaty was signed, more then 25 years ago, has so much progress been made towards peace in the Middle East.”

The agreement with the UAE comes after treaties with Jordan and Egypt decades ago, Israeli’s prime minister said.

“I believe there’s a good chance we will soon see more Arab countries joining this expanding circle of peace,” he told reporters.

The joint statement said the opening of direct ties between Israel and the UAW “will transform the region by spurring economic growth, enhancing technological innovation, and forging closer people-to-people relations.”

Per a request from Trump, Israel is suspending declaring sovereignty over certain areas, including the West Bank, and is focused on expanding ties to other countries in the Arab and Muslim world.

Under Trump’s Vision for Peace, Muslim worshipers are allowed to pray at Al-Aqsa Mosque in Jerusalem, and other holy sites in the city should remain open for peaceful worshipers of all faiths.

Netanyahu and UAE Crown Prince Sheikh Mohammed bin Zayed Al Nahyan expressed their deep appreciation to Trump “for his dedication to peace in the region and to the pragmatic and unique approach he has taken to achieve it,” the joint statement said.

U.S. national security adviser Robert O’Brien said in Washington that Trump “is going be known in history as one of the changemakers, and one of the remarkable leaders in the Middle East.” He said Trump should be nominated for the Nobel Prize.

Trump unveiled his vision in January. It was aimed at resolving the Israeli-Palestinian conflict, but the 80-page plan also dealt with other matters.

“This is an unprecedented and highly significant development,” he said at a White House event with Netanyahu unveiling the plan.

“In the past, even the most well-intentioned plans were light on factual details and heavy on conceptual frameworks. My vision presents a win-win opportunity for both sides, a realistic two-state solution that resolves the risk of Palestinian statehood to Israel’s security,” said Trump.