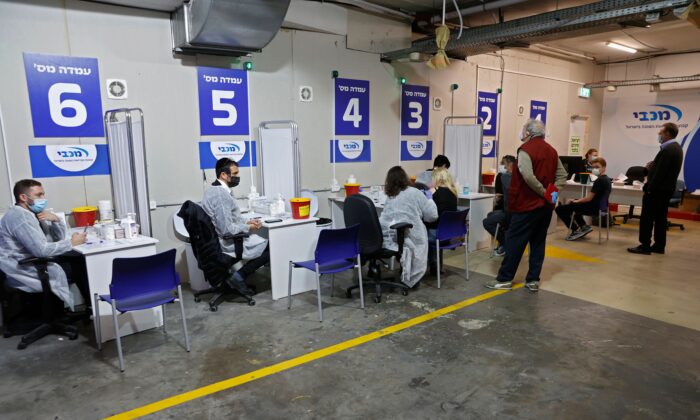 Health workers of the Maccabi Health vaccination centre administer doses of the Pfizer-BioNtech COVID-19 vaccine inside the parking lot of the Givatayim mall in Israel's Mediterranean coastal city of Tel Aviv on Jan. 26, 2021. (Jack Guez/AFP via Getty Images)
Vaccines & Safety

New statistics from Israel’s Health Ministry, released Thursday, indicated that the vaccine jointly developed by Pfizer and BioNTech provided 88 percent protection against hospitalization and 91.4 percent against severe illness, while being just 39 percent effective against the Delta strain, Bloomberg reported.

The figures are based on a review of an unspecified number of cases logged between June 20 and July 17, according to Israeli news channel i24 News. The outlet reported that the Health Ministry report also indicated waning effectiveness of the vaccine over time, with just 16 percent effectiveness in preventing COVID-19 transmission among those who received the vaccine in January. Effectiveness rose to 44 percent for those who got the shot in February, 67 percent for March, and 75 percent for April.

Still, even for those who received the vaccine in January, its effectiveness at preventing severe illness stood at 86 percent, a level similar to that for people who got the shot more recently, i24 reports.

Doctors cited by The Times of Israel said that the picture of fading immunity may partly reflect a bias where those who got the shot early were often those with underlying health conditions and more susceptible to infection.

Epidemiologist Nadav Davidovitch, a Ben-Gurion University professor and leader of Israel’s doctors’ union, told The Times of Israel in response to the Health Ministry’s new statistics that “What we see is that the vaccine is less effective in preventing transmission, but it’s easy to overlook that it’s still very effective in preventing hospitalization and severe cases.”

The new report is likely to spark debate about the purposefulness of offering a third, booster shot, which Israeli authorities said earlier in July they would be offering only to adults considered to be at risk. In making the announcement, Israel’s Health Ministry specifically mentioned people who have recently undergone an organ transplant or who have severe immunodeficiency.

It comes after Israeli authorities on Wednesday announced renewed restrictions as part of efforts to curb the spread of the Delta variant, including limiting attendance at large events to those who show a negative COVID-19 test result, have recovered from the illness, or have been vaccinated.

In the United States, officials have been raising the alarm over the Delta variant, with Dr. Rochelle Walensky, head of the Centers for Disease Control and Prevention (CDC), telling a Senate hearing on the federal response to the pandemic that Delta now accounts for around 83 percent of all new sequenced cases in the country.

The CDC has deemed Delta a “variant of concern,” and considers it to be more transmissible and potentially more resistant to vaccines.