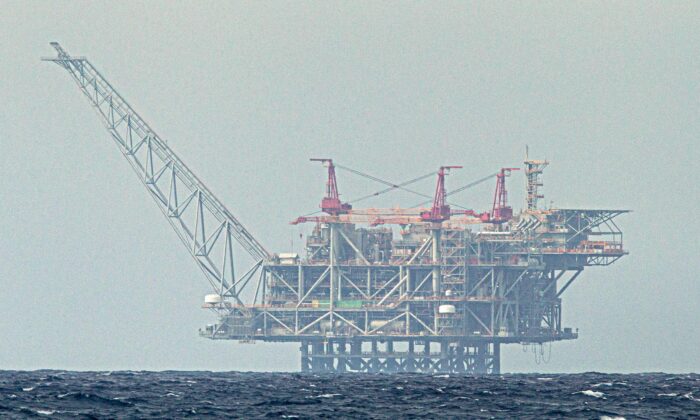 The platform of the Leviathan natural gas field in the Mediterranean Sea is pictured from the Israeli northern coastal city of Caesarea, on Feb. 24, 2022. (Jack Guez/AFP via Getty Images)
Thinking About China

This week, Israel officially positioned itself as a natural gas supplier to Europe, one of the largest markets on earth.

The announcement of an agreement signed by Israel, Egypt, and the European Union on June 15 at the East Mediterranean Gas Forum will be a huge deal for both Europe and Israel. The Europeans’ drive to find alternative sources of natural gas is a direct result of Russia’s invasion of Ukraine.

A Big Deal for Europe and Israel

For decades, Europe has relied on Russian natural gas, and on Russia’s good graces, for energy. Moscow has repeatedly shut off gas to European nations at will as a way of influencing policy.

Gaining new access to Israeli natural gas allows Europe to pivot away from Russia as its source for energy, particularly for its natural gas supply.

It’s also a huge advancement for Israel, as it leverages its Leviathan natural gas fields just off its coast in the Eastern Mediterranean for its entrée into the global energy market. The transportation plan is simple and will allow gas exports to begin sooner than many expected.

A Change in Plans

Initially, the long-term plan had been to build a pipeline from the gas fields in the Eastern Mediterranean to Cyprus, then to Greece, and on into Western Europe. Those plans have been challenged by Turkey, which claims ownership of natural gas. It has also claimed territorial rights to any pipeline that runs through Cyprus or crosses the maritime line that Turkey and Libya have claimed exists between their two countries.

But according to the new agreement, no new pipelines will need to be constructed, at least not right away. Instead, the plan is to use existing pipelines that run from Israel and Jordan to Egypt’s liquified natural gas (LNG) facilities. From there, the gas will be transported directly to European markets via existing shipping lanes to European port(s) within a couple of years.

As exports of LNG to Europe ramp up over the next couple of years, Israel will gain tremendous revenue inflows from its European customers at Russia’s expense. Currently, Europe relies on Russia for about 40 percent of its natural gas supplies. In 2021, that represented $119 billion in annual revenues flowing from Europe to Russia. Revenue flows will be even higher as energy prices continue to rise. Natural gas is nothing short of a strategic asset, as it’s the single biggest portion of Russian–European trade, constituting 36 percent of Russia’s total budget.

A Diplomatic Victory Across the Arab World

The deal is more than just an economic windfall for Israel. It demonstrates just how well Israel and its Arab partner, Egypt, can work together for their mutual economic benefit.

That message of cooperation and mutual benefit will be seen and heard loud and clear across the Arab and Islamic world. It’s not wishful thinking that Egypt’s cooperation will attract the same from other Arab nations that could benefit from better relations with Israel.

Furthermore, when LNG shipments begin to arrive in Europe, that will ‌alter the balance of power between Russia and Europe.

That’s good news for Europe and Israel, but it’s very bad news for Russia and President Vladimir Putin. From an economic standpoint, the impact of Europe ditching Russia as a supplier of both oil and natural gas will be catastrophic for the Russian economy.

Russia may have to find new markets quickly.

It’s worth noting that China is already buying Russian energy, providing Russia with revenues that rival the European market, even at discounted prices—but that may not last forever.

But the Israeli–European gas deal is also very problematic for Russia from a geopolitical perspective. Without the power to sway or punish Europe with threats of withholding natural gas supplies, Russia will have very little else with which to influence European policy.

Indeed, Moscow understands this as well as anyone, which adds a definite level of complexity, if not risk, to the new agreement.

How Will Moscow React?

How, for example, will or could Moscow react to this development?

As noted, it could be considered a threat to Russia, if not an economic act of war. It’s certainly not a deprivation of energy or food per se, but the net effect could be similar.

Moscow could interpret the new natural gas agreement in the context that the EU and Israel (two prominent critics of the Ukraine invasion) are cooperating—if not conspiring—to deprive Russia of its most important market.

That’s true. And it could well cause Russians to suffer great economic hardship. Moreover, Russia’s geopolitical influence in Europe and the rest of the world would diminish as well.

Would Moscow take a wait-and-see attitude toward Israel and the European Union, hoping it would be able to convince either party not to go through with the deal?

Or would it resort to a naval blockade of natural gas shipments into Europe to protect its economic interests?

Much may depend on the state of the outcome of Russia’s war against Ukraine, which is not readily foreseeable. But once Europe is free of Russian gas, it will no longer be a hostage to Russian blackmail, though it still risks being bullied by Moscow militarily.

That same reasoning also applies to Israel, and it’s keenly aware of Russia’s military presence on its northern border. More war from Russia over this deal could be in the cards.

After all, what other card does Russia have to play?