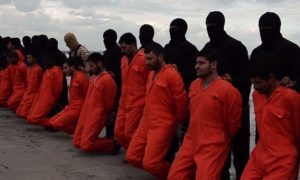 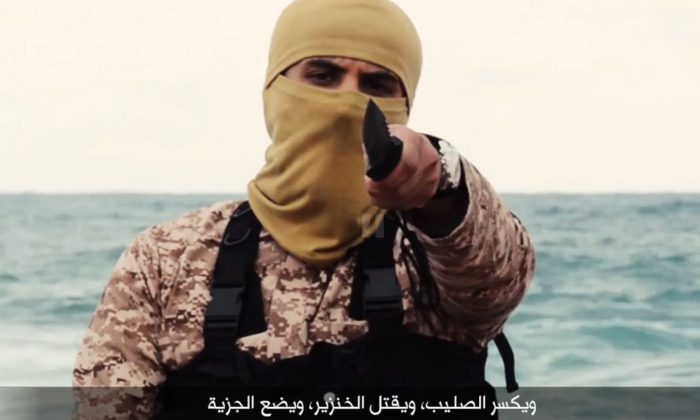 An ISIS militant in a screenshot of a propaganda video. (ISIS)
Middle East

Following the gruesome video that purportedly shows militants aligned with the Islamic State beheading 21 Egyptian Coptic Christians, serious questions have emerged about the stability of Libya.

More than two years ago, longtime Libyan dictator Moammar Gadhafi fell to rebels, ushering in what was supposed to be a new era of Arab Spring-style democracy in the country. Instead, what followed was government battles with rebel forces in Tripoli, while Islamist militants have taken over areas across the country.

As the Brookings Institute think tank notes, “most Libyan institutions [are] severely damaged by the fighting” and “only three institutions stand between Libya and absolute state failure: the Central Bank, the Ministry of Petroleum, and the Investment Authority.”

#Libya: #IS claiming control of #Nawfaliyah, near #Sirte. It is/was important #ASL foothold, so significant if true. pic.twitter.com/PoPUxMhD7Z

The Washington Institute quotes Aref Ali Nayed, Libya’s ambassador to the UAE, who paints a more alarming picture. He says the Islamic State, or ISIS, is “rapidly expanding and may threaten Europe, though the U.S. government assessment is less certain.”

“At the very least, ISIS has left its footprints in Benghazi, Sirte, Tripoli, and portions of southern Libya,” the Institute says. It’s worth noting that the 21 Egyptian workers who were kidnapped were working in Sirte, which is ISIS-controlled.

The country’s situation might only get worse. One of the ISIS “provinces” in Libya claims to have taken over the town of Nawfaliyah, according to the Long War Journal and IHS Jane’s.

The group released a photo set of a convoy of trucks with masked militants carrying ISIS black flags. They appear to be armed with assault rifles and the standard rocket-propelled grenade launchers.

“In addition to the jihadists’ purported gains in Nawfaliyah, the organization’s fighters seized several key buildings, including radio and television stations, in the city of Sirte. Separate photos posted on social media show the Islamic State’s province broadcasting propaganda from one of the captured media facilities,” reported the Long War Journal on Saturday. The radio station has since been broadcasting ISIS spokesperson Abu Muhammad al Adnani’s speeches.

In Sirte, a passport office was seized, with ISIS militants ordering the employees to “repent” and pledge allegiance to the “caliphate.”

ISIS, however, might face stiff opposition from other Islamist militants in Libya. For example, the Abu Salim Martyrs Brigade has not sworn allegiance to ISIS leader Abu Bakr al Baghdadi and the group controls much of the city of Derna. But the Washington Institute has said Ansar al-Sharia, traditionally a branch of al-Qaeda in Libya, might defect to ISIS.

For Western powers like the United States, the presence of ISIS is a daunting task to take on.

“One of the greatest obstacles to countering ISIS in Libya is finding the resources and will to organize a strategy and partners. This is especially true given the priority that Washington and others have assigned to fighting the group in Iraq and Syria,” the Washington Institute said and added that “any policy decision on what to do in Libya should be based on an accurate understanding of the changing extremist landscape.”