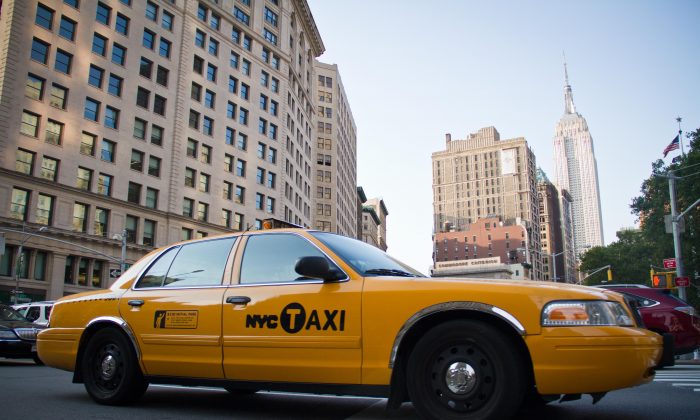 A taxi drives across 23rd Street in the Flat Iron District of Manhattan on July 7, 2012. (Benjamin Chasteen/Epoch Times
New York

NEW YORK—Despite sharing companies’ reputations as disrupters, in New York City apps like Uber and Lyft operate under the same black car service model that has been in place for decades. They play by the city’s rules, which has largely insulated the existing taxi and car-service businesses in a way other cities have not seen.

Since Uber’s entrance to the New York market in 2011, it has grown to have six bases and about 8,000 affiliated drivers, plus others affiliated with other bases but who drive for Uber as well. Lyft launched in the city just this year and has closer to 20 drivers at its one base, but it dispatches hundreds of for-hire drivers.

While protests that the new tech players would hurt the yellow cab industry have dimmed, the recent dip in medallion prices has the city concerned.

“We want to be sure that we create a fair situation for everyone,” said City Council member Ydanis Rodriguez, who hosted a hearing Dec. 3 on the effect of apps on the taxi and for-hire industries. “We also want to make sure that the value of the medallion continues to stay strong, as 20,000 people rely on that value, and we as a city rely on that value too.”

This November, there were three sales of independent medallions for around $840,000, which is about a 20 percent drop from the peak average of $1.05 million last summer.

At the hearing, several council members expressed concern at falling medallion values and whether the “playing field” was level between the old industry and new players like Uber, because lower market values mean less revenue for the city.

The city’s budget was updated in late November to project over $500 million less in revenue coming in from medallion sales, due to a reduction in the number of medallions it would release to the market.

According to Gotham Gazette, officials said the updated medallion sale projections are more realistic (200 medallions, versus 550), and the original plan was unprecedentedly aggressive.

At the hearing, Taxi and Limousine Commissioner Meera Joshi argued against the notion that medallions were losing their value and the taxi industry is heading towards a decline because of Uber.

“There’s a core loyalty to a gold standard of yellow taxis in this city that is here to stay,” Joshi said. She attributed the dip in prices to the wide array of transportation options people now have—Citi Bike, green cabs, promotions like free rides from app companies, and record subway ridership.

Joshi also argued that there is no best way to average medallion prices, and the averages are neither representative of medallion sales nor relied on by the industry.

Medallion broker Nat Goldbetter says one reason the sale prices have been lower in recent months is because banks are financing less of the purchases.

“Traditionally banks and credit unions would finance 90 percent, now they’re only financing 75 percent,” Goldbetter said. He says it’s largely because lenders are seeing the influx of Lyft and Uber vehicles on the road and are concerned about the number of yellow taxi drivers. “It’s not like there’s a lack of interest.”

On a taxi industry message board, owners posting individual medallion sale ads had asks as high as $1.15 million in September.

Another seller said the medallion is his mother’s, and they have had it for 26 years, but are worried Lyft and Uber will continue to depreciate the medallion value.

He said the industry is going through an adjustment period, not unlike the real estate market. Once prices start to drop, buyers want to pay less, and sellers want to hold out for more, so there have been fewer and fewer transactions throughout the year, Goldbetter said.

City Council is also interested in expanding the accessibility of taxis and for-hire vehicles to the disabled in outer borough communities.

The new medallions the city sells will have to be for wheelchair-accessible vehicles, and those are usually less desirable. “Drivers are not crazy about them,” Goldbetter said. The vehicles are clunkier and burn more gas. “There’s always these little factors that come in.”

As for the outer boroughs, the expectation is that technology will help.

The taxi industry has vocal critics who say it is slow to innovate, and the loss of market share stems from that. E-hails were only allowed to be introduced in 2013, and these still make up only a very small percent of pick-ups. There are also about 75 different platforms people can hail or request a vehicle from, making it a very fragmented market.

But the majority of e-hails are made outside of the Manhattan Central Business District, which effectively expands the transportation system, according to TLC Commissioner Joshi. Before the end of the year, the pilot will be made a permanent program with new rules.

Uber and Lyft also claimed to have brought service to previously underserved areas, but Joshi says based on what she is hearing from communities and the information she is seeing, that is not the case.

If it collects electronic trip data, TLC would be able to see if that is the case, she said, adding TLC would use the data to bring additional service to communities that lack it.

The TLC recently introduced new rules to collect trip data from for-hire bases electronically. Previously the data was available on request, but in the case of a crash TLC would need immediate access for their investigations.

This would also allow TLC to enforce a rule that prevents cross-class dispatching. Black cars and liveries currently have very different rules and TLC says the distinctions are here to stay. But Uber, a black car base owner, currently dispatches livery drivers, and automatic data collection on the TLC’s part would flag these cross-class dispatches.

Rachel Holt, Uber’s regional general manager for the East, said in her testimony the class distinctions were archaic, and not allowing cross-class dispatching would lead to inefficiencies in the market-place.

Uber continues to push back on the data collection rules as they stand, citing privacy concerns. The TLC has issued summonses to Uber bases for not sharing data when requested.

“With Vision Zero as our primary goal, especially when it comes to safety violations, we cannot afford to be uneven in the way we enforce against reckless driving,” Joshi said, referring to the mayor’s traffic safety initiative.

Uber and Lyft’s dynamic pricing model may be subject to more regulation as well. Council member David Greenfield recently introduced legislation that would limit what is known as surge pricing.

The services currently raise prices when there are more riders than drivers, and lower them as more drivers come online. It has proven to result in exorbitant bills during times of bad weather or high traffic events.

“We at the Council will ensure that we increase regulation to better oversee this rapidly transforming industry,” chair Rodriguez said.