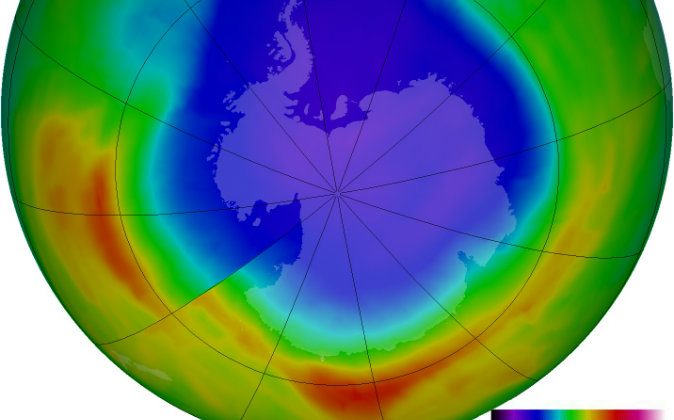 A depiction of the large hole in the ozone layer over the Antarctic as of September 2012. (NASA)
Environment

Is the Ozone Hole a Good Thing?

Why did it form in the Antarctic, not where the pollution is?
By Tara MacIsaac

Anyone directly under or close to the hole in the ozone layer would experience the negative effects, but luckily the hole opened up over the Antarctic where it would do the least amount of harm.

The hole is closing, and some scientists say its closing could accelerate global warming—though the magnitude of the impact is uncertain.

Jonathan Shanklin of the British Antarctic Survey, one of the scientists who discovered the hole in the ozone, told National Geographic in 2010: “It’s very difficult to quantify the impact on a global scale, but I think the evidence suggests filling the hole will have a regional effect on the Antarctic, possibly leading to more warming for the bulk of the Antarctic. … That could drastically change predictions about global sea level change.”

Ozone is itself a greenhouse gas, though the ozone layer is necessary for protecting life on Earth against harmful ultraviolet rays.

Is it also possible that the hole in the ozone has let pollutants out of the Earth’s atmosphere, like letting dirty gas out of a balloon? Shanklin said in an email to Epoch Times that most pollutants, such as nitrogen oxides and carbon monoxide, are “removed in the lower atmosphere, through oxidation and precipitation, so escape into space is not really a consideration.”

Scientists continue to come to new understandings of the hole (or rather holes, as more have been found over the years). In 2009, the U.S. National Oceanic and Atmospheric Administration (NOAA) reported that nitrous oxide is a leading cause of ozone depletion.

Not Only CFCs, But Also Nitrous Oxide a Leading Cause of Depletion

While nitrous oxide had been known for decades to contribute to depletion, the 2009 study took a close look at the extent to which it could have an effect.

“Manmade nitrous oxide is now the elephant in the room among ozone-depleting substances,” said A.R. Ravishankara, lead author of the study, according to NOAA. Nitrous oxide is a type of nitrogen oxide, a greenhouse gas released by livestock manure, sewage treatment, combustion, and some other industrial processes. Bacteria also naturally release nitrous oxide when they break down nitrogen-containing compounds.

Human activities account for about one-third of global nitrous oxide emissions, according to NOAA.

Shanklin told National Geographic: “One lesson is that the planet can change very rapidly in an unexpected way.”

“Nobody was expecting to see anything like this in the Antarctic,” he said.

So, why did the depletion occur most heavily over the Antarctic and not over populated areas where the pollution originates?

A file photo of penguins in the Antarctic. (Shutterstock)

Here’s how scientists explain the formation of the hole over the Antarctic:

A complex chain of chemical reactions occurs in these clouds. Basically, chlorine found in CFCs alternately attaches and breaks apart from various substances and maintains various states throughout the cold, dark period. When the season changes and ultraviolet light rays strike, chlorine atoms are freed and they destroy the ozone layer.

These reactions did not take place on such a large scale in the Arctic, say researchers, because temperatures don’t drop to the same lows for the same extended periods of time as in the Antarctic. This has changed some over the years, and concentrated depletion has also been observed over the Arctic.

When the polar stratospheric clouds dissipate in the warmth of summer, the chlorine again bonds with other substances and the ozone layer replenishes.

So, it is by quite a complex chain of events that the hole comes to be so far from CFC sources, and from heavily populated areas where it could do more damage. CFC use has dramatically decreased, but as nitrous oxide emissions continue to reach the stratosphere, it remains to be seen how they could impact the predicted closing of the ozone holes.

A diagram illustrating where the stratosphere and ozone layer are. (NOAA)