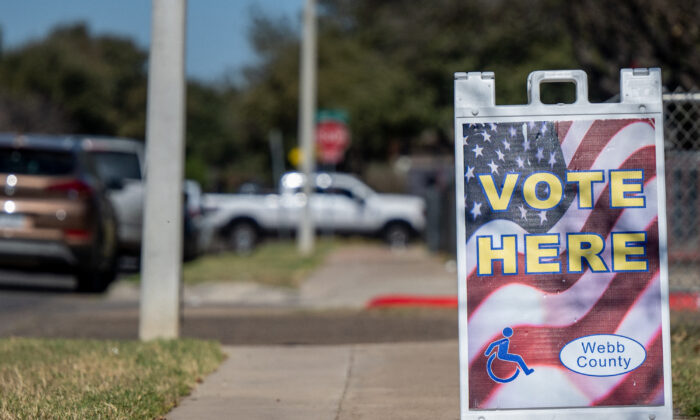 A 'Vote Here' sign is displayed near a polling station in Laredo, Texas, on March 1, 2022. (Brandon Bell/Getty Images)
Viewpoints

Is the Current Republican Primary Wave Further Evidence of Foul Play in 2020?

Republicans certainly have much to be excited about with the voting turnout in this Spring’s primaries.

According to JMC Analytics, which is examining the results of the primaries so far, says the following:

“And what started with the Texas primary (a 60% Republican electorate in 2018 increasing to 65% in the March primary) has almost without exception been the case in the other nine primaries held between May 3 and last night [May 17]. Not only has (in the 10 state contests analyzed) the Republican share of the electorate increased from 53 to 61%, but overall turnout has increased 15% (a 32% increase in Republican primary turnout coupled with a 3% decrease in Democratic turnout).”

This is bad news for the Democrats indeed, and suggests a possible so-called wave election coming this November. An interesting comparison of the 10 states in 2018 and 2022 can be seen at this link.

According to JMC, the Republican share of the electorate jumped by 8 percent, a huge amount in a putatively 50-50 country. They also have that 32 percent increase in turnout compared to a 3 percent Democratic decrease. The Republicans, if we are to believe this, are suddenly a solid majority party in our previously split country. The recent switch of Elon Musk can’t explain all of this (just kidding, sort of).

Some of it, obviously, can be ascribed to the extraordinarily inept Biden administration that has brought us everything from rampant inflation, to the humiliating departure from Afghanistan, to virtually unchecked crime and homelessness in our cities, not to mention an absurdly open border exacerbating an already deadly fentanyl epidemic and so many other disasters large and small.

Nevertheless, something else may be afoot here. These numbers may not be all that new in the final analysis. They could just be an increase of what already occurred a year and a half ago.

It could be that, at least to some degree, they are a further indication of what Trump has literally been shouting about since the 2020 election, sometimes to the embarrassment of his fellow Republicans: He won.

Could the man, Joe Biden, so many are apparently fleeing from in these primary results actually have attracted the highest number of votes in American presidential history that very year and a half ago?

If so, that’s some turnaround!

On the other hand, if you watched Dinesh D’Souza’s film “2000 Mules” (based on the exhaustive research of Catherine Engelbrecht) you have at the least had your suspicions raised. The movie contends that thousands of people were hired to dump untold votes into unsupervised boxes in the small hours of the morning.

Engelbrecht and researcher Gregg Phillips have produced videos of these people doing just that and also geo-tracked many of these same people via cell phones as further evidence of the crimes they were committing.

I have yet to see any genuinely substantive attacks on their findings, other than the usual “debunking” from the usual suspects. It’s as if the entire legacy media were transformed into those three Japanese monkeys who see no evil, hear no evil, and speak no evil when it comes to the Democratic Party. (Well, they have been those monkeys for quite a while actually, more like decades.)

Curiously, however, the legacy conservative media have been unanimous in their silence, as if somebody (lawyers? the actual brass of the companies?) ordered them not to report on the movie, although Tucker Carlson did interview Engelbrecht favorably, but not D’Souza.

These primary results are not what you would call dispositive (settling the issue) of the 2020 election, but they are another indication that something may be rotten not in Denmark this time, but in the United States of America.