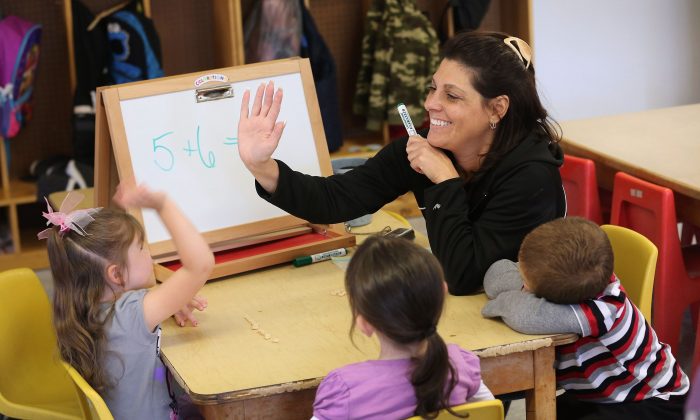 Some researchers say the unbridled promotion of self-esteem in recent decades has led to rising levels of narcissism and entitlement in youth. They suggest the concept of self-compassion could be a positive alternative in building self-worth. (John Moore/Getty Images)
Canada

Is Self-Compassion the New and Improved Self-Esteem?

In the late 1960s Canadian psychotherapist Nathaniel Branden unintentionally sparked what would become the self-esteem movement when he published his international bestseller, “The Psychology of Self-Esteem.”

Low self-esteem was the root problem for individuals, suggested Branden, making it the root of most societal problems and dysfunctions as well. Countless other books and academic studies followed claiming self-esteem was related to a long list of social ills: violent crime, drug and domestic abuse, teenage pregnancy, poverty, pollution, underachievement in schools, homelessness, AIDS, hunger, and even racism.

Policy makers took this idea and ran with it. By the 1980s, self-esteem theory was woven into the realms of education, health care, welfare, and criminal justice across Western societies in an attempt to banish low self-esteem forever.

With kids having just started the new school year, enhancing students’ self-esteem will continue to be a priority for many schools—often more so than evaluation and accomplishments.

But the cracks are beginning to show. Narcissism levels are up, and several social surveys say Millennials have more entitlement and unrealistic expectations than previous generations.

Materialistic and individualistic values are also on the rise. A recent Pew Research survey revealed Millennials were twice as likely as baby boomers to describe their generation as “self-absorbed” and “greedy,” while much less likely to say they are “moral” or “willing to sacrifice.”

Self-compassion provides an island of calm, a refuge from the stormy seas of endless positive and negative self-judgement.
— Kristin Neff, University of Texas

The problem was the way self-esteem was sold. Kids were told they were special little princes and princesses, many sports organizations banned “winning” and “losing,” traditional grading schemes were changed in some schools, etc.

But some say this artificially created self-esteem is essentially phony and fragile—it isn’t based on personal effort or character, so it needs a constant stream of external validation to maintain it. For many, this pseudo self-esteem followed a boom or bust cycle: When success was abundant it soared, when failure or criticism struck it tanked.

One former student describes this feeling on the popular photo-blog Humans of New York: “When I got to Harvard, everyone around me was just as smart or smarter. My grades fell, and suddenly I was no longer exceeding expectations. All that external validation that I’d become accustomed to suddenly stopped. And I crumbled. I felt lost. I learned that I hadn’t formed an identity beyond making people proud of me.”

In recent years, a growing number of researchers have been saying there is a healthier alternative to self-esteem promotion that would achieve what the movement originally intended—without the pitfalls. It’s called self-compassion.

Being self-compassionate looks much the same as being kind to others: showing warmth, caring and kindness to yourself, especially in times of stress or hardship, in the same way you would toward a friend.

Self-compassion stems from the Buddhist concept that suffering and personal inadequacy is part of the shared human experience—something that we all go through. So it asks adherents to be kind and understanding when confronted with personal failings while learning from the experience as an aspect of wise self-care and personal growth. It also promotes “mindfulness”—acknowledging difficult thoughts and feelings without judgement in order to avoid getting overwhelmed by emotion, negative thinking, and impulsive reaction.

Essentially, self-compassion is about tackling and eventually overcoming the “inner bully” and creating a stable source of self-worth.

It may all sound like warmed-over fragments from the hippie movement, but self-compassion is joining the ranks of related concepts such as meditation and mindfulness that are getting serious backing by scientific studies and academic heavyweights like Harvard and Yale.

Kristin Neff, an associate professor of human development and culture at the University of Texas, is a pioneering researcher in the field of self-compassion. Stumbling on the concept in a Buddhist meditation class, she experienced the transformative benefits it held and decided to study it in depth.

In her research, Neff found that self-compassion offered the same protection against harsh self-criticism as self-esteem, but without the need for perfectionism, competitiveness, or superiority. It was also resistant to narcissism, ego-defensive anger, inaccurate self-perceptions, anxiety, thought-suppression, and depression—all common drawbacks in the pursuit of self-esteem.

One of the biggest barriers people have to self-compassion, says Neff, is the notion that they will become too “soft” and self-indulgent if they aren’t hard on themselves. But Neff found the opposite to be true. Early research shows the concept is transformative in everything from eating disorders and attitudes toward aging to caregiver burnout and PTSD.

When people were able to be compassionate and understanding toward themselves, they were more likely to show social connectedness, personal responsibility, motivation to change, and emotional resilience. It was also linked to life satisfaction, wisdom, happiness, optimism, and curiosity.

“Self-compassion provides an island of calm, a refuge from the stormy seas of endless positive and negative self-judgement, so that we can finally stop asking, ‘Am I as good as they are? Am I good enough?'” wrote Neff in her book “Self-Compassion.”

Some are skeptical of the concept, however, and view it as a form of self-pity and the latest in a long line of pop culture self-help trends.

“‘Compassion’ means ‘pity.’ So those who promote ‘self-compassion’ should ask themselves whether they want to promote self-pity,” says Stewart Justman, author of the 2005 pop psychology critique “Fool’s Gold” and director of the liberal studies program at the University of Montana.

“Trends like this one build on themselves, become movements, and ultimately can change the way we speak. But I still doubt it’s going to make us actually like people who play the victim.”

This potential pity party was what concerned U.K.-based psychotherapist Allie Phipps most as she walked into her first mindful self-compassion (MSC) workshop in 2012. But the experience was “mind-blowing” says Phipps, and she came away from the session with a new understanding of how her harsh self-criticism had become an emotional road block in her life.

“It was just this enlightened moment, like, ‘Oh my god, this is why it’s been so painful. Thank goodness I know,'” she recalled.

As Phipps continued her self-compassion training and practice, eventually becoming a certified MSC teacher, her life transformed, she says. One of the most dramatic changes was her relationship with her 19-year-old son who was diagnosed with both Asperger syndrome and ADHD, and was prone to daily rages that lasted hours.

As Phipps began to relate to herself and her son in a more compassionate way, his outbursts started to subside and nearly disappeared. He became more considerate and understanding of others. Her stress levels plummeted.

“It feels like that sense of goodwill from me to my son remains open even if there are a lot of difficult emotions flying around,” she says. “The more I’ve become compassionate and accepting of me, my compassion just naturally flows for other people in a way that it didn’t before.”

Formally known as the “ice-maiden” at work, Phipps now gets compliments from strangers about her gentle demeanour and her kindness. The self-compassion training has also helped to silence her “cruel” self-critic, she says. Her constant negative thoughts about herself have virtually disappeared. She’s also ended destructive relationships and healed lifelong resentments.

Most people have doubts about the practice at first, she says, but so far the results for her students are often as inspiring as her own.

Marjorie Hansen Shaevitz, author of several books on women and self-worth, says the concept could be particularly beneficial for women and young girls, who tend to struggle with negative self-image and critical self-talk.

“Women have real trouble being good to themselves, because they feel selfish. And in fact, historically speaking, being selfish is the worst thing that a woman can be,” she says.

“[Self-compassion and mindfulness] is not necessarily being self-indulgent or selfish, it’s simply getting yourself in line, taking care of yourself so that you have attention, energy, and ability to actualize all the best parts of yourself.”