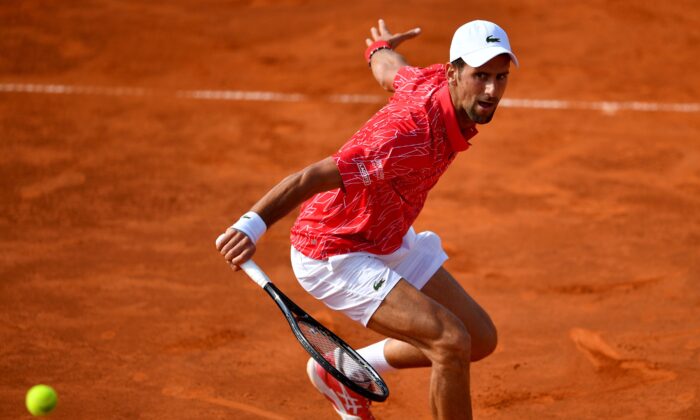 Novak Djokovic was considered certain to lose his No. 1 world tennis ranking after being ejected, after a seemingly endless back and forth, from Australia for refusing vaccination against COVID-19.

He was therefore unable to play in January in his favorite Grand Slam event, the one he had won a record nine times: the Australian Open. It was won, in his absence, by rival Rafael Nadal, who was able to edge ahead of Djokovic and Roger Federer—all three were tied at 20 Slams—and win his 21st in Australia.

Simultaneously, Djokovic’s record-breaking number of weeks at No. 1 appeared doomed to come to an end. Not only could he not play in Australia, but he also couldn’t play in the USA at the ATP Masters 1000 tournaments—most important except for the Slams—in Indian Wells and Miami, both of which he had won many times.

And Djokovic, evidently a man of principle and a supporter of medical freedom, wasn’t getting vaccinated.

But then, whether by blind luck or divine intervention, something happened.

The reigning No. 2, the Russian Danil Medvedev, who had briefly usurped Djokovic’s ranking and was properly seeded first in the two tournaments, unpredictably (literally against all odds) lost in the early rounds in both—so early that his ranking fell.

On top of that, Medvedev developed a small hernia, for which he needed surgery that would keep him out of play for a month or two, probably enough to miss the next Slam, the French Open.

So, mirabile dictu, according to the ranking system of the Association of Tennis Professionals, Djokovic, although mostly forbidden from playing, still stands at No. 1 for 363 career weeks and counting, lapping Federer by more than 50 weeks and Nadal by well over 100, a record so extraordinary it seems destined to last until people are robotic.

But why—except to die-hard Djokovic fans (like yours truly, admittedly)—is this important?

In a world governed by control freaks pretending to be “liberals” who wish to maintain power over our every action, particularly as regards our health (i.e., our very own bodies) a well-known figure of Djokovic’s dimension standing up for medical freedom isn’t just useful, it’s quite literally a godsend. There should be as many as possible.

But few, evidently, have the courage. Standing up in this universe of “woke” is difficult, to say the least, especially for public figures who, they assume anyway, have so much to lose.

So Djokovic—despite having made mistakes such as getting over his skis with his own tennis tournament, the Adria Tour, during which some of the players came down with COVID—deserves to be celebrated.

His ability not to fold with almost all the tennis bureaucracy, plus much of the woke sports world and media in its entirety (cf. ESPN), against him is heroic. It would have been easier, as many advised him, to quietly get the shots and start playing again.

Even now, it will be difficult for him to play in many tournaments, possibly forgoing the chance to play in future Grand Slams and, therefore, passing up the opportunity that was surely his to be declared the Greatest of All Time at his sport once and for all.

Djokovic, it’s worth noting, is a multiple winner of the Laureus Prize, for the single greatest athlete in the world for a given year. The prize, more known in Europe than it is here, also has been awarded to the likes of Usain Bolt, Roger Federer, Tiger Woods, Lionel Messi, and Formula One driver Lewis Hamilton.

He further has winning records against both Federer and Nadal and is the only person ever to have won all nine ATP Masters Tournaments, which he has done twice—the so-called Career Golden Masters.

Almost nightly, I have heard Sean Hannity say on his show that we need to keep politics out of sports. Those comments are a respite.

I agree with him, but it’s already too late. Our sports have become infused with politics. Dr. Anthony Fauci already warned us not to go unmasked to football games or it would be a medical disaster. (He was dead wrong, as Clay Travis pointed out.)

So—just as, in retrospect,  I would have rooted for Jesse Owens at the 1936 Olympic Games or the American Don Budge to have defeated Germany’s Gottfried von Cramm in the 1937 Davis Cup (sometimes known as “the greatest tennis match ever”), both in the shadow of Hitler—I will be rooting like hell for Djokovic in the French Open starting March 22, assuming that he’s allowed to play.

Unfortunately, that isn’t at all clear. But his contribution to medical freedom is already there. And that’s more important in the end—is it not?—than even being declared the greatest of all time in your sport.

But wait, as they say, there’s more … and it could be significant beyond tennis—way beyond. As I finished this column, I read that an unprecedented number of 15 tennis players have dropped out of the Miami Open.

Strange indeed! As mentioned above, Medvedev, one of the world’s great athletes, has dropped out of competition alleging a hernia. I watched him play in Miami on television. Like Jannik Sinner, also a superbly conditioned athlete, he was doubling over constantly.

Hernia? Maybe. But with 15 dropouts (unheard of in a tennis tournament, major or minor), I’m starting to wonder what’s really going on.