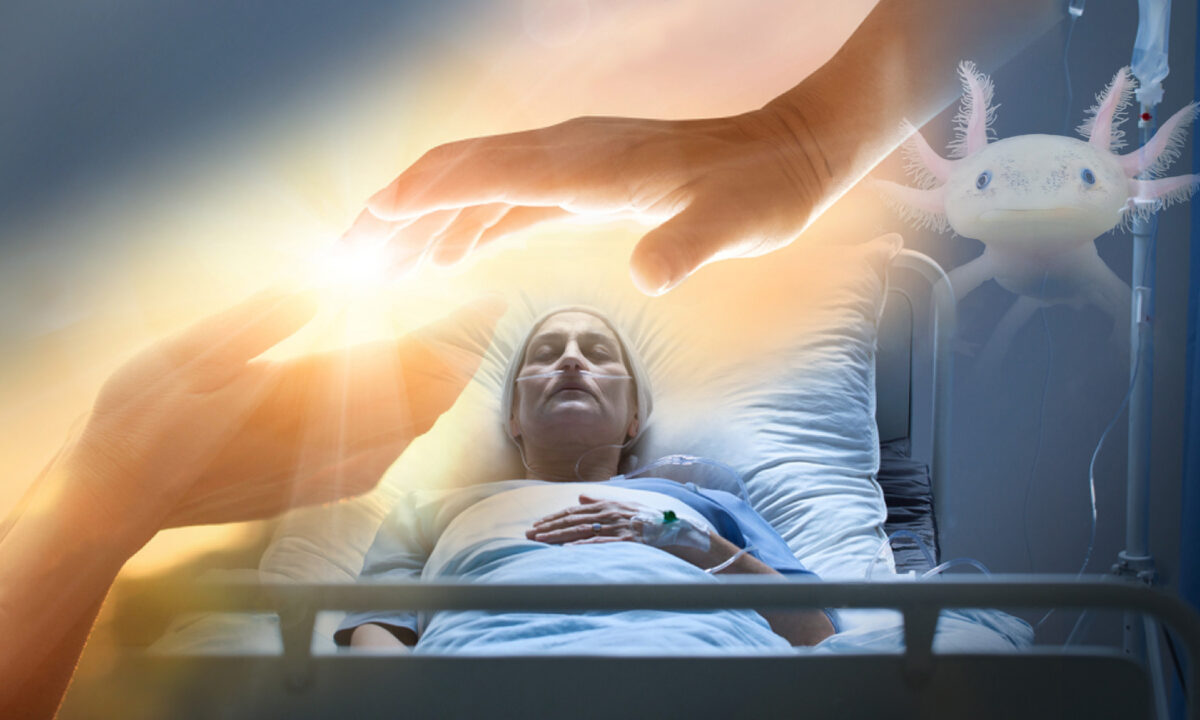 Is Death Reversible? Scientist Shows How ‘Brain Dead’ Patients Could Regenerate, Like Salamanders

Death is defined as the termination of all biological functions that sustain a living organism.

Brain death, the complete and irreversible loss of brain function (including involuntary activity necessary to sustain life) as defined in the 1968 report of the Ad Hoc Committee of the Harvard Medical School, is the legal definition of human death in most countries around the world.

Either directly through trauma, or indirectly through secondary disease indications, brain death is the final pathological state that over 60 million people globally transfer through each year.

We are repeatedly told through the medical establishment that brain death is “irreversible” and should be considered the end of the line.

Have we come to a technological point where we are able to “push the envelope” to see if this is truly the case?

While it is true that human beings lack substantial regenerative capabilities in the central nervous system, many non-human species, such as amphibians, planarians, and certain fish, can repair, regenerate, and remodel substantial portions of their brain and brainstem even after critical life-threatening trauma.

Many non-human species, such as amphibians, planarians, and certain fish, can repair, regenerate, and remodel substantial portions of their brain and brainstem even after critical life-threatening trauma.

These epimorphic capabilities have been leveraged experimentally in past decades to perform complex brain transplantation in organisms such as salamanders, as well as to study the dynamics of memory storage.

Extensive study over the last century has helped us gain a substantial amount of knowledge on the processes of epimorphic, intercalary regeneration and the unique and multi-mechanistic dynamics that are involved in restarting a defined generative developmental pattern to specifically fill in missing or damaged tissues and organs in a living organism.

Additionally, recent studies on complex brain regeneration in organisms such as planaria, amphibians, and holomorphic insects have highlighted unique findings in relation to the storage of memories following destruction of the entire brain, which may have wide-ranging implications for our understanding of consciousness and the stability of memory persistence.

Investigations into the areas of biologic information-processing in aneural organisms, non-neural human tissues, and single-cell organisms that form multi-cellular structures, add to a fascinating portfolio of questions, and potentially challenge the notion of the brain as the sole repository of longterm encoded information.

Despite the label of irreversibility associated with the 1968 Harvard Ad Hoc Committee definition, there are several documented cases in the literature of potential brain death reversal, primarily associated with younger subjects whose central nervous system maintained some degree of underlying neuroplasticity.

As most leaders in this field acknowledge that residual “nests” of neuronal activity and residual blood flow do indeed exist in the recently diagnosed brain-dead, it makes sense that such revivals are theoretically possible with the right neuro-regeneration and remodeling tools.

We don’t think much about it any more, but the first cardiac defibrillation, mechanical pulmonary respiration, and complex organ transplants all made their public debuts around a century ago.

So here we sit, at a very unique moment in scientific history where the convergence of the tools of regenerative biotechnology, resuscitation/ reanimation research, and clinical neuroscience have placed us on the verge of being able to answer some unique, profound, and controversial questions.

The question is, do we take the next steps?

Ira S. Pastor is the chief executive officer of Bioquark Inc., a life sciences company focusing on developing biologic solutions for human regeneration, repair, and rejuvenation. He has 30 years of experience across multiple sectors of the pharmaceutical industry, including pharmaceutical commercialization, biotech drug development, managed care, distribution, and retail.