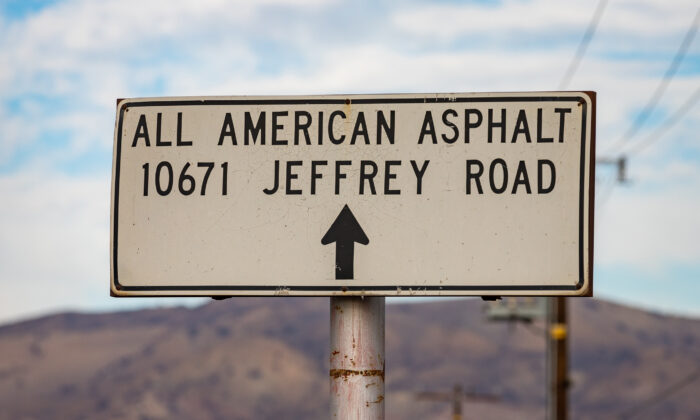 IRVINE, Calif.—An asphalt plant that residents say has been causing odor for years received Jan. 18 its second violation in a week, authorities say.

All American Asphalt, located in Northeast Irvine’s Loma Ridge foothills, was cited by the air pollution agency, called South Coast Air Quality Management District, for “discharging … air contaminants which cause nuisance to a considerable number of persons or to the public.”

Local residents, some of whom live less than a mile away from the plant, say the odors and accompanying toxins in the air have been causing itchy eyes, headaches, and more.

“Residents are frustrated because we’re three years in and we’re still trying to encourage residents to make complaints because it’s the only legally enforceable process to deal with All American Asphalt,” Kim Konte, a resident who lives within the affected area and founder of community group Non-Toxic Neighborhoods, told The Epoch Times.

An earlier Jan. 13 citation by the air pollution agency came after it received 14 complaints in one day about the bad air quality coming from the plant. After receiving the complaints, inspectors were dispatched to the scene and were able to trace the odors back to the plant.

All American Asphalt was not available for comment by press time.

Irvine Councilman Larry Agran, who has been a supporter of the community group’s quest to find a solution to the odors, said the plant needs to be shut down so residents can breathe fresh air again.

The violations are “just a part of the larger, now well-documented problem,” Agran told The Epoch Times, describing how residents have been dealing with the odors for years. “The only reliable solution to this problem is the plant’s shut down and removal, something that needs to happen right away. The continuing assault on folks is intolerable and needs to stop immediately.”

According to the air pollution agency, the asphalt company has received six violations and has received over 1,200 complaints from residents since 2019.

In response, according to the pollution agency, the plant installed new equipment to reduce the odors, which resulted in a “significant decrease” in complaints over the past year.

But Konte, the local resident, said she disputes that claim and said air quality has never been worse.

According to Konte, air quality control has been slow to issue violations, and the issue has only worsened since last August. It was at that time, she said, that the asphalt company received a permit for a new piece of equipment that creates asphalt out of discarded scrap rubber.

According to the air pollution agency, the asphalt company has, thus far, $53,000 in fines.

“[They’ve] exposed our community to over a year of those toxins, with zero consequences,” she said. “$53,000 is such a slap on the wrist. It’s a joke, they laugh all the way to the bank.”