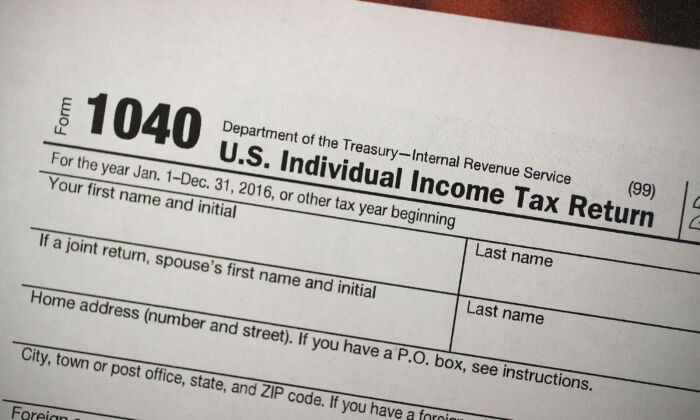 The Internal Revenue Service (IRS) announced on Aug. 24 that it will waive penalties levied against American taxpayers who failed to file their 2019 and 2020 returns in a timely manner during the COVID-19 pandemic.

The agency will also issue over $1.2 billion in refunds or credits to taxpayers who received the fees.

According to the IRS, roughly 1.6 million taxpayers, including individuals and businesses, will automatically receive the billions in refunds or credits by the end of September. Spread across 1.6 million taxpayers evenly, that would amount to an average refund of $750 per taxpayer.

The penalty relief is automatic for people or businesses who qualify, meaning taxpayers won’t have to apply for it.

For those who haven’t yet paid fines, the penalties will be abated.

The agency previously extended the tax filing deadline in both 2020 and 2021 to give taxpaying individuals and businesses more time to pay what they owed amid the COVID-19 outbreak.

“Throughout the pandemic, the IRS has worked hard to support the nation and provide relief to people in many different ways,” said IRS Commissioner Chuck Rettig. “The penalty relief issued today is yet another way the agency is supporting people during this unprecedented time.”

The decision comes as the agency faces a huge backlog of tax returns and taxpayer correspondence prompted by the pandemic. The IRS said the move will help them to focus resources on addressing those backlogs and return to normal operations for the 2023 filing season.

A failure-to-file penalty is charged when taxpayers do not file their return by the due date; the fine is a percentage of the taxes that weren’t paid on time. It is calculated at 5 percent of unpaid taxes for each month or part of a month that the return is filed late, up to a maximum of 25 percent.

The IRS will not forgive penalties in some situations, however, such as where fraudulent returns were filed and where the penalties are part of an accepted compromise or a closing agreement. They also won’t apply to cases where the penalties were finally determined by a court, the agency said.

Other penalties, such as the failure to pay penalty, are also not eligible under the new relief program, although taxpayers in those cases can utilize other existing penalty relief procedures, such as applying for relief under the reasonable cause criteria or the First Time Abate program.

“Penalty relief is a complex issue for the IRS to administer,” Rettig said. “We’ve been working on this initiative for months following concerns we’ve heard from taxpayers, the tax community, and others, including Congress. This is another major step to help taxpayers, and we encourage those affected by this to review the guidelines.”

Additionally, the IRS is providing penalty relief to banks, employers, and other businesses required to file various information returns.

The relief also covers filers of various international information returns, such as those reporting transactions with foreign trusts or those with ownership interests in foreign corporations. To qualify for the relief, any eligible tax return must be filed on or before Sept. 30, 2022.

The announcement comes amid growing fears that the newly signed Democrat-backed Inflation Reduction Act, which provides nearly $80 billion in IRS funding, including $45.6 billion for “enforcement,” will be used to target small businesses or middle-income Americans.

Biden administration officials and Rettig have vehemently denied this, stating that the extra funding will instead help get the agency “back to historical norms in areas of challenge” and that the boosted resources are “absolutely not about increasing audit scrutiny on small businesses or middle-income Americans.”

However, Republican lawmakers and experts, including Sen. Ted Cruz (R-Texas) have raised concerns that the newly-bolstered IRS enforcement funds will instead be used to “target Americans with 1.2 million new audits, more than half of which would be for people making less than $75,000 a year.”