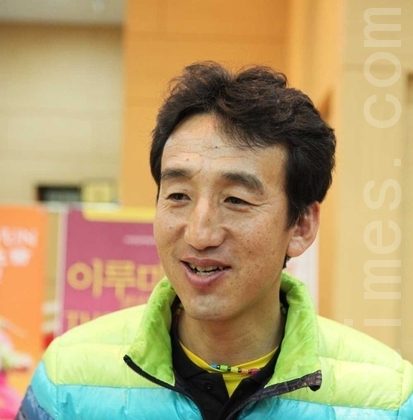 ANYANG, South Korea—Shen Yun Performing Arts New York Company performed at the Anyang Arts Center on March 3. Ironman Asia Champion, Bak Byeong-Hun, was in the audience seeing Shen Yun for the first time. He said he was thrilled by the performance of the male artists. “It would be a tremendous honor if I could be one of them! … Shen Yun’s production is the best,” Mr. Bak said.

He said at intermission, “It’s fantastic. I see China from Shen Yun, and the traditional culture of minorities.”

“A friend of mine told me that I would regret it if I did not come,” he said, glad that he finally had the opportunity to see Shen Yun. “I was most impressed by the Tibetan dance Khata for the Gods, and the Joyful Little Monks and How the Monkey King Came to Be are very interesting. The little monks were so naughty, they were so cute.”

“In a very short time-span, the show presents the whole Chinese history. There is a program that tells the story of how Falun Gong practitioners peacefully protest the persecution against them. I will recommend my family and friends to see the show.”

Mr. Bak said he admired the male artists in particular. “They performed the most exquisitely in every aspect. Their movements are very flexible. Even an athlete would have to go through a long hard training process to be able to do that. How do the artists do that? They probably went through a very long training process. Their performance looks very natural, which means that they had worked very hard.”

“If I was a professional artist and could stand among them and be one of them, I would feel so honored! Shen Yun’s production is the best!”

Mr. Bak expressed his regret that Shen Yun is unable to perform in China. The traditional arts and values that Shen Yun presents are not able to be shown in China today. “It’s a shame that Falun Gong is persecuted in China. I hope Shen Yun can go to China soon,” he said.

‘I see hope for China’s future’ in Shen Yun

The Director of the South Korea Division of Overseas Chinese Democracy Coalition, Mr. Wu Zhenrong, watched the evening show with eight Chinese friends. He said that Shen Yun used the form of arts to carry forward traditional Chinese culture, and he saw a new era and the hope for China’s future in the show.

He explained, “There were two programs which stood out to me. One is the Tibetan dance Khata for the Gods, and the other is the Taiwanese dance ‘In the Mountains (Taiwanese Amei Dance)’. These two dances have far-reaching significance. In the program Khata for the Gods, “dancers step and stomp, spin and soar, with joyful and vibrant energy,” according to the program.

Besides, the performance of erhu was very touching and wonderful, said Mr. Wu.

“China is a country with multiple races. This evening show displayed multi-ethnic arts on the stage. I feel very happy and very appreciative, as they especially use a traditional approach to interpret Chinese culture. People can only see the performance of pop songs on television in China nowadays. But here, we can listen to bel canto style singing, which is very formal, very traditional, and also very beautiful,” he added.

Especially impressed by the first program, An Era Begins, Mr. Wu said, “This scene left a deep impression on me, as if it ushered in a new era for us, which is the hope for China’s future. The show also showcased the Chinese communist regime’s persecution of kind people, including Falun Gong practitioners … However, I particularly feel that I see hope for China’s future. My feeling is very good.”

Mr. Wu said, “A Korean who sat next to me told me that it was very rare for him to see Chinese show. After seeing the show, he said with his not-so-fluent Chinese, “Good! good! good! I was deeply moved.”

“This artistic show is very elegant, with strong cultural flavor. I think such a great show will, of course, attract many well-known figures in the cultural and artistic circles, as good things are always appealing. But it’s rare to see this kind of good show,” said Mr. Wu.