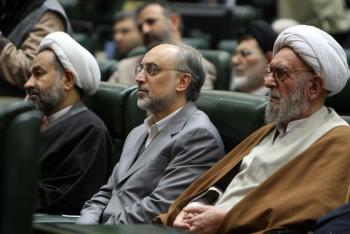 Iran's atomic chief Ali Akbar Salehi (C) listens along with other unidentified officials to a speech in 2009. Salehi said Iran was ready to engage in new negotiations about its nuclear program. (Atta Kenare/AFP/Getty Images)
Middle East

Jasper Fakkert
Editor-in-Chief, U.S. Editions
Jasper Fakkert is the Editor-in-chief of the U.S. editions of The Epoch Times. He holds a Bachelor's degree in Communication Science and a Master's degree in Journalism. Twitter: @JasperFakkert
View profile
Follow
biggersmaller
Print
Just days after the EU imposed a new set of sanctions on Iran over its nuclear program, Iran's atomic chief Ali Akbar Salehi said Friday that Iran was ready to engage in new negotiations about its nuclear program.

The atomic chief  told Iranian media that the country would be ready to start talkswith the Vienna group within the next few days. The Vienna group consists of the United States, Russia and France and the International Atomic Energy Agency.

The United States and other nations believe that Iran is attempting to develop nuclear weapons. Tehran denies that its nuclear program is aimed at building weapons insisting that the program is for civil purposes only.

Salehi told Iranian news agency Tabnak, that “If the fuel needed to power the medical research [reactor] in Tehran would be provided, Iran will not need to produce uranium enriched to 20 percent.”

In May this year Iran, Tukey and Brazil agreed on a nuclear-fuel-swap deal. The deal allows Iran to ship low-enriched uranium to Turkey in exchange for nuclear fuel for its research reactor. However, according to the U.S., this deal did not represent a significant change to Iran’s nuclear program.

On Sunday, Iranian President Mahmoud Ahmadinejad warned that “any actions” by countries which have imposed and supported sanctions on Iran “will be met with speedy responses from Iran, which will make them repent.”