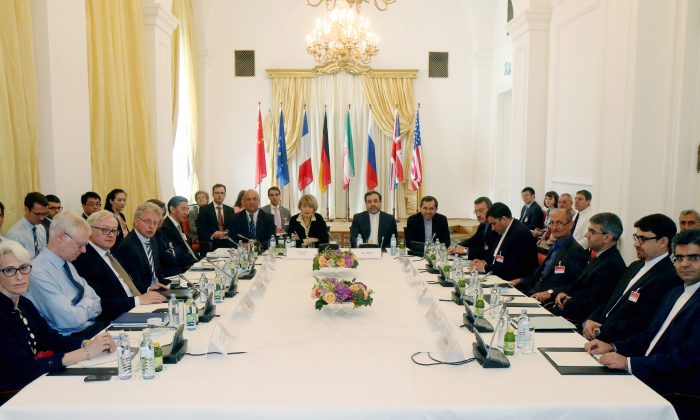 Delegates sit around a table prior to a bilateral meeting as part of the closed-door nuclear talks with Iran at a hotel in Vienna, Austria. Iran and six powers are still apart on all main elements of a nuclear deal with less than two weeks to go to their June 30 target date and will likely have to extend their negotiations, two diplomats tell The Associated Press. (AP/Ronald Zak)
Europe

Iran Nuke Talks Impeded by Disagreement on All Main Elements

VIENNA—Iran and six powers are still apart on all main elements of a nuclear deal with less than two weeks to go to their June 30 target date and will likely have to extend their negotiations, two diplomats tell The Associated Press.

Their comments enforce concerns that obstacles to a pact remain beyond the public debate on how far Iran must open its nuclear program to outside purview under any deal.

Iran’s supreme leader, Ayatollah Ali Khamenei, has for weeks rebuffed U.S. demands that U.N. nuclear monitors have access to military sites and nuclear scientists as they monitor Tehran’s commitments under a deal and probe allegations of past work on atomic arms.

Negotiators are concerned about a lack of headway on all issues. Russian chief delegate Sergey Ryabkov said Friday the “the rate of progress … is progressively slowing down.”

Negotiators have been meeting five days a week in Vienna over the past few weeks. The two diplomats are familiar with the progress of the talks and spoke shortly before a planned five-day round reconvened Wednesday. They demanded anonymity because they are not authorized to discuss the confidential negotiations.

Ways of implementing specific parts of the deal are supposed to be contained in four or five annexes to the main text of an agreement.

The diplomats described the draft of a main document as a patchwork of text and dozens of blank spaces because of stubborn disagreement on up to 10 elements crucial to any deal. Those details are to be included in four or five annexes, which remain incomplete.

Both sides remain publicly committed to June 30. Still, the diplomats said all nations at the table recognize that a delay up to July 8 is not a deal-breaker.

If U.S. Congress receives a deal by July 8, it has 30 days to review it before U.S. President Barack Obama could suspend congressional sanctions. Postponement beyond that would double the congressional review period to 60 days, giving both Iranian and U.S. opponents more time to work on undermining an agreement.

Any deal would cap nearly a decade of international efforts to restrict Iranian nuclear programs that could be turned toward making weapons.

Tehran denies any interest in — or work on — atomic arms, but wants negotiations with the United States, Russia, China, Britain, France and Germany to conclude with an end to sanctions imposed over its nuclear program.

The talks focus on ways to implement commitments by both sides reached in a preliminary deal in April. Iran agreed then to slashing the size of its uranium enrichment program for at least 10 years, as well as re-engineering a nearly built reactor to minimize its output or plutonium — like enriched uranium a potential pathway to nuclear weapons.

It also has agreed to give experts of the U.N.’s International Atomic Energy Agency unprecedented monitoring authority to ensure that Tehran is hewing to its commitments, as well as more leverage in following up on the allegations of past nuclear weapons work.