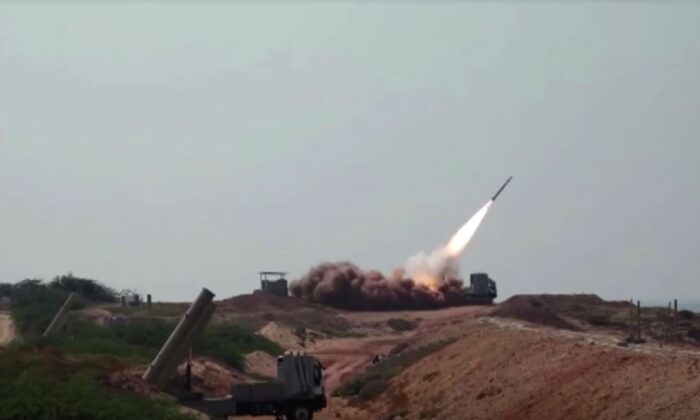 Various of missiles being launched from ground vehicles, during an Iranian military drill, at an unknown location, in Southwest Iran, on Dec. 21, 2021. (Reuters/Screenshot via The Epoch Times)
International

“The use of ballistic missiles by the Revolutionary Guards’ navy is a new concept … and they hit their targets with 100 percent precision,” Guards chief General Hossein Salami told the broadcaster.

Iran says its ballistic missiles have a range of 2,000 km (1,200 miles) and are capable of reaching arch-foe Israel and U.S. bases in the region.

On Monday, Iran warned of a “crushing” response to any move against it by Israel, which opposes efforts by world powers to revive Tehran’s 2015 nuclear deal and has long threatened military action if diplomacy fails to prevent it from acquiring a nuclear bomb. Iran says its nuclear ambitions are peaceful.

Israel is widely believed to be the only Middle Eastern country with a nuclear arsenal.

The exercises also included the simultaneous firing of five cruise missiles and the launch of armed drones capable of hitting two targets each, Iranian media reported. The five-day drills began on Monday.