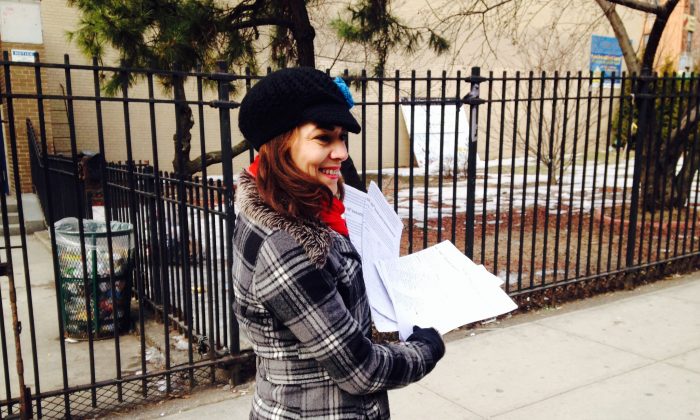 NEW YORK—I.S. 52, a middle school in Inwood neighborhood of Manhattan, now shares space with a charter high school, but the city plans on moving another high school into the same building. Angry parents and supporters held a rally today calling for the city to reverse its decision.

Parents said that if another high school is co-located at the school, the building will be over capacity. Bathrooms and the cafeteria will be overcrowded, and middle school students will lose one of their most valuable classrooms—the science lab.

The school has three labs, one of which is already used by the co-located high school. If a second high school comes in, it will occupy another lab. As a result, the entire middle school will end up sharing one lab.

Mayor Bill de Blasio and Education Chancellor Carmen Fariña recently announced the city will expand after-school programs for middle school children. But the parents at I.S. 52 said that even the basic needs of the students will be taken away if a second high school moves in.

The school that the city is planning on moving in will offer a career and technical program that will serve students up to 20 years old.

“I don’t want to have my son and my daughter in this school with a bunch of 20-year-olds that they cannot mingle with,” said Moreno. “By law, adults in this school cannot be mingled with [middle school] students in the same bathrooms, the same cafeteria. So how are we going to do that?”

The parents, led by Valdez, have collected over 2,700 signatures asking the DOE to stop the co-location from happening. As an alternative, they suggest that the new high school move into a vacant space at 183rd Street.

“We’re also saying that if this goes through, it is going to result in the loss of the ability for these schools to give the mandated services they need to, and for that we’re going to end up seeing the city in court.”

Just days ago the mayor announced that he would stop three charter schools under Success Academy from moving into public school spaces. However, the mayor actually approved the Department of Education’s plan to co-locate a number of other schools with existing public schools.

CORRECTION: A previous version of this article incorrectly identified the location of I.S. 52, a middle school. The Epoch Times regrets the error.