Investor Pessimism Jumps to Levels Not Seen in Nearly 13 Years 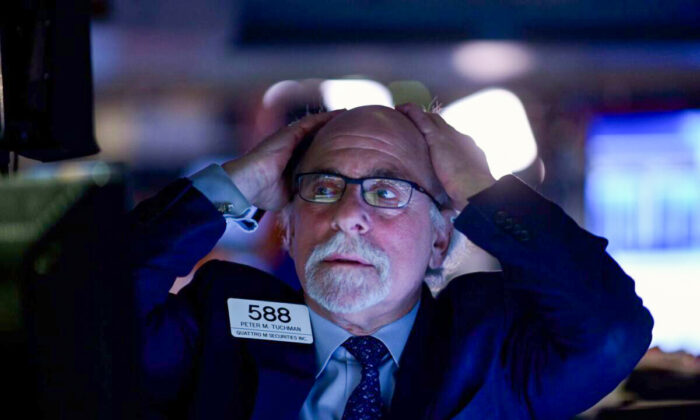 Investors are becoming increasingly bearish on stocks as persistently high inflation has compelled the Federal Reserve to hike rates aggressively, with Bank of America analysts and the American Association of Individual Investors (AAII) both saying that investor pessimism has hit levels not seen since around the time of the financial crisis of 2008–09.

The latest sentiment survey from AAII shows that the percentage of individual investors describing their six-month outlook for stocks as “bearish” rose sharply by 14.9 percentage points, to 60.9 percent. The last time the AAII investor pessimism gauge was higher was in March 2009, when it hit 70.3 percent.

Bank of America analysts said in a recent research note that investors are flocking to cash as they shun risk assets, with investor sentiment “unquestionably” the worst since the financial crisis.

Bullish sentiment, meanwhile, remained below its historical average of 38 percent for the forty-fourth consecutive week, AAII said. The organization said its bullish sentiment measure fell by 8.4 percentage points, to 17.7 percent, which is among the 20 lowest readings in the history of the survey.

“Unusually high bearish sentiment readings historically have also been followed by above-average and above-median six-month returns in the S&P 500,” AAII said, which suggests a rally in U.S. stock could be in the works.

Room to ‘Catch Down’

Some market analysts expect more downside for U.S. stocks as economic indicators flash warning signs and as the Fed is on a rate-hiking cycle.

“With tightening monetary policy, an ongoing global growth slowdown, and relatively elevated valuations, the path of least resistance continues to be lower for the equity market,” Nick Reece, vice president of macro research and investment strategy at Merk Investments, told The Epoch Times in an emailed statement.

“Rising nominal and real interest rates continue to pressure valuation multiples, particularly for large-cap growth stocks. The market looks like it has room to ‘catch down’ to where real rates are currently, and there is a strong chance real rates continue to rise based on the Fed’s framework,” Reece added.

Federal Reserve Chair Jerome Powell told reporters at a press conference on Sept. 21 that inflation was “running too high” and warned that rates are heading higher and poised to stay at a restrictive level for “some time.”

Meanwhile, a key economic gauge from the Conference Board dropped for the sixth month in a row in August, with a “major driver” being the Fed’s aggressive rate hikes.

The Leading Economic Index (LEI) for the United States, which is a forward-looking gauge made up of 10 individual indicators, fell by 0.3 percent in August, the Conference Board said on Sept. 22.

“The U.S. LEI declined for a sixth consecutive month, potentially signaling a recession,” Ataman Ozyildirim, senior director for economics at the Conference Board, said in a statement.

While the U.S. economy met the common rule-of-thumb definition for a recession when gross domestic product (GDP) printed negative for two quarters in a row earlier this year, recessions are formally called by a panel of economists at the National Bureau of Economic Research (NBER).

NBER economists use a broader definition than the two-quarter rule, relying on a wide range of indicators, including the labor market, which has remained on relatively solid footing.

There are signs, however, that the tight labor market is starting to loosen. The most recent U.S. government jobs report showed moderate wage growth and a rise in the unemployment rate, to 3.7 percent.