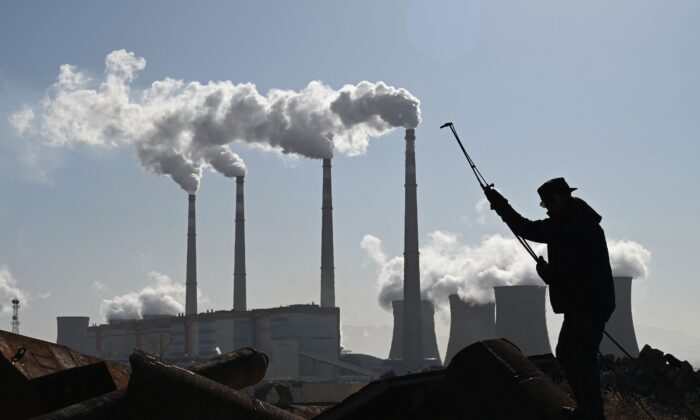 During the Chinese Communist Party’s (CCP) 20th National Congress, China’s ruling regime claimed that it has been more effective in managing the environment over the past decade, citing official data. However, a Chinese investigative journalist revealed a drastic deterioration of the environment in mainland China that may not recover for decades.

Zhai Qing, vice minister for the Ministry of Ecology and Environment, said at a press conference that under the guidance of “Xi Jinping and the thought of ecological civilization” over the past 10 years, the party has made overall advances in China’s ecological and environmental protection.

He claimed numerous achievements, including the fastest improvement in air quality in the world, the country’s improved safety rating for the drinking water of 770 million people, and the restoration and increase in population of more than 300 kinds of rare and endangered wild animals and plants.

Regarding the official claims, mainland Chinese investigative reporter Zhao Lanjian told The Epoch Times on Oct. 23 that China’s air pollution, groundwater pollution, soil pollution, and other concerns all remain at shocking levels. People’s anti-pollution protests have been suppressed, investigative reporters have been silenced, and only CCP officials from the Ministry of Environment brag about the state of China’s environment.

“He [Zhai] is bragging about how well the CCP manages the environment. All the questions at the press conference are prepared in advance, and its data cannot be trusted.”

The CCP’s environmental protection policies and its economic development model are contradictory, Zhao points out.

“Some protected natural resource landscapes have been developed for quick commercial success in a predatory model, such as Zhangjiajie or Changbai Mountain.”

“I have visited Changbai Mountain four times; the earliest visit was in 1994 and again in 2015,” Zhao said, referring to a mountain in northeastern China’s Jilin Province near the border with North Korea. “I found out that the natural reserve has been plundered and artificially developed, and all the scenic spots in China are facing the same problem.

He compared the situation with other countries.

“I have visited ecological parks in many countries, such as the United States and Chile, where people are not allowed to build roads nor to develop commercial tourism. However, China puts the tourist economic model in first place; puts tourism revenue from selling tickets in first place.”

Zhao said that he has spent 10 years investigating the ecological status of places along China’s Yangtze River and Yellow River in Qinghai, as well as Tibet and Inner Mongolia, and has witnessed the devastation of the same predatory development model on the natural environment.

In 2018, Zhao went to various areas of Sanjiangyuan, on the Tibetan plateau in the south of Qinghai Province, for field studies, and saw the extent of many new deserts. Compared with the maps in the past, “I found out that this desert was formed in the last 30 years. Thirty years ago, it was graveyards and swamps,” he said.

“The existence of this desert proves that at least the ecological environment of the Sanjiangyuan area has undergone shocking changes compared with 30 years ago,” Zhao said. “I interviewed some experts, and they also believed that the desertification of the upper reaches of the Sanjiangyuan has actually caused the water shortage in Shanghai and the entire Yangtze River system.”

Sanjiangyuan, which literally means “The Source of the Three Rivers,” is the birthplace of the Yangtze, Yellow, and Lancang rivers. It’s known as the “Chinese Water Tower” and plays an important role in China’s ecological status and national economic development.

“Everyone can see the deterioration of China’s ecological environment now, such as the cut-off of the Yangtze and Yellow Rivers and many water systems,” Zhao said. “The cutoff of such water systems will also affect the development of agriculture, animal husbandry, and fisheries along the rivers. Therefore, no matter how good the government’s slogan is about these environmental issues, the reality is visible to everyone.”

CCP leader Xi emphasized two points about the environment in his speech at the 20th National Congress: that the party will be “deeply promoting the prevention and control of environmental pollution, and further promoting the ecological protection and management of important rivers, lakes, and reservoirs.”

Zhao said of Xi’s comments: “The issues of environmental protection and ecology are imminent and he had to mention it. When we noticed that the environment has changed, the environment has actually already been deteriorating to a certain extent. The development model of the entire society is on the verge of crisis.”

Zhao’s 2014 report revealed shocking pollution in the Tengger Desert. Local herdsmen pointed out that sewage ponds had appeared in the desert hinterland, with local enterprises discharging untreated wastewater into the ponds. The regime has since deleted his articles and photos from the internet.

“China has tightened control of the media since 2014, and investigative reporters have been severely suppressed,” Zhao said.

At the same time, large-scale anti-pollution demonstrations by tens of thousands of people have emerged one after another across China, all of which have been brutally suppressed by the CCP’s military and police.

The groundwater in 90 percent of China’s cities is polluted because of the deep underground discharge of sewage by enterprises. And a public welfare activist has made a “Map of Cancer Villages in China.” Due to pollution, there are thousands of cancer villages across the country, Zhao said.

Read More
Hindering Freedom of Speech, Freedom of Thought, and Ultimately the Truth | Truth Over News

“How is China’s current environment?” he asked. “The final evaluation system is in the hands of the government.”

He pointed out that “after Xi Jinping advocated green mountains and rivers, the local governments have not been able to restore green mountains. As a result, plastic green plants were spread from the top of the mountain layer by layer, and the bare mountain became an artificial green mountain. There were many places where ‘green’ mountains were sprayed with green ink and paint.”

Li Yun and Luo Ya contributed to this report.