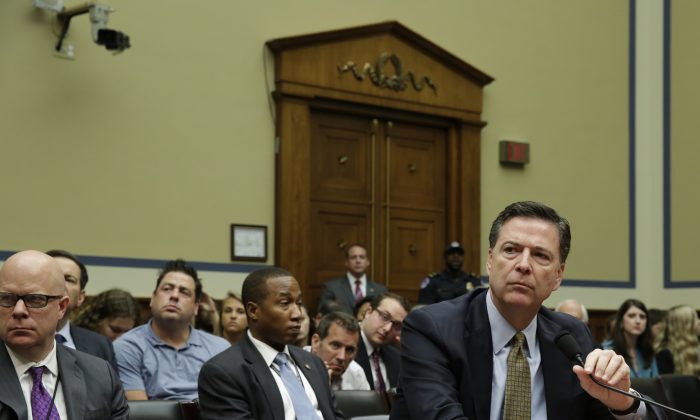 Despite Email Probe Fallout, Clinton Could Remain Unhurt in Polls

While an investigation into Hillary Clinton’s use of a private email server has been closed by the Justice Department, the political fallout from the investigation is likely to continue to follow her.

FBI Director James Comey said in a press briefing on July 5 that he thought no criminal charges should be filed against Clinton, but did describe the handling of emails by her and her staff as “extremely careless.” He also contradicted Clinton on key claims she made about the use of her private email server.

Testifying before the House Oversight and Government Reform Committee, Comey said that Clinton had made statements about her emails that “were not true.”

“For a candidate who already had significant issues with voters on honesty and trust, her problems just got a lot worse,” said Neil Newhouse, Mitt Romney’s campaign pollster in 2012, about the results of the FBI investigation, in an email.

“It may have effectively ended her legal problems, but it put her political problems front and center,” he said.

Clinton has been plagued throughout her campaign for president by questions about her trustworthiness. A Washington Post-ABC poll in March this year showed that 59 percent of respondents thought she was not honest and trustworthy.

But despite those concerns by the public she is ahead of her opponent, Republican presumptive nominee Donald Trump, in most polls.

The FBI investigation, alongside an investigation by the Select Committee on Benghazi, have also done little to sway Democratic voters from picking Clinton as their nominee in the primary season.

The political response to the outcome of the FBI investigation has primarily been along party lines. Republicans have questioned why no criminal charges were filed, while Democrats have pointed to Republicans’ focus as a partisan witch hunt.

Meanwhile, Speaker of the House Paul Ryan recommended that Clinton be barred from getting classified briefings as a presidential nominee, a typical practice for nominees on both sides of the aisle.

“There is no legal requirement for you to provide Secretary Clinton with classified information, and it would send the wrong signal to all those charged with safeguarding our nation’s secrets if you choose to provide her access to this information despite the FBI’s findings.”

Separately, Ryan also sent a letter to Comey on July 6 asking him to release all the unclassified material from the investigation, saying that he and many others “struggles to reconcile” the case laid out against Clinton with the decision not to prosecute.

Similarly, other Republicans expressed their mystification at the fact that no charges have been brought against Clinton.

“We’re mystified and confused by the fact pattern you laid out and the conclusions you reached,” the Oversight Committee chairman, Sen. Jason Chaffetz (R-Utah), told Comey in his opening remarks.

“It seems there are two standards and there’s no consequence for these types of activities in dealing in a careless way with classified information,” he continued.

Chaffetz concluded that if the “average Joe” handled classified material in the same way Clinton did, “they’d be in handcuffs.”

Democrats, on the other hand, have sought to show that the Republicans are rejecting the FBI director’s conclusion because it’s not an answer they wish to hear.

“I want to make it clear that I condemn these completely unwarranted political attacks against you,” Sen. Elijah Cummings (D-Md.) told Comey.

Other Democrats echoed praise for Comey’s integrity and objectivity, and pointed out the fact that Republicans were equally praiseworthy in the weeks leading up to the announcement.