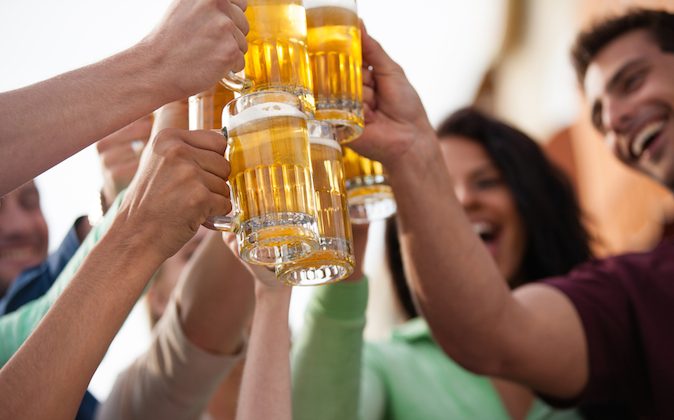 International Beer Day was the brainchild of Jesse Avshalomov, and the day was founded by Avshalomov, Evan Hamilton, Aaron Araki, and Richard Hernandez in 2007.

Back then, Avshalomov and his friends decided that “there needed to be a day in celebration of all things beer, a day in thanks to the people who produce and provide our favorite beverage.”

The guys proceeded to invent “International Beer Day, convinced our local bar to celebrate, made a little website for it, gave thanks to the beer industry, and had a good-ol’ time.”

People around the world eventually found the website and held celebrations of their own.

Since then, Avshalomov and pals have been “working each year to bring the celebration to more and more people.”

Today, there is even a Facebook page for the event.

Check out some facts about quotes about beer, and some facts below that:

“He was a wise man who invented beer.” — Plato

“Milk is for babies. When you grow up you have to drink beer.” — Arnold Schwarzenegger
“Give me a woman who loves beer and I will conquer the world.” — Kaiser Wilhelm

“Give a man a beer, waste an hour. Teach a man to brew, and waste a lifetime!” — Bill Owen
“24 hours in a day, 24 beers in a case. Coincidence?” — Stephen Wright
“Now son, you don’t want to drink beer. That’s for Daddies, and kids with fake IDs.” — Homer Simpson
“I never had one beer. If I bought a six-pack of beer, I kept drinking till all six beers were gone. You have to have that kind of understanding about yourself. I haven’t had a drink now in 12 years.” — Samuel L. Jackson
“You can’t be a real country unless you have a beer and an airline. It helps if you have some kind of a football team, or some nuclear weapons, but at the very least you need a beer.” — Frank Zappa

– The first beer recipe was written by the Sumerians 4,000 years ago.

– The ancient Babylonians were the first to brew beer.

– George Washington brewed his own beer in Mount Vernon.

– Washington also insisted that his troops be given a quart of beer as part of their daily rations.

– Likewise, the builders of the Great Pyramid of Giza were paid with a daily ration of beer.

– In the Middle Ages, beer was considered safer than water because of the alcohol.

– One of the moon’s crater is named Beer.