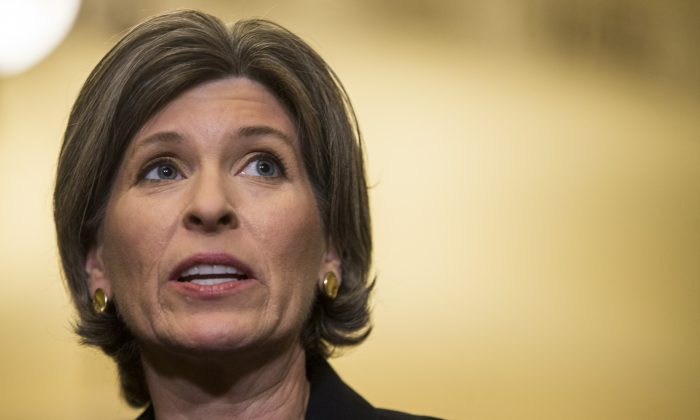 A confidential internal Department of Defense (DOD) report concludes that “China, not the United States, is the ultimate beneficiary of DoD and other [U.S. government] research investments,” according to Sen. Joni Ernst (R-Iowa).

“Washington is spending billions of your tax dollars every year to hypothetically achieve technological dominance over communist China, but the ultimate beneficiary of that effort may be … China,” Ernst said in a Sept. 28 statement made available to The Epoch Times.

“That is the shocking conclusion of a Department of Defense (DoD) review that found China was stealing technology developed in the United States by exploiting the Small Business Innovation Research (SBIR) and Small Business Technology Transfer (STTR) programs.”

“This is how it works: American companies receiving taxpayer assistance for technology development from DoD and other agencies are recruited by China to continue their work at institutions associated with [the] People’s Liberation Army,” Ernst said.

“The U.S. company is then dissolved and the research and intellectual property paid for [with] U.S. tax dollars is transferred to a subsidiary in China. Just like that, American-made ingenuity is shipped overseas to our leading global adversary … and we, the American taxpayers, are funding it.”

Key to the process is the ability of Chinese intelligence agents to recruit assets within the companies doing the research funded by U.S. tax dollars, according to Ernst, who cited an example included in the report, which hasn’t been made public.

“A researcher and the co-founders of a now-dissolved company that received four grants to develop technology for spacecraft and drones, for example, were allegedly recruited by the Chinese government and now work for institutions affiliated with the communist regime’s defense agency,” she said.

The result is that “tens of millions of your tax dollars were spent on the development of other technologies, including broadband, biohazard detectors, solar energy, designs for military devices, and pharmaceuticals, that were all transferred to China.”

Ernst said in her statement that she’s giving her latest Squeal Award to “all of the government agencies that have allowed these double-crossing companies to take your money and run off to China with the breakthroughs that rightfully belong to the United States.”

Ernst isn’t alone in her concern, as Sen. Rand Paul (R-Ky.) said earlier this year that he’ll oppose recertifying the SBIR program unless it’s made secure against Chinese efforts to subvert it.

A spokesman for Paul, who asked to not be named, told Defense News in June that “there are currently severe risks to national security when China continues to steal technology seeded by this program.

“Dr. Paul will not reauthorize this program without reforms to strengthen research security and stop abusive behavior by bad actors lining their pockets with taxpayer dollars at the expense of new small businesses with emerging technologies being able to access SBIR awards.”

Concerns about the vulnerability of U.S. technology research efforts aren’t new, with a result that the SBIR program, in particular, faces an uncertain future, despite the fact that it’s one of such key efforts.

“Eleven different government agencies are required to participate in the program, with the DOD accounting for over half of spending, or about $1.7 billion out of an annual total federal expenditure of roughly $3.2 billion,” Wessner and Shivakumar wrote.

“The program is unique in its focus on leveraging the creativity and drive of small businesses in the United States to address pressing government and societal needs in defense, health, energy, space, and engineering.”