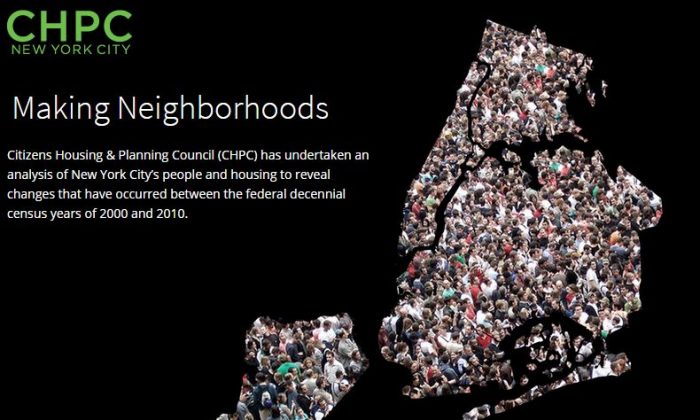 When it comes down to it, the big, diverse city of New York can be broken down into 14 distinct groups.

Rather than looking at government-drawn boundaries like Community Districts (created in the 1970s), a new project created by the Citizens Housing and Planning Council (CHPCNY) used cluster analysis to track demographic shifts from neighborhood to neighborhood over a decade.

Cluster analysis is a strategy that takes all the data and groups it into shared traits. That means a clearer picture of where the different demographics are moving within the city from 2000-2010.

The report analyzes the information through the lens of tackling the housing crisis. It found that the areas most affected tend to have more lowrise and 1-4 unit buildings—housing stock typically not taken into consideration for affordable housing preservation.

The largest cluster is low-income Hispanic families, according to the CHPC report released Wednesday as a part of its Making Neighborhoods project. There are over 1 million people in these clusters.

It should be worrying, the report notes, because there are no middle or high income Hispanic clusters.

At the same time, the number of upper-middle income black families decreased, by nearly 20 percent in clusters. Citywide the black population fell 5 percent. Most of the loss came from predominantly black neighborhoods that also saw an increase in low-income black families over the same period.

Clusters of high and upper-middle income whites grew the most over the decade, mostly in neighborhoods that were originally racially diverse but now less so, according to the report.

There was also an increase of mixed white-Asian communities in neighborhoods that were predominantly white clusters, like Yorkville, Bensonhurst, and North Riverdale.

The report crossed demographics with housing code violations and found that, unsurprisingly, low-income clusters tend to have poorer housing conditions.

What has been most devastation to neighborhoods and the housing stock is the concentration of foreclosures, the report concludes. There were many concentrated in rental buildings and not just owner-occupied buildings.

“This work suggests that government should focus on neighborhoods with small owner-occupied and walk-up multi-family units where housing conditions are fragile and populations are vulnerable,” the report states.

In housing preservation efforts, government usually focuses on large multi-family buildings with tens of units and families. But according to the analysis, tracts with 1-4 unit homes and low-rise buildings are ones that have seen the most dramatic demographic shifts.

“This trend poses a challenge to housing preservation strategies,” the report warns.

Housing Commissioner Vicki Been has talked about offering owners of smaller buildings energy retrofits in return for preserving affordability.

The buildings are often old, and upgrading boilers and water systems is expensive for a small building owner. The hope is that rather than selling the buildings or opting out of affordable housing programs, the retrofits will incentivize preservation, Been has said.