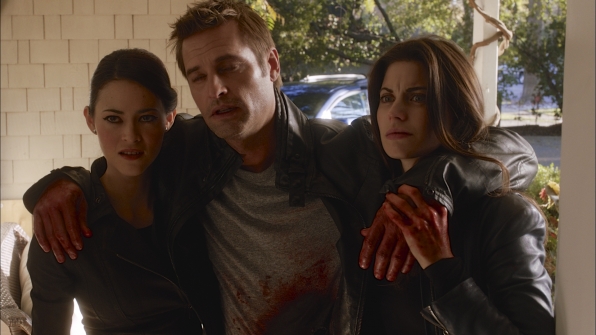 Intelligence season 1 on CBS wraps up on March 31 with episode 13.

The episode, titled “Being Human,” will include some shocking action.

Gabriel and Riley learn that foreign sleeper agents are embedded in the United States government.

And they find out that their identities are revealed.

The shock comes after Gabriel was shot when he, Riley, and the rest of the team caught Mei-Chi in episode 13. Someone tried to shoot Mei Chen, who revealed that she was hired by someone in the U.S. government to frame Gabriel.

Season 2 for Intelligence hasn’t been confirmed yet, meaning the show is on the bubble.

Renewal or cancellation of the show will happen by mid-May.

Photos from the season finale give some interesting hints into some of the things that will happen, particularly one photo of Gabriel surrounded by some type of projections or robots. His mother also appears to be in some type of danger, holding a gun shakily.

See photos from the season finale below.