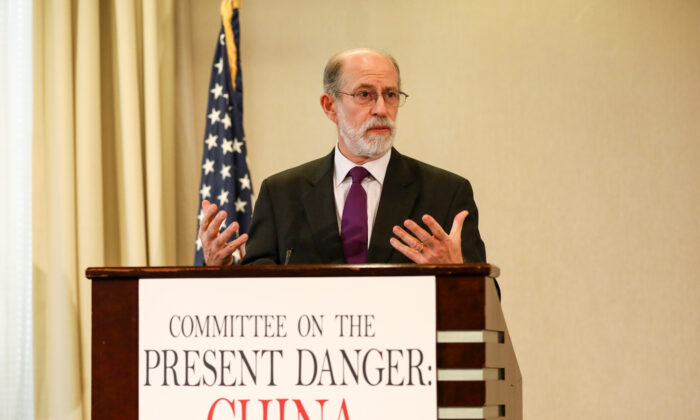 Frank Gaffney, committee vice chairman and president of the Center for Security Policy, speaks at the launch of the Committee on the Present Danger: China, at the Reserve Officers Association in Washington on March 25, 2019. (Samira Bouaou/The Epoch Times)
cover-up

The intelligence community (IC) under the Biden administration failed to tell the truth to Americans in relation to the origin of COVID-19, according to Frank Gaffney, executive chairman at the Center for Security Policy.

“We judge the virus was not developed as a biological weapon,” the report stated. Chinese officials, according to the IC, had no “foreknowledge of the virus” before the initial outbreak of COVID-19 emerged.

Yet, according to Gaffney, findings in his recent book point to different revelations.

“It’s sort of an indictment of the biases of this administration, that it wasn’t able to speak truthfully about the evidence as we did,” he told the “China in Focus” program on NTD, sister media outlet of The Epoch Times.

Gaffney explained what was reported in the book he co-authored, titled “The CCP is at War with America.”

“A lot of circumstantial evidence, nonetheless, that it came from the Wuhan Institute of virology, a biological warfare laboratory that the Chinese Communist Party is actually not supposed to have,” he said.

“We know, however, this virus got out of that laboratory, whether it was by accident or by design, the Chinese Communist Party deliberately, knowingly, and murderously unleashed it on the rest of the world, including our own country,” he added.

Gaffney stressed that his book was all based on open source material.

“We just took the time and put the energy into really assessing it and came away with conclusions that the intelligence community could have come to every bit as easily, if not more so,” he noted.

Gaffney further pointed to the book’s brief, which he described as a “35-minute presentation of what the Chinese Communist Party is about, what it’s been doing to its own people horrifically, to not just the Uyghurs … the Falun Gong … the Catholics and other Christians, but to the population of China writ large for decades, on people who love freedom, people who do not want to live under communism, people, in short, like us.”

According to the Gaffney, the material can be an educational tool, especially for candidates in the midterms elections.

“Because … all of those levels of our government are being targeted by the CCP,” he noted.

“We can use it as a means of getting candidates to commit to do something about it,” he added.

Gaffney recalled the mandate that former President Ronald Reagan pushed for back in 1980 in a bid to call for Americans to “roll back and defeat the totalitarian communist threat of that time, what he used to call an existential threat to freedom.”

In Gaffney’s opinion, the United States is now dealing with  the Chinese Communist Party, a vastly more dangerous threat than the Soviet Union was in its heyday.

Thus, the country is in need of “a similar mandate, given to elected officials to take steps to counter rollback to defeat the Chinese Communist Party, because they are at war with us.”

He pointed out that the Chinese regime has “induced greedy American leaders of business and the financial sector or our political class or others, to participate in building up the CCP’s power.

“And they are certainly saying, ‘Hey, wait, you know, we don’t want to disengage. We don’t want to uncouple. This is a really good thing. We’re doing very well.’ Well, they personally may be, but our country is being imperiled by it, as is the rest of the world,” he said.

“So I think I would say to people who make that argument: you are either with us and standing for freedom, or you are with freedom’s enemies. You have to choose. And this is the time for making that choice,” he added.