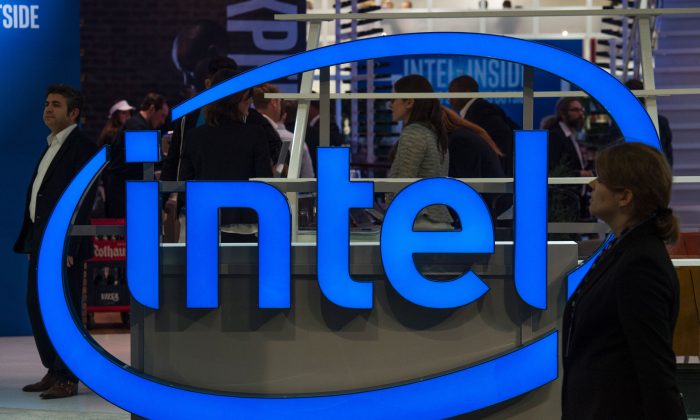 A logo of US semi-conductor giant Intel is on display at the Digital Business fair CEBIT in Hanover, central Germany, on March 15, 2016. (John Macdougall/AFP/Getty Images)
Companies

“The investment will help boost production to meet the surging demand for advanced semiconductors, powering a new generation of innovative products from Intel and serving the needs of foundry customers as part of the company’s IDM 2.0 strategy,” the company said in a statement.

The move is part of Gelsinger’s strategy to restore Intel’s dominance in chip making and reduce America’s reliance on Asian manufacturing hubs, which have a tight hold on the market.

The initial phase of the project, which spans around 1,000 acres in Licking County, will bring 3,000 Intel jobs and 7,000 construction jobs, Intel said.

“Intel’s new facilities will be transformative for our state, creating thousands of good-paying jobs in Ohio manufacturing strategically vital semiconductors, advanced manufacturing, research and development, and talent,” he said in a statement.

While chipmakers are scrambling to boost output, Intel’s plans for new factories will not alleviate the current supply crunch, because such complexes take years to build.

Gelsinger reiterated on Friday he expected the chip shortages to persist into 2023.

To dramatically increase chip production in the United States, the Biden administration aims to persuade Congress to approve $52 billion in subsidy funding.

U.S. House Speaker Nancy Pelosi (D-Calif.) said on Friday that the House would soon introduce a bill on competitiveness to help bolster semiconductor investment and supply chains, which would include the $52 billion in funding.

President Joe Biden touted Intel’s investment on Friday at a White House event with Gelsinger and again made the case for congressional action.

“China is doing everything it can to take over the global market so they can try to out-compete the rest of us,” Biden said.