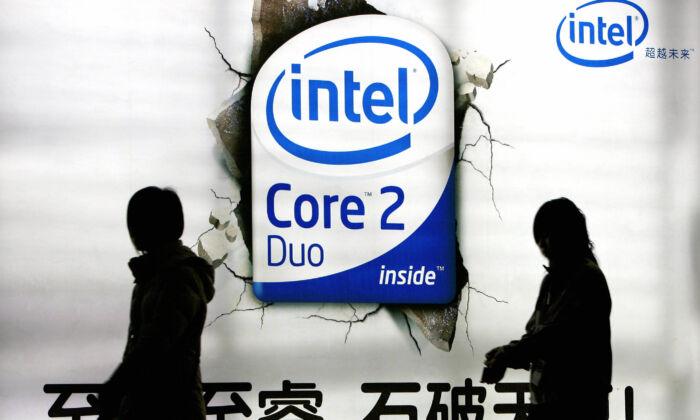 Chinese shoppers walk past an advertising billboard of the U.S. chip giant Intel on display at a shopping mall in Beijing, China, on March 26, 2007. (Teh Eng Koon/AFP via Getty Images)
China Human Rights

Intel stoked nationalist fervor in China by asking suppliers not to source products or labor from the northwestern region of Xinjiang, where more than 1 million Uyghurs are held in detention camps.

The U.S. chipmaker posted an apology on its official WeChat and Weibo accounts on Dec. 23 for the “trouble” it caused to Chinese customers over its stance on Xinjiang.

In a Chinese-language statement, Intel said that its commitment to avoid supply chains from Xinjiang was an expression of compliance with U.S. law, rather than a statement of its position on the issue.

“We apologize for the trouble caused to our respected Chinese customers, partners, and the public. Intel is committed to becoming a trusted technology partner and accelerating joint development with China,” it said.

The backlash stemmed from what Intel described as an annual letter to suppliers. Screenshots of the open letter in Chinese, English, Japanese, and other languages trended on Chinese social media in the past two days after being posted by Chinese netizens on Twitter-like Weibo.

“Intel is required to ensure our supply chain does not use any labor or source goods or services from the Xinjiang region,” the letter reads, flagging concerns over potential forced labor abuses against Uyghurs and other Muslim minorities.

The hashtag #IntelToBanXinjiangProducts generated about 300 million views and 200 million comments by users in over one day.

Intel has since fired up disputes as Chinese netizens lashed out at the human rights accusations over Xinjiang. Beijing has repeatedly denied the claims.

“Eat Chinese rice and then smash China’s pot,” some netizens wrote, calling for an apology.

On Dec. 22, Karry Wang, lead singer of China’s popular boy band TFBoys, said he would no longer serve as the brand ambassador for Intel. “National interests exceed everything,” Wang said in a statement.

“What we need to do is to make it increasingly expensive for companies to offend China so their losses outweigh their gains,” the newspaper said in an editorial.

The spat comes as President Joe Biden is about to sign the Uyghur Forced Labor Prevention Act, which the Senate approved on Dec. 16, to ban all imports from Xinjiang.

The U.S. government has already banned all cotton, tomato products, and some solar panel materials from Xinjiang over forced labor concerns.

On Dec. 23, Chinese Foreign Ministry spokesman Zhao Lijian said during a daily briefing that companies rejecting Xinjiang products will be at their own loss.

China has been Intel’s largest revenue generator for six consecutive years since 2015.

The California-based chip giant entered the Chinese market in 1985 and generated $20.26 billion in China in 2020—26 percent of its total revenues—followed by Singapore, the United States, and Taiwan.

Some multinational companies have found it increasingly hard to comply with Xinjiang-related trade sanctions while continuing to operate in China, one of their biggest markets. A dozen brands have already felt Beijing’s wrath, as Chinese celebrities—faced with naming and shaming by Chinese internet trolls—moved quickly to cut ties.

Earlier this year, Nike, H&M, Tommy Hilfiger, Converse, Puma, and Calvin Klein have triggered a full boycott and lost their brand ambassadors over their stance on China’s human rights abuses.

However, questions arose among Chinese netizens regarding the practicability and effectiveness of boycotts.

“In fact, we all know that we cannot fully boycott Intel, nor do we have the stamina to do so,” a Weibo user named “Cycling Pals” said in a Dec. 23 post. “Because there are no alternatives,” he said.

“The last H&M incident has just subsided, their products are still selling like hotcakes,” another wrote, referring to a nationwide boycott of the brand for speaking out about forced Uyghur labor in Xinjiang this March.