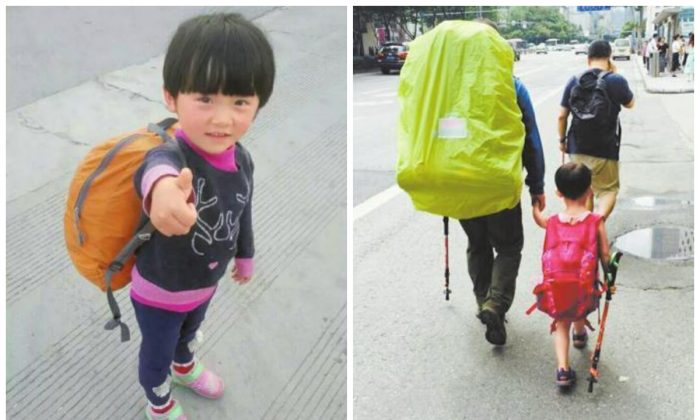 Wen Wen and her father in Chengdu, capital of Sichuan Province, on June 13. They will start their journey from here. (via Sina Weibo)
China

Instead of Kindergarten, Parents of 4-Year-Old Girl Send Her Backpacking Across China

Instead of spending the hot Chinese summer enjoying ice cream and air conditioning like her friends, four-year-old Wen Wen will travel with her father in the mountains of Sichuan and Tibet to learn, as her mother says, the things that aren’t taught in school.

Called “China’s youngest backpacker,” Wen Wen, as her family refers to her affectionately, has been making such trips by foot three months after she learned to walk. For three years, instead of attending preschool, she has spent months on the march—eating wild herbs and sleeping in tents while making 10 kilometers (about 6 miles) daily.

Wen Wen’s parents say that the backpacking trips are a valuable part in her upbringing and will keep having her walk until she has to attend elementary school, the West China Metropolis Daily reported on June 16.

Move Over Tiger Moms—This ‘Eagle Dad’ Made His Son Run Through Snow at Age 4, and Now Has Him on a Crazy Study Schedule
Related Coverage

“She should get a feel for this world,” Yuan Duan, Wen Wen’s mother, told West China Metropolis Daily. “Some things cannot be taught by teachers and textbooks.”

Responding to criticism that their treatment of Wen Wen was extreme, father Pan Tufeng said that modern children are overly spoiled. “You have to let them suffer a bit so that they will learn to cherish what they have and to be independent,” he said.

Pan and Yuan owned a small business in Jiangxi Province before moving their work online so as to be able to assist their child’s roadway education.

Despite widespread criticism the family has gotten from internet critics, usually, over not sending Wen Wen to preschool, Pan is confident in his methods. “It’s more useful for her to develop a strong constitution and ability to endure hardship,” he said. “After that, other things will be simple.”

Some internet users expressed concern and disagreement with the methods.

“This sort of parent is ignorant and irresponsible,” one comment on social media reads. “Before the end of elementary school and especially before six or seven years of age, the company of family and peers is the most important. You have to let [children] learn to be social in order to best develop a sense of security.”

Others felt the parents were admirable for blazing their own trail in the upbringing of their daughter.

“Finally, someone who dares do as they see fit!” a user wrote. “It’s indeed a joy to educate children using one’s own methods, unlike those of us who think the only way is to put them in kindergarten. I myself had considered keeping my children out of kindergarten and teaching them myself, but did not have the courage to stand up to the conventional.”

Wen Wen’s typical day on the march includes five hours of walking. She has carried her own clothing and pack since last year, when she was three.

Sometimes the girl is stubborn and, her feet hurting from aches and blisters, refuses to keep moving. The parents ignore her complaints and tell her they will continue the trek with or without her. In the end, Wen Wen always gets back up.

“Young children are just like that,” her father said. “The more you spoil them, the more delicate they become.”